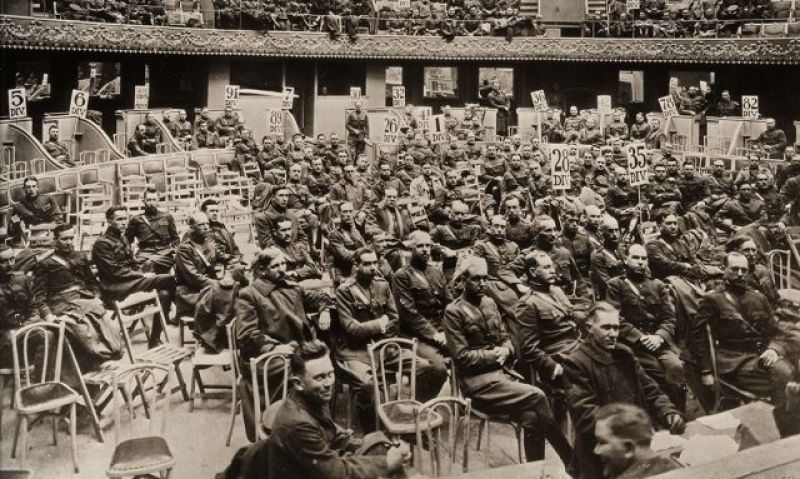 The American Legion is 100 years old.

The organization’s 55 departments and nearly 12,500 posts across the country and around the world are celebrating a century of service to community, state and nation that began in Paris March 15-17, 1919, when war-weary members of the American Expeditionary Forces gathered for a “morale conference” that led to the creation of what would become The American Legion. Only 300 troops were expected to attend. Officially, 463 registered. Some have estimated that more than 1,000 came and went, with or without orders, during the weekend that launched a century of accomplishments unforeseeable, if not unimaginable, at the time.

Lt. Col. Eric Fisher Wood, a leader in the prewar Preparedness Movement who was wounded fighting with the British before U.S. entry in the Great War and was later gassed during the Meuse-Argonne offensive while with the U.S. Army’s 88th Infantry Division, served as secretary of the Paris Caucus’ first session and called it to order nearly five hours after it was scheduled to start.

Fisher Wood, who originally wanted the new association to be named the Liberty League and later designed the emblem of The American Legion, was joined at the Paris Caucus by Col. William Donovan, who would go on to become the father of U.S. intelligence; future Secretary of the Treasury Capt. Ogden Mills; and fellow founder Lt. Col. George A. White, a former editor of the Portland Oregonian. But this caucus was not going to be about officers.

In a telegram to Lt. Col. Theodore Roosevelt, Jr., a week before the gathering, Fisher Wood stated simply: “Am inviting enlisted men.”

Pvt. George Munroe, who participated in the caucus, recalled in Thomas A. Rumer’s “The American Legion: An Official History, 1919-1989,” that he “saw no evidence of registration at the caucus. As far as I could see, anybody who happened to wander in could sit down and take part. It was somewhat of a madhouse. When I reported to the Cirque de Paris, I presented my travel orders to the soldier on duty at the door, and he looked me over, handed them back, and directed me to the section reserved for the 1st Division. After that, I came and went as I pleased.”

Amid the chaos, The American Legion formed its first four committees: Convention, Permanent Organization, Constitution and Name. Following the March 15 opening, the 15-member committees worked on their specific topics before reconvening March 17 before the entire group.

“We, the members of the military and naval services of the United States of America in the great war desiring to perpetuate the principles of justice, freedom and democracy for which we have fought, to inculcate the duty and obligation of the citizen to the state; to preserve the history and incidents of our participation in the war; and to cement the ties of comradeship formed in service, do propose to found and establish an association for the furtherance of the foregoing purposes.”

Language from his report would inspire the Preamble to The American Legion Constitution, which would be written and adopted in St. Louis two months later.

The committee tasked with naming the new organization reported 12 nominations:

On the final day of the caucus, Lt. Col. Thomas W. Miller of Delaware, a former member of Congress who enlisted as an infantryman in the Army after an unsuccessful re-election campaign, gaveled the March 17 meeting to order with an 1873 silver dollar, which he always carried with him.

The organization’s name, membership eligibility criteria, establishment of an executive committee and the preliminary drafting of a preamble to The American Legion Constitution were all on the agenda. Miller, who would later serve as a national American Legion Legislative Committee co-chairman and co-author of the organization’s federal charter, presided when “American Legion” was chosen after much debate, but only as a temporary name. The motion and adoption, according to most accounts, were accelerated by hunger, just before lunchtime.

In the Paris Caucus’ final hours, a U.S. Navy sailor dropped in to see what was going on. In his 1923 history of the Legion, Marquis James wrote that prior to his appearance “…there was present no delegate direct from the Navy. On the afternoon of the third day, a lone sailor wandered into the Cirque de Paris where the later sessions were held. He was immediately surrounded and asked whom he represented. ‘Nobody,’ stammered the embarrassed gob. ‘I thought there was a show going on in here.’”

On the evening after the final session of the caucus, the first American Legion Executive Committee gathered, chaired by Milton J. Foreman of Chicago, with White as secretary.

In his 1946 “A History of The American Legion,” author Richard Seelye Jones put their challenge this way:

“They were to promote an organization which would not take form until the following November. They had no funds whatever, no offices, no staff, no literature. They had been named the temporary executives of a great idea.”

White, who would serve in uniform the rest of his life, rising to the rank of major general before he died two weeks before the Pearl Harbor attack of 1941, recounted the aftermath of the Paris Caucus this way: “As near as we could calculate tangible assets, we possessed a pile of resolutions, the tentative name ‘American Legion,’ and a responsibility to do something along lines which we must determine … and promulgate.”

Over the next eight months, the early American Legion’s promulgations would attract some 685,000 members. Community posts sprang up across the country and around the world; some 5,400 that opened in 1919 continue to operate today. And The American Legion would take shape as a non-partisan association of wartime veterans dedicated to building a stronger nation through community service, veterans assistance, support for a strong national defense, patriotism and mentorship of youth.

The American Legion centennial period, which officially began Aug. 30, 2018, continues in earnest through Nov. 11, 2019, the 100th anniversary of the first national convention. The 101st National Convention, which is themed around the organization’s second century vision, will be in Indianapolis Aug. 23-29. Learn more about the convention at www.legion.org/convention/resources.

To learn more about The American Legion’s centennial and history, visit www.legion.org/centennial.