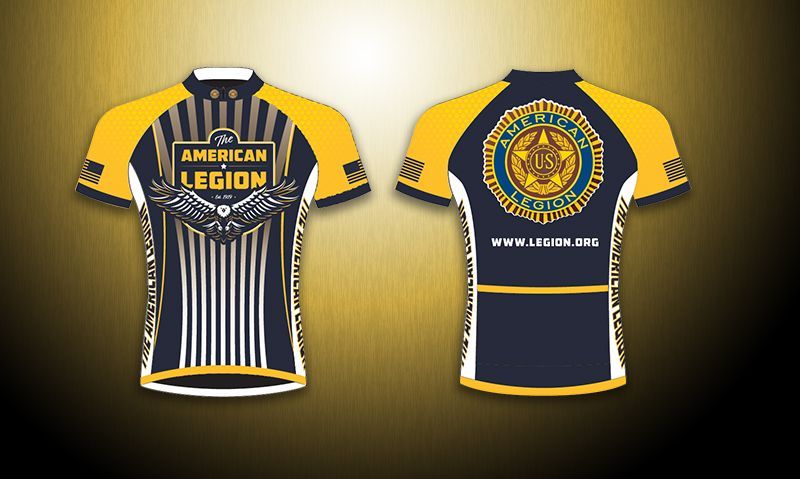 What started a bicycle ride challenge between two writers for the Des Moines News-Register in 1973 has evolved into the oldest, largest and longest recreational bicycle touring event in the nation. Over its 46 years, well over 320,000 riders have participated in the now seven-day event, which traverses Iowa across an average route of 468 miles.

And this July, The American Legion Department of Iowa – and the organization’s 100th anniversary – will be featured prominently in the Register's Annual Great Bicycle Ride Across Iowa, more commonly known as RAGBRAI.

A team of Legionnaires will take part in the July 21-27 ride, while July 22 will be designated as 100 Years of Celebrating The American Legion Day; the day’s route also makes stops in seven communities with active American Legion posts. That evening in Winterset, complimentary patches will be handed out between 6-9 p.m. to all American Legion members riding RAGBRAI while supplies last at American Legion Green Rogers Post 184, 84 W Green St.

The Department of Iowa also will have tents and/or booths set up as various stops along the way to provide information about The American Legion and services to veterans.

“We’re going to try to use the ride to raise awareness for what The American Legion does: the services we provide not only to veterans, but to our communities,” Department of Iowa Adjutant John Derner said. “We have always really been a part of RAGBRAI, because every time RAGBRAI comes through one of these little towns, our posts are represented there with food stands or other activities going on. We’ve had that association with them, really, since they began. It’s just a way for them to recognize us not only for our contributions to the RAGRBAI route, but also our contributions for the last 100 years.”

The ride includes participants from all over the country and foreign countries. Because of the event’s popularity, RAGBRAI officials now limit the number of riders who register for the entire week to 8,500, though thousands of others participate in portions of the ride each day. According to RAGBRAI, an estimated 36,000 riders were counted on the road from Perry to Des Moines in 2013.

Iowa Eighth District Commander Carl Anderson, who both rides in and is a ride ambassador for RAGBRAI, brought up with ride officials the potential of doing something in recognition of The American Legion Centennial. Anderson said the first time he participated in RAGBRAI the ride did a dedication to U.S. servicemembers. “I was impressed with it,” he said. “It was from that previous ride that gave me the inspiration to try to connect the RAGBRAI with The American Legion.”

It didn't take much back and forth to come to an agreement. “(RAGBRAI officials) organized a meeting with us, and we essentially showed up at the meeting and at that time they already had their mind made up that they were going to use The American Legion as one of the two charities they recognize this year,” Derner said.

Anderson said the response from RAGBRAI speaks volumes about the reputation of The American Legion. “It recognizes that our servicemembers have done a lot for the country,” he said. “It shows that they recognize The American Legion and the things that we do. And it didn’t take an act of God to try to convince them of that.”

American Legion Past National Commander Dave Rehbein, a life member of American Legion Post 37 in Ames, Iowa, said the organization will have a strong presence throughout the ride.

“Every day on RAGBRAI they have what they call a meeting town and an overnight town. So in those two locations every day we will set up (an American Legion) booth or tent,” Rehbein said. “We’ll have information to distribute. We will also have a service officer in that booth. If somebody wants to talk about a (Department of Veterans Affairs) claim, they can at least have some initial conversation and get hooked up with us.”

Having a service officer present is appropriate, Rehbein said, in part because The American Legion already represents nearly 60 percent of the veterans claims going through the Veterans Benefits Administration’s Des Moines Regional Office – more than any other veterans service organizations combined.

“I think we can use that in those booths to educate people that if you need help with a claim, here’s the people to talk to,” Rehbein said.

An American Legion team also will participate in the ride, an idea Derner said started after an American Legion post – Brian Gienau College Post 738 – was chartered at Hawkeye Community College in 2018. “We have a bunch of young Legionnaires that are members not only of that post, but some surrounding posts … and they had proposed to our department executive committee to form a team for RAGBRAI,” he said. “When we got into the 100th anniversary talks and everything else, it all just kind of fell together.”

Rehbein said The American Legion members who will ride in RAGBRAI “are young, they’re very proud to be Legionnaires, they’ve got a lot of initiative, and they want to share their enthusiasm.”

The team will wear a specially designed jersey that also is available for purchase in both a men's and women's sport cut. The jersey can be worn by any Legionnaire wanting to celebrate and promote The American Legion’s 100th anniversary. The jerseys are on sale until May 22 and are scheduled for shipping to customers by July 12.

“We know that there’s people from all 50 states that ride this thing,” Derner said. “If they want to buy the jerseys and ride in the name of The American Legion, they certainly can.”

Rehbein, chairman of The American Legion 100th Anniversary Observance Committee, said the organization’s high-profile participation in RAGBRAI is a result of previously successful efforts to promote the Legion.

“What we’re seeing out there is that opportunities tend to build on each other,” he said. “We have had some opportunities in the past doing other things. When you get an opportunity and you can execute it well, somebody sees that and you get bigger opportunities. I think that’s part of what drove the RAGBRAI people to us. We didn’t have to convince them.”

And because of that, this year's ride will have an added dimension for Anderson. “There are two loves that I have: The American Legion and cycling,” he said. “Being our centennial year, it does make this a bit more special. Having them recognize us … that really does mean something.”