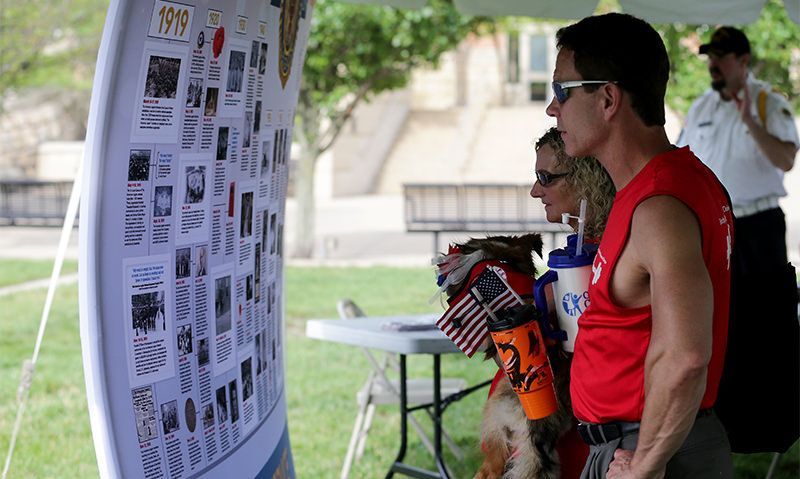 American Legion Post 194 in Mason, Ohio, has been a steady presence at the city’s annual Red, Rhythm and Boom Fourth of July celebration. The previous four years the post had the role of a vendor at the festival, one it continued this year.

But that was just a small part of Post 194’s involvement. After reaching out to city leaders, the post was able to take on a much larger role. This year’s festival on July 3 was an opportunity for the city to honor the Legion’s 100 years of service, as well as showcase all Post 194 does in the community.

A large tent in front of the Mason Municipal Center in the heart of the Community Center campus featured displays highlighting The American Legion’s 100-year history and its Four Pillars. The Legion also was honored on stage between musical acts, and Post 194’s color guard also presented Old Glory on stage prior to the singing of the national anthem.

“This is unprecedented. We’ve never had a fixed area like this to showcase anything veteran, really,” said Post 194 Executive Committee member Judy Pearson, who was doubling during the festival as the Ohio ambassador for The Women in Military Service for America Memorial at Arlington National Cemetery. “One of the (Legion’s Four Pillars) is to be an integral member of the community. This shows the community what all we do. It shows the many faces of The American Legion.”

Post 194 Commander David Charpentier approached city officials in January about the post possibly co-branding this year’s event to celebrate the Legion’s centennial. The city obliged, and Charpentier then started reaching out to other military and veteran entities in the community to bring in their involvement.

The partnership brought what Charpentier said was the largest veteran and military presence to the festival since the post became involved as a vendor. Representatives from the U.S. Army and Army Reserve recruiting had a tent near the Legion spot, as did the USO and the USS Cincinnati Commissioning Foundation. And the Warren County Veterans Service mobile office also was set up on Mason Montgomery Road, which lined the entire festival area.

“This was an opportunity for us to be reengaged with our community, take a leadership role in our community,” Charpentier said. “It was so that we can talk about why we matter in this community, why our Four Pillars matter, why we take care of one another, the things we do to promote Americanism. People don’t know. And this is a 20,000-, 25,000-person audience where we can spread our message. And this city has been nothing but supportive of us.”

Community involvement is a big part of Post 194’s mission. In addition to heading up the city’s Memorial Day parade, the post is hosting regular monthly fundraising breakfasts that include another local organization – which provides the post a chance to reach audiences with which it might nor normally reach.

“(The other organizations) get some money, we get exposure, we get opportunities to grow membership,” Charpentier said. “Plus, they’re like ‘I like this breakfast. I’m coming back.’”

Red, Rhythm and Boom gave Post 194 more of that exposure. For Past Post Commander John Looker, a three-time Purple Heart recipient and Vietnam War veteran, seeing the organization he’s been a part of for 35 years being honored “is very rewarding. (The Legion’s work) needs to get out to a lot of people."

But getting the message out wasn’t the only goal of the day. Growing the post was a goal, said Shawn Allen, a past post vice commander and current member of the post’s executive board. Allen has been a member of Post 194 for 21 years, joining at age 24.

The post expanding its involvement with Red, Rhythm and Boom “is going to mean a lot,” Allen said. “When we do things like this, we always get new membership. And that’s what this is about: for us to get new members, which means more people that might get involved to help the community. If you look at our Four Pillars – yes, we’re here to support our veterans and serve our veterans, first and foremost – to serve our community is right up there. And the last few years that’s really ramped up.”

Team Fastrax’s Dave Hart, a member of Post 194, was part of the demonstration and carried with him an American Legion Centennial banner as he landed. Carrying the banner “was a great honor,” Hart said. “I think the Legion does incredible things for the country and is full of patriotic Americans. One hundred years is a long time bringing service to the country.”

During the event, a video produced by the city of Mason honored The American Legion for its 100 years of service to the community. Various city leaders praised the Legion for having “made an impact on our history. They continue to make a difference in our future. These members strengthen the nation and our community.”

The video also thanked Post 194’s members “for their ongoing contribution to local veterans and the Mason community. Those … local heroes from our American Legion continue to give to so many worthy causes.”

Mason Mayor Victor Kidd made it a point to thank the veterans in attendance, saying “we understand our freedoms are contingent upon your sacrifice.”

Charpentier also got an opportunity to get on stage in front of the large concert crowd. Charpentier said that while some in the community know Post 194 through Memorial Day and other events, “we’re much more than that. Every day we’re out in the community taking care of veterans and their families, making sure that they get the care that they deserve. Making sure they’re taken care of financially. Connecting them with the resources that are available to them.

"And in The American Legion we’re about education – education for kids. We have a scholarship program for our posts. We send kids to Boys and Girls State, where they have an opportunity to be immersed in our form of government. For us, this is about being a member of the community and being part of the community."