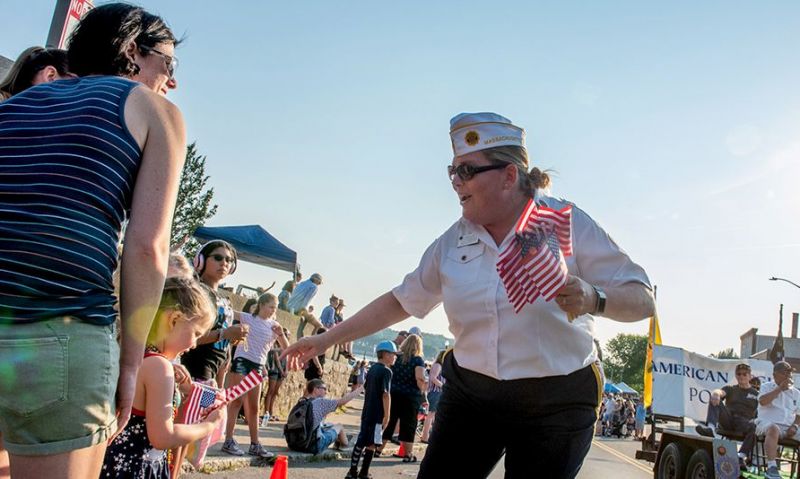 A special American Legion centennial float was among the first groups in the 77th Fishtown Horribles Parade, a large community celebration on July 3 in Gloucester, Mass.

“This is our 100th anniversary, so we thought we'd be a little special with this float,” said Mark Nestor, commander of Post 3 in Gloucester. “This was created specifically for the centennial and represents all the various armed services. It's a salute to them.”

Nestor was joined by Past Department Commander Mike Davis, Department of Massachusetts Vice Commander Sandra Kee and other American Legion Family members who marched or rode in the parade route as thousands of onlookers jammed the sidewalks and waved American flags.

“The Legion's featured pretty prominently in the parade, along with other veterans service organizations, because this is a very veteran-friendly community,” Kee said, noting Gloucester will celebrate the 400th anniversary of being settled in 2023. “We're front and center in pretty much this entire community. We're fortunate enough to live in Gloucester, where it’s always been a thing that this town has always really supported its veterans.”

Defining the “horrible” is really up to the individual. “As the name implies, anything goes,“ Kee said. “We don’t have any disclaimers. If you see something you don’t like, look away. Instead of on the Fourth of July, Gloucester holds its celebration on July 3. It winds through the city streets, getting more horrible as it goes along.”

In addition to the Legion, first responders and other typical parade marchers, there were a variety of groups and individuals entertaining the crowds. Among them: a truck decked out as “The Horror of the Fourth,” which looked like it belonged in a Halloween parade; a men’s anti-bullying group; a pair of lobsters encouraging people to say, “No to the pot,” and Uncle Sam holding a sign reading “Make Earth Great Again.”

Retired Air Force Lt. Col. Paul Krueger, a Gloucester native, is the post historian and chaplain. Krueger worked with Nestor on creating a book about the post’s history, which includes a long-standing presence in the parade. The 86-page book also details:

• Gloucester native Lester Wass, the post namesake and a Marine Corps officer who was killed in World War I.

• The first commander of Post 3, which was formed in June 1919, was A. Piatt Andrew, who started the American Field Service in World War I.

• A 24-foot-high Joan of Arc Monument statue (nicknamed Joanie on a Pony) that serves as a landmark for the post.

The Horribles Parade also has a long legacy. It started in the 1930s but was skipped during parts of World War II. Since 1960, the parade has been funded entirely by donations from local businesses and members of the community. While the city of Gloucester provides police, fire and emergency detail and support, the city does not fund the parade.

Krueger sees the parade as a way to raise awareness within the community.

“I think it's important to represent veterans in the parade, to bring up our visibility,” he said. “Because we have a lot of veterans who are hurting and the public needs to understand the sacrifices they made for their freedom.”

Nestor wants community members to know what Post 3 does every day of the year, not just the special celebration on the eve of Independence Day.

“I want them to be thinking about our fellow veterans,” he said of civilians. “And we want them to be thinking about how to take care of them, unlike how they took care of the Vietnam veterans, of which I was one. And we want them to remember that we're here for them and that we pay it forward, which is why we do things like the holiday meals for shut-ins and things like that. How we helped the Coast Guard during their last budget crisis. We made donations to them. We made donations to fellow Legionnaires in Houston during Hurricane Harvey. Our purpose really in life is to attract young veterans and to pay it forward with other veterans in this community so they can remember us and we can remember them.”