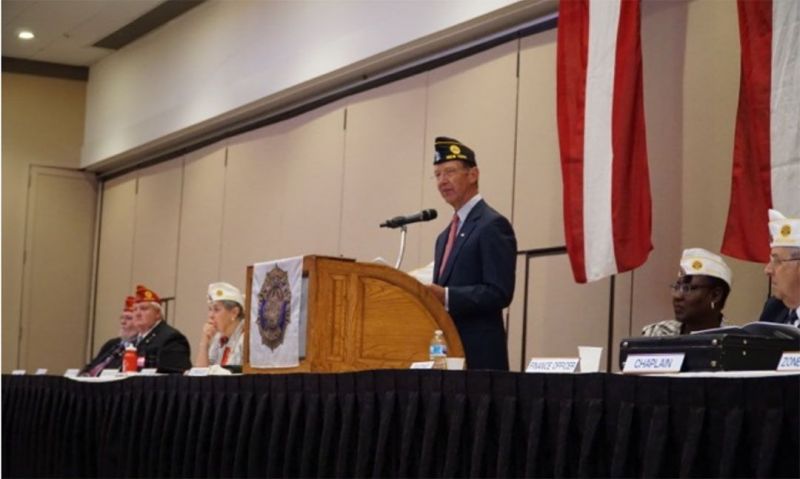 Roosevelt IV, whose grandfather Theodore Roosevelt Jr. was a prominent founder of The American Legion, said one of the most important values of the early organization was established to prevent the fate that would eventually befall Johnson, who was wounded 21 times and died just 10 years after the war’s end.

“I suspect that grandfather would not be surprised in the least at the endurance of this organization, founded as it is on a fundamental principle – that a veteran is a veteran,” Roosevelt IV told more than 300 who gathered in St. Louis for the Department of Missouri’s 101st Convention, a weekend-long centennial celebration. “Ted Jr. only saw the soldier, nothing else, because nothing else mattered. Not race, rank or duty station. Not social position, education, money or gender. The only things that mattered then and now were service, comradeship and loyalty. For grandfather and all the founders, this was clear.”

At a time long before desegregation in the U.S. military, Johnson and the Harlem Hellfighters (a unit of which was commanded by another American Legion founder, Hamilton Fish of New York) distinguished themselves on the battlefield. The regiment spent 191 days fighting on the front, including one instance when Johnson and another soldier were on watch in “no man’s land” when the Germans ambushed them. The other soldier was quickly wounded, and Johnson’s rifle jammed. So the South Carolina former train porter, used the butt of his weapon and a knife to kill four enemy attackers and is believed to have held off more than 30, securing his position and protecting his comrade. Johnson’s courage was immediately recognized with the Croix de Guerre avec Palme, France’s highest decoration for valor.

However, said Roosevelt IV: “Our nation failed him. William Johnson only received (the Medal of Honor and Purple Heart) after his death. Even worse, he was badly injured in battle, but the injury never made it into his military records. He had a plate in his foot and could no longer work as a porter as he had done before the war. He died unacknowledged and penniless. TR Jr. came home from World War I, one of the most brutal wars ever fought, and he could not place a period on his service, a period that could leave the returning soldier, such as William Johnson, without comfort and aid.

“He knew that their service demanded more of all of us. It demanded that we remember our veterans and their families with concrete action – concrete action that does not falter, that does not waiver, that is not subject to the whims of politics, that belongs to neither party and to no ambition other than to memory and duty. The American Legion’s founders believed that mission came ahead of party politics.”

The American Legion has continued to fight for fair benefits and treatment of veterans, regardless of race, gender or rank, throughout the last century. Roosevelt IV told of his grandfather’s encounter with Sgt. William Patterson, who was recovering from wounds at an Army hospital in France during the war. Patterson told Roosevelt Jr. that his plan after discharge was to “go home and start a veterans association for the good of the country.”

Sgt. Patterson did not survive the war, but Roosevelt Jr. and his comrades fulfilled his vision by starting The American Legion in 1919, which included the St. Louis Caucus of May 8-10 that year where the Preamble to The American Legion Constitution was written, committees established and filled from every state, and the organization’s priorities came into focus.

“They began with no paid members, no departments or staff, and virtually no money. But they had a purpose – to strengthen our nation after a horrific war. Their focus was entirely on their mission and on the welfare of returning veterans. There was no time or place for personal ambition or grandstanding.”

That initial principle, carried forward over the decades, led to massive American Legion accomplishments from rural communities to urban centers, including advancement of civil rights, democratization of higher education and home ownership, a better-prepared system of defense, healthy programs for young people and, foremost, support for veterans who came home facing readjustment difficulties after wartime service. “A healthy VA for the future must always be a priority for The American Legion, regardless what century it is. But most importantly, we give ourselves this – our association, our comradeship, our devotion to one another.”

All of these actions – from support for needy children to federal accountability for military exposure to Agent Orange in the Vietnam War – have built up what Roosevelt IV explained is “social capital” between veterans and their communities. “Social capital is an extraordinary glue that holds this country together. I believe firmly that The American Legion provides great glue in holding communities together. I believe the role of The American Legion, both in urban America and in rural America, (is) essential. The great French historian Alexis de Tocqueville remarked on the ability of Americans to create associations that get things done. That’s a tremendous aspect of The American Legion, and it’s so important.”

Roosevelt IV said it is vital that The American Legion reach out and engage the post-9/11 generation of veterans to join the organization’s second century. As veterans, he said, “We know the cost of a lack of discipline. We know what it takes to storm a hill or hold a bridge. We know what it takes to get it done. So we did, and so we will continue to do, because we must. We have The American Legion because of the World War I doughboys and doughgirls who came home from war and remembered … their comrades in arms so well that they have shielded, comforted and lifted up more generations than they ever knew. We are the children who most of those soldiers never met. I never met my grandfather. But we are their legacy. It is not just about those bonds to grandfathers, It is about the obligation we must feel to grandsons, even those who we may never meet. Together, we struggle to ensure that a William Henry Johnson will never again be abandoned. Today, we honor our mutual resolve, our comradeship, our loyalty.”