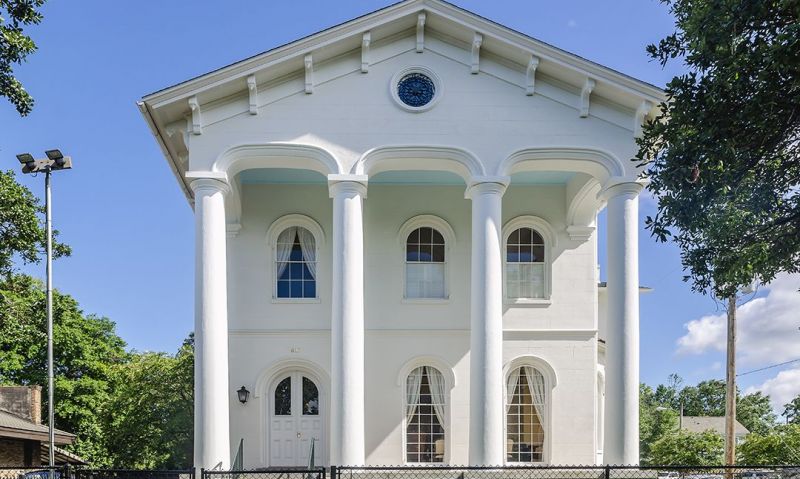 Just three years ago American Legion Post 3’s building in Mobile, Ala., faced being torn down.

The city had condemned the building. Transients had taken up residence inside. The basement was flooded. Animal carcasses littered the hallways. The roof had started crumbling.

“It would have been a good place to hold an astronomy class,” Post 3 Historian Wayne Sirmon said of the building, which was built in 1857.

The situation was bleak. The city wanted to demolish the building. The post didn’t have funding for the massive repairs. Membership was dwindling.

Now, the Kennedy House-American Legion building has a bright future after post members led by Hal Pierce worked with a Mobile historical association to save it. Essentially, the post handed over the building to the 1857 Foundation, a Mobile-based 501(c)(3) that was established for the purposes of historic preservation. The 1857 Association now owns the building but allows Post 3 to use it.

“It’s amazing,” Pierce said. “You can’t imagine the difference between then and now.”

The nearly 10,000-square-foot building with two floors and a full basement sits just outside of downtown Mobile.

The $2 million restoration project included installation of a new roof, removal of 11 large dumpsters of debris and trash, and a complete overhaul of the floors. Workers were able to keep some of the original tiles, which are now surrounded by wood flooring. It took nearly a year to complete the project, said James Alexander, president of the 1857 Foundation.

When Alexander first saw the building in its compromised state, he didn’t flinch. “My first impression when I first walked in was not one of dismay or despair,” he said. “My impression was, ‘Wow! Just imagine what we can do with this.’ It was a very positive perspective. But it was really all about harnessing all the resources to make it happen.”

That was in March 2015. By the end of 2018, the transformation was essentially completed. By March 2019 — the Legion’s 100th birthday — the post could once again hold meetings in the facility.

“This is one of the oldest residences in Mobile,” said Alexander, who is also president of the Mystics of Time, Mobile’s largest Mardi Gras group. “It would have been a horrendous loss if we had not been able to save the building. It started off as an effort for us to find a place for ourselves, and in the end, it wound up being an opportunity not only to save a landmark in Mobile, but an opportunity to find a home for our organization and to be able to allow the Legion to be able to resume meeting in their historical location. So it was a win for everybody.”

Most of the 650 members of the 70-year-old Mystics of Time were awed by their new home as they went about this year’s Mardi Gras celebration.

During a tour of the building, a combination of Greek revival with Italian influences, Alexander pointed out additional work that had been part of the renovations. Pocket doors were saved. Glass in 19 windows, measuring around 11 feet high, were replaced. A rooftop area that can host small events was modernized.

Alexander, whose father is a member of The American Legion, was honored to give back to local veterans. “I'm a very proud citizen and patriot,” he said. “I'm a very big supporter of the military and military causes. And so it was very natural for me to see, not only the need, but to want to try to help in some way.”

With its future solidified, Post 3 — a centennial post — is actively engaged in its community once again. Post members participated in Memorial Day activities in Mobile. At the community’s Patriotic Independence Day concert, the Mobile Symphonic Band played The American Legion March in honor of the post’s centennial. Looking ahead, Post 3 will have a float in the Veterans Day parade among other activities.

Membership has grown from 15 to 50 since the effort to save the building began. “We became somebody,” Pierce said. “That concert let the community know we’re back. I got a lot of great feedback.”

The Mystics of Time will use the building for meetings, parade preparations and more. “Their spirit and initiative in acquiring this building was a terrific thrill,” Pierce said. “A major historic site on their downtown parade route — this is a terrific site to meet at and watch the parade from.”

The building was once a house for Mobile native Joshua Kennedy Jr., a Confederate soldier during the Civil War. Post 3 bought the building and used it as its home from 1947 until the 1990s when it fell into disrepair.

It had been decades since post members used the building for meetings or anything else. Among the first official meetings since its reconstruction was a 33rd District meeting held on July 21.

District Commander James Daniels beamed as he talked about the success story in his hometown.

“The resurgence of Post 3 means a lot,” said Daniels, a member of Post 76 in Mobile. “It’s a historical building. It had been in disrepair for a long time. I know the members are very proud of this building and their accomplishments. Post 3 is one of the pillars of this district. The post can serve its community once again and that’s a great thing.”

Even though Daniels is a native of Mobile, he never knew the building’s history as a youth. “Even when I came back in the 90s and joined The American Legion, I had no idea what was inside this building. I knew it was a historical building but I was unware of what it stood for.”

Daniels credited Post 3 members with not only saving the historic building but ensuring that the centennial post would march into its second century.

“For me, as district commander, to see the revitalization of Post 3 and its home, it says a lot for the membership to staying steady and believing in what they could,” he said. “A lot of posts would have folded under the circumstances. It’s been a long journey but you can tell by the enthusiasm from the members that they are grateful to have this home.”

“We’re excited about the centennial,” Pierce said, noting this was the first time Post 3 has hosted a district meeting in at least 25 years. “We’re doing things with the district. We’re getting involved. Today is a landmark day for us.”