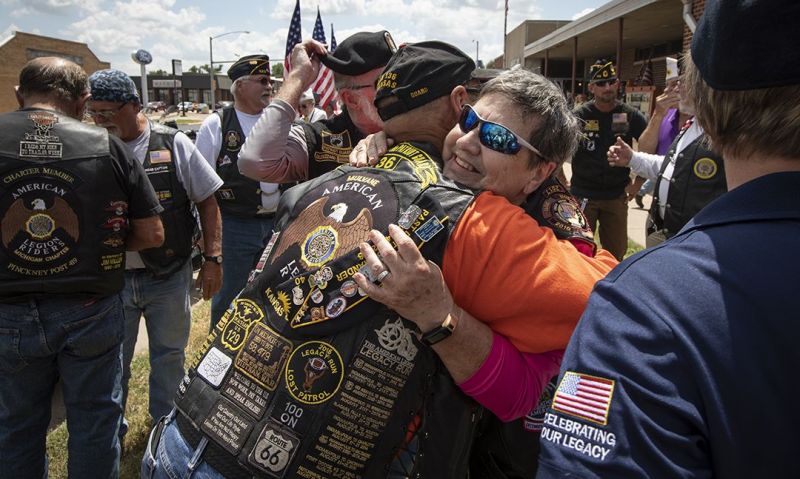 Waking up in Alva, Okla., this morning I got to take some time to drink my coffee. Seeing how Team Vision has just a little over 100 miles until we meet up with our Northern counterparts, Team Legacy, we started a bit later in the day.

A small group that were continuing on to the end met in our hotel parking lot and prepared to ride. The commander of Alva Post 92, Scotty Cox, who is also the director of his American Legion Riders chapter, led our group to the border with his son, 12-year-old Joseph Cox.

We arrived at the border to be greeted by the Southern Kansas contingent. There were handshakes and hugs all around, then we had the official handoff of the Centennial Ride banner. It was just a short ride up the road until we got to Post 175 in Hardtner. This post actually had the American Legion Highway sign proudly displayed out in front of their post.

As we were pulling in the town of Medicine Lodge, Kan., I spotted a small group of riders waiting for us on the side of the road. As we approached they pulled out in front and escorted us to the post. One cool thing about them were the large American flags they had mounted to their bikes that flapped in the wind. It seemed like the closer we got to Great Bend the larger the crowds were, and there was a great crowd in Medicine Lodge.

Believe or not I’ve been through Southern Kansas just about every year for the past 15. I regularly work on a bicycle race called The Race Across America, or RAAM. And this race goes directly through Pratt. Just a month ago I passed through in the middle of the night while crewing for the top American ultra-cyclist, Dave Haase. I remember wondering as we crossed over Highway 281 what it would be like when I would return here a month later. Today when we rode through I thought to myself this is one of the few times in my life when reality exceeded expectations.

When we pulled into the Tiger Stop Gas and Grocery in St. John, I thought we were just stopping for fuel and some lunch, but I was wrong. We were there to visit the distinguished members of Post 53. Toward the back of the grocery store was a small conference room with three of the four members of the post; Commander Ronny Prescott, Adjutant Mark Norton, and Service Officer Terry Welch. The three gentlemen stood wide-eyed in their work clothes as riders and Legionnaires from around the country, including state and national officers, crowded into the small room to honor their post and present them with a certificate to acknowledge their location along the American Legion Highway. I applaud these veterans for maintaining their connection and keeping Post 53 alive for future generations.

We made it! After a quick departure from St. John we had just over 20 miles to go. Like many times before, our escort joined us right out of town to lead us in. And as we rode up a long line a flags with Legionnaires, Riders, Auxiliary, and Sons stood out in front of Great Bend Post 180 there to great us. We had arrived, and our counterparts, Team Legacy, came in a few minutes later. There were hugs and handshakes all around as old friends reunited. I spotted my counterpart Michael Hjelmstad and gave my buddy from Hollywood a fist bump as I said, “we made it buddy.”

Once inside it was time to join the Team Legacy and Team Vision banners. Past National Commander Dave Rehbein presided over the ceremony as groups from the two teams unrolled the banners and attached them together. And with that, our mission was complete.