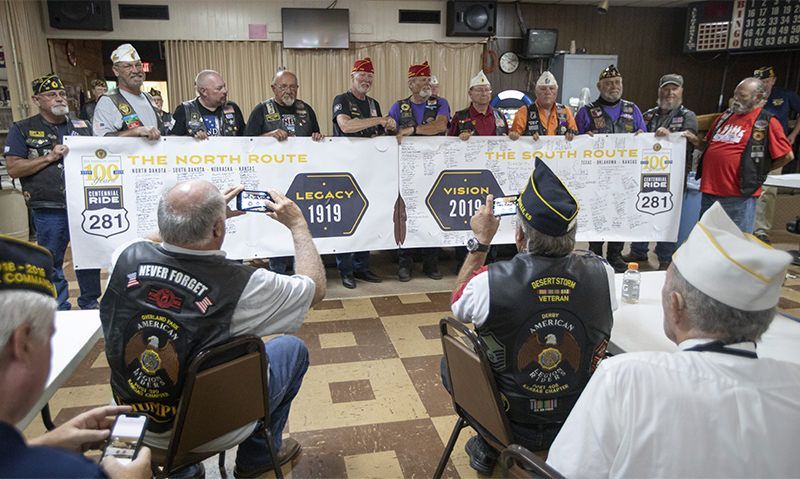 As Legionnaires before them did in March 1960, teams of wartime veterans converged Sunday in Great Bend, Kan., to recognize the American Legion Memorial Highway.

There, Team Vision joined Team Legacy to connect two halves of an American Legion Centennial banner they had carried with them on a two-leg, 1,875-mile motorcycle ride that included stops at more than 60 local posts through the heart of America.

The Centennial Ride, sponsored by the six American Legion departments through which the highway flows brought the Legion message to communities large and small, rural and urban. A car caravan of Legionnaires conducted a similar trip 59 years ago when the U.S. 281 was named to honor the organization.

Thousands followed the July 31-Aug. 4 journey online and through social media. Local newspapers, radio stations and television affiliates came to cover the various stops and the ride. Community members gathered along the streets of cities and towns to greet the Legion Riders. And local officials brought proclamations of appreciation to the riders and presented them at the post gatherings.

“This is where the heart and soul of The American Legion reside,” Past National Commander and 100th Anniversary Observance Committee Chairman David K. Rehbein said. “Community, state and nation.”

“I can think of no better way to usher in our second century, which brings the Legion’s centennial message to communities in the center of our nation,” said Rehbein, who joined the Team Legacy group from the second day through completion. “The message was clear along the American Legion Memorial Highway that our organization is riding into a great and bright future, driven forward by a 100-year legacy of accomplishments.”

See photos and the video ride-along from the event here.