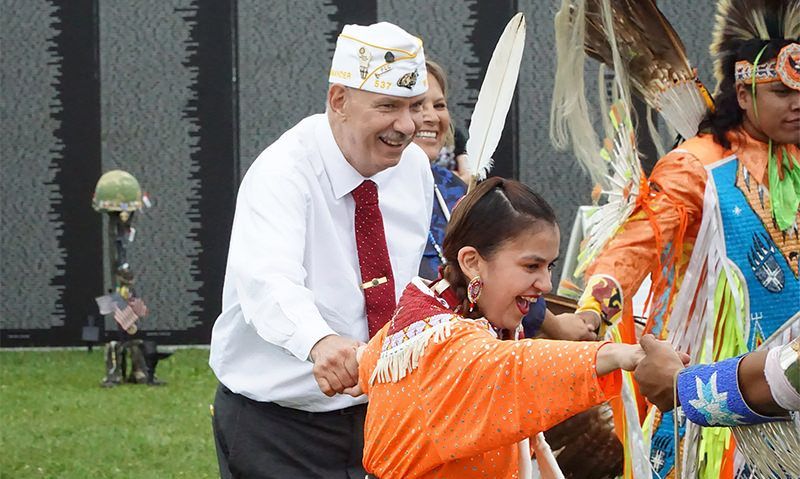 Ralph Snake moved from panel to panel, stopping at each to salute the inscribed names of those who could not be in Portage, Wis., last weekend because they did not come home alive from the Vietnam War.

“It’s a legacy – a sad legacy, but it’s a legacy,” the Andrew Blackhawk American Legion Post 129 chaplain told hundreds who gathered last Thursday for the opening ceremony of a Celebration of Freedom by The American Legion Foundation of Wisconsin Sept. 4-8 at the Columbia County Fairgrounds in Portage. “We’re here because of veterans, like these gentlemen on the wall.”

The 360-foot American Veterans Traveling Tribute Vietnam Wall, which displays the names of 58,282 U.S. troops who died during the war, is a mobile replica of the Vietnam War Memorial Wall in Washington, D.C. (The American Legion was the largest financial contributor to the memorial on the National Mall, dedicated in 1982.)

The Celebration of Freedom featured a pavilion filled with American Legion exhibits and booths, including the 100th Anniversary Observance Committee’s 160-foot traveling chronology tracing the organization’s first century and “The Greatest Legislation: An American Legion Salute to the GI Bill,” which has been traveling the country for more than two years.

Native American veterans from three area posts opened the celebration Thursday. Drums, traditional dancing and a sage-smoke blessing of the wall by Ho-Chunk Nation President Marlon WhiteEagle and Kirk DeCora, a Ho-Chunk member and veteran whose brother’s name is on the wall. Elliott DeCora, Kirk DeCora’s brother, lost his life at age 20 on Aug. 16, 1968, during a firefight in Quang Tri.

Snake said after his salute of all panels that although he knows a fellow Ho-Chunk is immortalized on the memorial, every name matters equally. “I was thanking them for their service,” he said. “They are all the same. They are on the wall. They all deserve respect.”

More than 600 high school and junior high students from the region toured the wall on Friday, guided by members of the local Vietnam Veterans of America chapter, as they looked for ancestors and rubbed their names onto paper with pencils. Veterans from area long-term care facilities also came in shuttle buses to see the traveling memorial.

“It’s a real touching time and a good way to recognize our warriors and the sacrifices they have made for the freedoms we get every day,” WhiteEagle told the crowd at the opening ceremony.

WhiteEagle told the gathering that the traveling memorial was no place for politics, and American Legion Department of Wisconsin Commander David Wischer agreed. “This is not about politicians and the way this world is working now,” he said. “It is about the sacrifices of those whose names are listed on that wall.”

Wischer invited attendees to take in the Legion centennial exhibits and learn about the organization’s programs, services and history, inside the pavilion at the Columbia County Fairgrounds. “We are still serving our country, in our communities,” he told the crowd.

Exhibitor tents and booths filled the fairgrounds. Membership recruiters met with veterans newly eligible due to the recent passage of the LEGION Act, and visitors learned about such Wisconsin programs as Badger Boys State and Camp American Legion.

The celebration wrapped up Sunday with a POW/MIA ceremony at the wall, followed by a POW/MIA Silent March, led by the American Legion Department of Wisconsin’s 2nd District.

Actively involved in the planning and execution of the event were local first responders as well as other veterans groups in the Portage community. “I am absolutely blown away, not only by the significance of what we have done here, obviously with the wall being here and those we are honoring who can’t be here today, but the pure significance of the community support,” American Legion Department of Wisconsin Adjutant Amber Nikolai said. “We had the fire department, the sheriff’s department, the police department, and we had over 50 riders – not just Legion Riders, but other organizations that joined in. We had school groups that were let out early and lined the streets.” Nikolai said she was awestruck to see children waving flags and motorists pulling over, taking off their hats and putting their hands on their hearts, as the wall exhibit was escorted by a motorcycle convoy to the fairgrounds.

The American Legion of Wisconsin Foundation was the sponsoring body of the celebration. “The city came together as a whole to work this event and make everything happen,” said Foundation President Jim Reigel, a past Department of Wisconsin commander. “It’s a real success. And it’s a testament not only to everyone who came. Each one who came will impact four or five additional people.”

Nikolai said she was delighted by coverage of the area NBC affiliate, Channel 15, which aired multiple live segments from the fairgrounds over the weekend. “They covered the significance of the wall being here and also the history of The American Legion and some of the prominent Legionnaires from Wisconsin,” she said.

“The display here with the 100 years of The American Legion – people did not know or did not realize the impact the Legion has had throughout the country and in our communities,” Reigel explained.

“What I loved the most is we captured every age group, from little 3-year-olds kicking the kickball all the way up to a lady at the wall who was 98 years old,” Nikolai said. “We brought generations out here through the weekend.”

In Saturday’s concert by the Memories – primarily a ‘50s, ‘60s and ‘70s music and comedy duo – one song they played by the Statler Brothers was a little more serious and little more recent: “More Than a Name on a Wall.” The 1989 release, about a mother’s grief for a son whose name is etched on the Vietnam War Memorial “left everyone in the hall in tears,” Nikolai said.

In their second concert that afternoon, the Memories played again, but not before recognizing Jim Chapin, a combat-decorated Vietnam War veteran and American Legion past department commander, who not only came up with the idea to bring the wall to Portage but provided funds for its appearance.

Said Nikolai of Chapin’s gesture: “He said, ‘I want to sponsor the wall. I will pay for it. I will get it here.’ Everything was built around that. It was one dedicated Legionnaire, a decorated Vietnam veteran who was the catalyst who really made this come together. It was his heart. It was his idea, that everything was framed around the wall.”

A second annual Celebration of Freedom, she said, is already in the works.