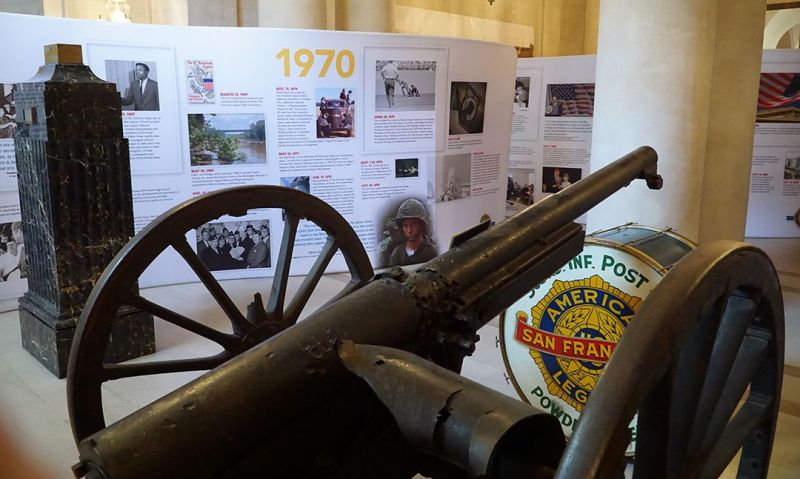 The American Legion’s first century is on display through Dec. 20 inside one of the organization’s most historic local venues, the War Memorial Veterans Building in San Francisco.

Lum, vice chair of the American Legion War Memorial Commission, said it’s important to show the city the role the organization has played, and continues to play, in U.S. society. The Legion’s place in the 1932-dedicated structure faced a court challenge four years ago after the city completed a $250 million retrofit/renovation of the War Memorial Complex’s historic structure, the Veterans Building and adjacent War Memorial Opera House which was renovated 10 years earlier. As named beneficiary of the original trust that governs the operation of the complex, The American Legion won its case to continue accommodating groups that support and provide services to veterans and offering programs to showcase the area’s military history and culture. The city’s court challenge, Lum said, was a strong reminder to not take for granted the opportunity The American Legion has with the building. “We’re not doing a dance in the end zone,” he said. “We are cooperating with the city. It’s important to work at it and show that we belong here.”

The city owns and maintains the properties on the complex, which includes a 2014-dedicated memorial monument and reflecting pool containing soil from U.S. military battlefields around the world.

Lum said the American Legion’s veterans gallery had become little more than a storage unit for military artifacts until the big renovation. “There was no theme or anything,” he said. “At one point, we had over 100 rifles that were just tossed in there. About four or five years ago, it was recognized that we couldn’t leave it the way it was.” He said the American Legion War Memorial Commission made a concerted effort at that time, as its status inside the building was being tested, to transform the gallery into a carefully curated museum space.

To learn more about the American Legion War Memorial Commission and Veterans Building, visit https://alwmcsf.org/ on the web.