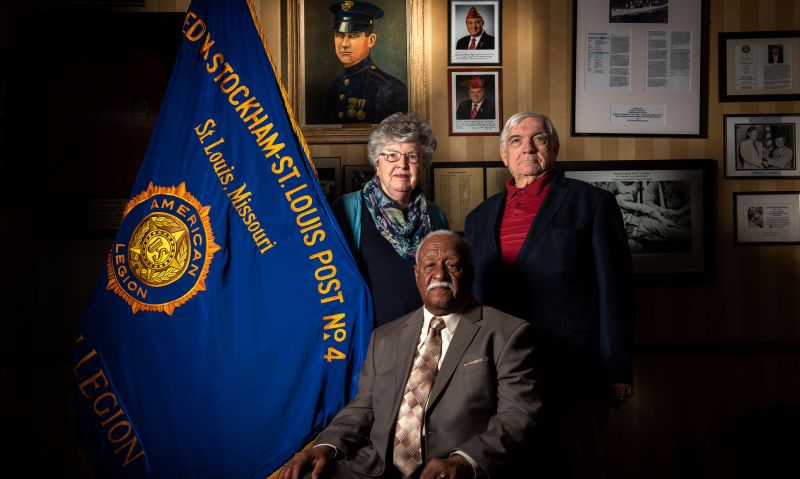 On May 9-10, several events were held in downtown St. Louis to mark the 100th anniversary of The American Legion’s foundational St. Louis Caucus. Among those was a luncheon at the Missouri Athletic Club (MAC), whose downtown location had hosted meetings both during and even before the caucus – the latter at the agreed invitation of chapters of the Grand Army of the Republic and the Sons of the Confederacy, both of whom met at the club.

Giving tours of the Veteran’s Room on the fourth floor were members of Fred W. Stockham-St. Louis American Legion Post 4. In fact, according to past post adjutant/commander Judith Hanses, Post 4 put in a lot of work helping the Department of Missouri pull off the caucus anniversary. The post started meeting at the MAC in 1976, the same year that St. Louis Post 4 combined with Fred W. Stockham Post 245. Both were chartered in 1919, and according to post adjutant/program chair and past post commander Ray Bueneman, both had a number of downtown businessmen and MAC members among their own memberships – the movers and shakers, as it were, in what were known as “silk stock’ums posts.”

Post 245 founder – and prominent local attorney – Barak Mattingly had it named after fellow Marine Stockham, who had saved Mattingly’s life in France during World War I by giving him his gas mask; he died of his own exposure a few days later. The process of getting Stockham a posthumous Medal of Honor took several years, and when it was issued the post was actually the custodian of it for a time (no relatives of Stockham’s could be located). Today it is not far away, at the St. Louis Soldiers Memorial, on permanent loan as long as it remains on display. A portrait of Stockham owned by Soldiers Memorial hangs in the Veteran’s Room under the same terms.

Bueneman’s American Legion history began with Post 245, as a member of the 1956 national-champion Legion Baseball team. He describes the reception upon their arrival at the St. Louis airport as “unbelievable,” with 5,000 in attendance, a 100-plus drum and bugle corps from another area post, and being honored by the St. Louis Cardinals. In fact, owner August Busch Jr. had jackets made for the team, in lieu of sending them to the MLB World Series (since the Legion already did that). Bueneman, who remembers playing – and beating – Post 4, joined The American Legion around 1980 in Georgia after serving in the Air Force, then a suburban-St. Louis post when he moved to Missouri. In 2006, the MAC hosted a 50th-anniversary team reunion, and Bueneman (who was the only Legionnaire on the team) was talked into transferring.

Hanses’ first encounter with the Legion was while she was serving as president of the Association of the U.S. Army. After she returned from deployment during Operation Desert Storm, she was asked to speak at the post’s weekly lunch meeting at the MAC and was approached for membership that day. “I felt good about how I was received,” says Hanses, who is also an MAC member.

Post 4 keeps busy with programs, especially those relating to youth. Post commander Thomas J. Williams Sr. first encountered these during his teaching career across the Mississippi River in Illinois, through ROTC and Boys/Girls State. Citing his “good relationship,” the Air Force veteran joined the post when he retired about five years ago. But he had also played Legion Baseball as a youth in Phenix City, Ala., where his father was a post commander.

The Veteran’s Room is also home to the MAC Military History Club, and is full of memorabilia from both Post 4 and the club, among them the MAC Honor Roll of members’ military service; wartime issues of the club publication The Cherry Diamond; Post 245’s Legion Baseball championship trophy; a “Last Man Standing” tontine bottle long entrusted to a local law firm; and panoramic photographs from the St. Louis Caucus donated to the post by a member who came across them in Arizona.

The MAC is a good host, and values the relationship. “The Missouri Athletic Club and The American Legion have been intertwined through our shared members for more than a century,” said MAC General Manager/CEO Wally Smith. “Many of our members have served in the military with distinction and the club has been an important gathering place for The American Legion going back to its inception, so it is a natural partnership. We are honored that Post 4 calls us home and continues to meet regularly in our Veteran’s Room.”

“They love having us here … they wish there were more of us,” Bueneman adds. About half of the members of Post 4, like Hanses, are also members of the MAC. But for all the benefits, the location does present something in the way of complications for the post. Given that it’s downtown – close to jobs, but not to home for those who “live out” – it has never had Auxiliary or Sons components. And the MAC’s dress code, which extends to visiting Legionnaires, put some off; those who are comfortable there are those who are comfortable and effective while wearing a suit and tie.

Post 4 held its 100th anniversary dinner in June, an opportunity for reflection. Williams says the opening of membership with the LEGION Act is under discussion as a possibility to draw in new Legionnaires from within the club; the post’s new membership chairman is a past MAC president. Williams thinks one problem, not exclusive to Post 4, is a lack of self-promotion: “Most American Legions are too modest for me,” he comments, “because they’re not in it for that.”

But as with American Legion posts anywhere, many of those who start to get involved soon find themselves drawn in. “The camaraderie of veterans who have served our nation” is what keeps Hanses working so hard, and “the history of the post has made me even more committed.”