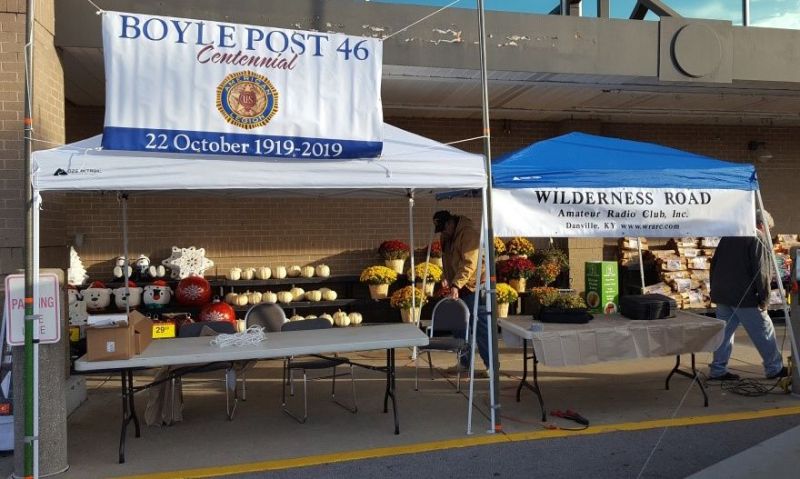 To publicize the centennial, Post 46 went where the action was - a local supermarket. (Photo via Tony Cromwell)

A success summary of our centennial encompasses the resulting public images of the Legion, post, radio club (WRARC) activity, and membership recruitment success. Significant advance planning went into utilizing WRARC as a centerpiece of public activity and enhancing the image of the Legion and post. A joint set of booths were set up to host the post and WRARC in front of our local Kroger supermarket, which features high traffic levels of local shoppers, on Oct. 19 from 0900 to 1600L.

We chose the local radio station (KHIR) to air an advertisement, and the local newspaper (Danville Advocate-Messenger) to announce the centennial via a news release. A 30-second radio ad was drafted announcing the historic roots of the event, post community charity work, a discount membership promotion, a special invite to the lady Legionnaires, and our post web address. The station professionally dressed up the message for air, and we paid for 50 30-second ads. While refreshing the Legion and post public image in a very positive way, we were unable to discern anyone responding as a result of the ad.

A news release to the newspaper immediately resulted in a call from the newspaper offering to do a full article on the event. They were very excited to learn of this historic event. A resulting article was published two days running. The article stressed our public activities and outreach to the community, which was specifically responded to by a veteran on Saturday expressing gratitude in learning of the shift in a historical paradigm. A second prospect offered similar sentiments. Both went away with Legion and post info and agreed to check out our post web site, which will likely convince them to join. The newspaper researched their archives and sent along all the articles they found. One was of the Freedom Tree planted at the local high school by Post 46 on our 50th anniversary. We are looking at re-inscribing the eroded memorial.

The post booth featured Legion materials on its history, benefits and flag etiquette. Inscribed pens from the Emblem store and Legion drink holders were given away. A typed list of the 15 WW1 Boyle County veterans who established the post drew significant interest from the visiting public. Our promotional discount of 50 percent was well received. While our discount program continues until the end of the month, we’ve processed some seven new members and four transfers. Notably, we acquired a retired AF lieutenant general and a lady veteran (a target of our efforts). The activity of WRARC attracted attention, and two of those additional members resulted from that activity. We featured Vice Commander Regena Carney in our booth. She works with five local school systems to recruit for Boys/Girls State and Oratorical program candidates (a high post priority).

Amazingly, this group turned around after managing the KY Bourbon Chase featuring some 450 runners the night before. In the early morning hours, they already worked all the European countries.

Currently, WRARC has made over 800 contacts. These contacts involve 46 states, some 22 countries, on 160, 80, 40, 20 HF bands utilizing CW, phone and FT8 modes of transmission. The post is awarding a “Most Contacts” award which is stimulating high activity. The club received a special pen set for their console inscribed with the W4L special event from the post.

On Oct. 22, the post celebrated its actual birthday with a cake and ice cream social. We enjoyed the presence of some 40 members. WRARC operated their radio station all day and held their monthly meeting in the hall after the social.

The overall celebration activity clearly raised the pride and cohesiveness of our post. The public image of the Legion and post was polished very nicely. The post and Legion gained valuable memberships. On Oct. 23, the ARRL assistant section manager and his wife visited our post and presented an award to both the post and WRARC as a result of the CQ magazine article [in the October issue, out now, on the partnership between Post 46 and a local ham club] and our W4L special event.

Finally, our centennial banner resides below our entrance sign to proclaim our celebration to all the neighbors, passersby and as a post membership reminder.