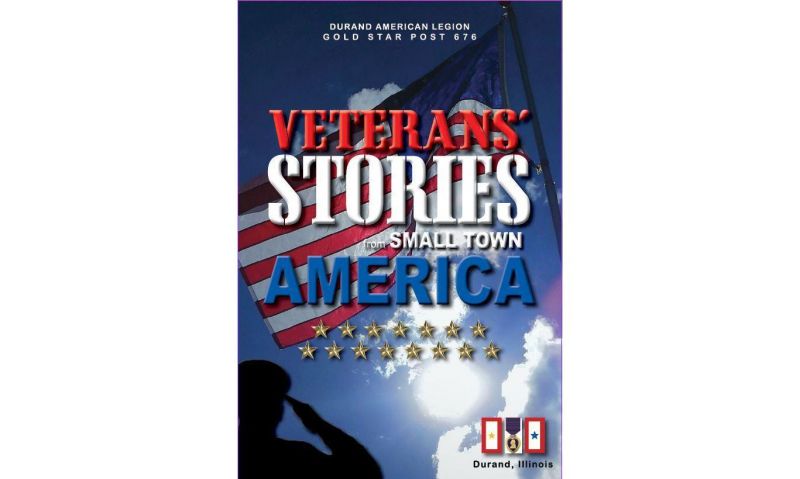 American Legion Gold Star Post 676 in Durand, Ill., will turn 100 in 2021. To celebrate its centennial, Legion Family members created a nearly 250-page hardcover keepsake book about its history along with the military service stories of 500 veterans from the surrounding area.

“Veteran’s Stories from Small Town America” was a two and a half year project that was completed and released last November for $25 a copy.

Post 676 Legion Family members are “very proud of the finished product and feel honored to have undertaken this labor of love."

The idea for the centennial book originated from past Post Commander George Faggerstrom, who wanted to collect stories from veterans. Post members took his idea and made it happen through volunteer efforts from Post 676 Commander Duane Stephen, Post Adjutant George Letcher, Auxiliary Unit 676 Historian Sherry Meinert, and other Legion Family members, members of the local Otter Creek Historical Society and local residents.

A questionnaire was created that asked for the veteran's name, branch of service, rank, date served, enlisted/drafted, unit/duty station location, awards, special training, and an interesting or humorous story, most vivid details from service, an important event, or what they did when they returned home from service.

This questionnaire was shared through social media, word of mouth, Legion Family newsletters, in the Durand newspaper, Volunteer, and in the Durand State Bank newsletter and on its electronic sign. Between these efforts, responses started coming in through snail mail and email to the post from veterans and their family members.

The personal stories in the book date back to veterans of the Civil War to current ones who have a connection to the Durand area. Being a member of The American Legion wasn’t a requirement. Gathering information on local Civil War, Spanish-American War and World War I veterans resulted in Meinert searching through old newspaper stories and using online resources such as genealogybank.com.

The one veteran the post wished they had military service details on is Doc Young, the founder of Post 676 and its first commander. Meinert shared that in the book it highlights that he was Durand’s first fire chief, a dentist and on the draft board.

The pages of “Veteran’s Stories from Small Town America” not only hold the stories of servicemembers and history of Post 676, but also pages of dedication to those killed in action or from the flu during World War I; charter members and commanders; the long history of service that the post, Auxiliary unit and Sons of The American Legion squadron has to its community; memorials and monuments dedicated to veterans and historical events that helped define the the post's history; local priest, former post member and American Legion National Chaplain for 1924-1925 Fr. Joseph Lonergan; a tributes section where loved ones can be remembered; and appreciation to businesses that helped sponsor the book.

Legion Family volunteers typed the stories and details of the book on a computer and sent everything to a local graphic artist for formatting prior to publication.

"I am most proud of the team effort required to build and publish a book like this," Stephen said. "Our goals were to create an affordable, keepsake quality volume which told the story of our post's first century. As the reaction to our efforts has shown, we met those goals entirely. Those who have seen and purchased it are genuinely surprised and pleased by the depth of historical information and quality of our efforts."

A copy of “Veteran’s Stories from Small Town America” can be obtained by sending an email to durandpost676@gmail.com.