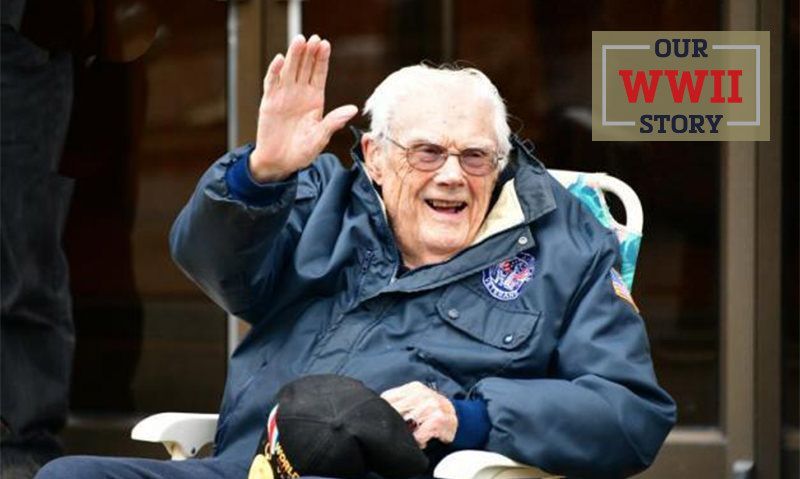 The COVID-19 pandemic changed the way The American Legion intended to celebrate the 75th anniversary of World War II’s end. Public events largely had to be put aside as communities restricted group gatherings. Local posts, however, found other ways to honor the “greatest generation” from safe distances throughout the year. Notably, in many communities nationwide, The American Legion has helped the veterans celebrate birthdays – often 100th birthdays – in ways that might not have drawn so much fanfare if they had been indoors in any other year.

“The day arrived, and questions were asked,” Blue Ash, Ohio, Northeast Post 630 Publicity Coordinator David Buschmann wrote on The American Legion Legion’s Legiontown website. “Will the weather cooperate? They were calling for snow and cold. Who and how many will come? We had no idea, but a dozen vehicles would be nice. Would the TV folks show up? They all had been told about it. Would there be any last-minute problems that would put the kibosh on the whole thing? There was no way of knowing. So how did Dean Giacometti’s drive-by birthday parade turn out?”

The snow held off. The media came. More than 40 vehicles rolled in, decorated and full of well-wishers, for the U.S. Army Air Corps World War II veteran from the Cincinnati area who celebrated his 101st birthday from a lawn chair in his driveway in late January. U.S. Rep. Brad Wenstrup, R-Ohio, a colonel in the U.S. Army Reserves and an Iraq War veteran, was among dozens who joined in the drive-by celebration.

“Dean was less than 20 feet away from the procession passing by before him,” Buschmann reported. “He saw banners, balloons, signs and flashing lights. Some vehicles stopped and wished him happy birthday; a Blue Ash police officer got out of his car and saluted Dean; many participants were waving signs as well as their hands. Dean took it all in with the biggest of smiles. He was thoroughly enjoying himself and pleased with everything he was seeing. It was a great event for a great man!”

This was no isolated event.

In Salida, Colo., American Legion Post 64 World War II veteran member and Pearl Harbor survivor George Blake didn’t get to celebrate his 100th birthday the way he thought he would on Jan. 29. Instead, a masked and socially distanced “People’s Band,” complete with a bagpiper and Scottish storyteller, showed up outside Blake’s sunroom, Ray Lines Post 64 Commander Joe C. Beakey reported on the legiontown site. A huge HAPPY BIRTHDAY sign was strung outside near a tree where a bag was filled with cards from friends. The World War II veteran, Beakey explained, enters his second century still serving the community, having recently helped raise $10,000 in funds to assist individuals, families and non-profit groups during the pandemic.

On March 27, World War II U.S. Coast Guard veteran Marion E. Lehman of Swanton, Ohio, sat with his family outside his home for a drive-by 100th birthday tribute organized by American Legion Post 479. The veteran joked with reporters at the event that he didn’t realize he had so many friends left.

A January Buddy Check by American Legion Post 24 in Alexandria, Va., turned into a safe birthday surprise for 73-year member H. Warden Foley, a World War II Seabee in the Pacific Theater. Post members prepared cards and gifts including a quilt from Quilts of Valor as part of a Buddy Check on the former Post 24 commander.

Members of Olean, N.Y., Charles Harbel Post 892 American Legion Family helped make the 100th birthday of World War II D-Day veteran George Schrieber Jr. special with a socially distanced celebration at The Pines of Olean nursing home in October. There, the veteran was presented with a certificate from Olean Mayor William Aiello while Post 892 provided an Order of Arms and formal salute from a safe distance. Prior to the celebration, Auxiliary Unit 892 Veterans & Rehabilitation Chairman Jo Lippert had set up a box at the post that asked members and their families to provide 100 birthday cards for Schreiber so he would have them to represent his years of life.

In September, Mason-Dixon Post 194 in Rising Sun, Md., joined a parade of first responders, classic cars and other vehicles in a 100th birthday party for World War II Army veteran Joseph Wiggins, who fought from Normandy through the Battle of the Bulge in the final push to victory in Europe. “I’ll never forget this,” Wiggins said after standing at attention when The American Legion vehicle carrying the U.S. flag passed. “I was never celebrated like this before.”

The Legion Riders of Lysle Rishel Post 68 in Hutchinson, Kan., helped World War II Army Air Forces veteran John C. “Jack” Lamb celebrate his 100th birthday by riding in a parade of more than 100 vehicles in July and stopping to salute him.

Maryland Legionnaires certainly did not want Gerald Greenfield’s 100th birthday to pass without their respects, so they presented him a pin and played “The Army Song” outside his home while his friends and family members drove by, in honor of the World War II, Korean War and Vietnam War veteran. North Carolina Legionnaires, meanwhile, paraded before the home of World War II veteran Alex Moskowitz in May for his 97th birthday, and World War II veteran Frank Filous had more than 100 friends show up in the parking lot of American Legion Post 703 in Parma, Ohio, for a socially distanced surprise 99th birthday party. In White Township, Pa., World War II Navy veteran John Palys received a 100th birthday drive-by parade led by Carl B. Archer Post 528 of Belvidere, N.J., and two U.S. Army vehicles, plus dozens of emergency vehicles, fire trucks and private cars.

Share your story of celebration for the World War II generation by visiting the Legiontown site and adding to the MY WWII STORY category.

To learn more about the ways in which The American Legion has confronted the COVID-19 pandemic in communities across the country and beyond, order “COVID Operations: The American Legion Family’s Response to the Global Pandemic” through Emblem Sales.