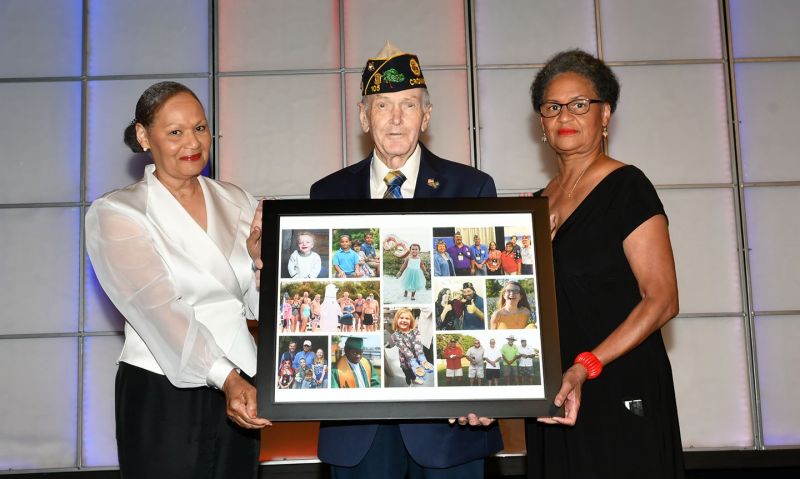 For 30 years, the American Legion Family has supported the Children’s Organ Transplant Association (COTA) through grants, fundraising efforts and donations that have totaled more than $1.5 million. These funds have ensured that the mission of COTA is met, which is to provide financial assistance to families across the country whose child or young adult needs a life-saving organ, bone marrow or stem cell transplant.

“We honor and thank the American Legion Family for their service not only to our country, but also to COTA families,” said Rick Lofgren, COTA president and CEO, before presenting the award. “We are grateful for these men and women who so selflessly continue to give to help others.”

Lofgren presented the award to Americanism Chairman Richard Anderson from Connecticut, who accepted the award from Taliaferro’s two daughters on behalf of the American Legion Family. Prior to accepting the award, a video of how and why the Legion Family supports COTA was played.

“The American Legion Family has been there to support COTA and their families so that no child is ever denied a lifesaving transplant due to financial hardship, and so no family must endure the challenge alone,” Anderson said in his acceptance remarks. As a nonprofit serving the mental, physical, emotional and spiritual well-being of children, in its 35-year existence COTA has been a 12-time American Legion Child Welfare Foundation grant recipient, totaling more than $380,000.

“We take comfort and pride that the assistance provided by our Legion Family has helped give so many children a chance at a more normal childhood and their parents the ability to hope for a brighter future for their child,” Anderson said. “The lives of these children and their families, as well as our Legion Family members, have forever been changed by the work that COTA does.”

Legion Family members from the Departments of Florida, Indiana and New Jersey were also in attendance for the award presentation, as Lofgren said those departments are among the top supporters of COTA.

Immediate Past Department of Florida Commander Rick Johnson made COTA one of his fundraising projects and raised over $153,000 for the organization; he raised $40,000 alone by shaving his head. Johnson said people donate and get involved when there’s passion behind the cause and they’re having fun. He presented a final check to Lofgren Saturday evening for $88,000.

Over the past several years, the Department of Florida has raised over a half million for COTA, said Art Schwabe, the department Alternate National Executive Committeeman who has been involved with COTA since 2010 and was in attendance Saturday evening. COTA “is a great organization that does great work, and we have a great relationship with them,” Schwabe said. “We help them out as much as possible. It can’t get any better than that.”

Lenny Hart was at the Miracle Makers Celebration event representing the Department of Kentucky on his American Legion cap where he recently moved to be closer to his grandkids. But prior to his move, Hart lived in New Jersey, where he helped raise more than $400,000 for COTA in memory of his daughter, Susan Ann, who passed away in a car accident in 1995, after which her organs were donated. Hart walked on stage with Lofgren to present him with a New Jersey COTA license plate from his car. Then, Hart raffled off Lofgren’s tie – just like he did two years ago at the event and raised $2,000 for it. This time, the final bid was $1,200.

With Hart now living in Kentucky, Dough Herrin is the Department of New Jersey liaison for COTA. While sitting next to Hart at the table Saturday evening, Herrin said that his new role “gives me an opportunity to have a voice for veterans and kids. To me it’s not about the money being raised … it’s about exposing people to COTA and what it’s about.”

COTA has raised more than $135 million since its founding in 1986, providing thousands of children with life-saving transplants.

“I have heard over and over again that if COTA had not been there to step in and fill the gap when they’re family needed it the most, it would have been financially devastating. On top of it, they were also dealing with the physical, emotional and medical burden that they were facing,” Lofgren said. The evening raised $215,000 for COTA. “But people made gifts to the COTA campaign right when it was needed the most. I think the American Legion Family is a good example of this … of making a difference in the lives of our kids across the country.”