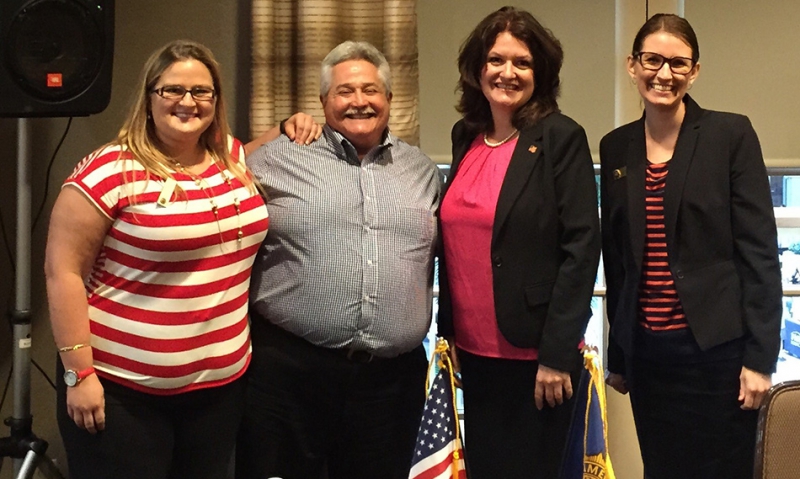 Attorney Elizabeth Ricci (second from right) and her client Mario Hernandez (second from left) with members of Project Vet Relief after Ricci's naturalization and citizenship seminar at the Department of Florida's convention.

Appearing at the Department of Florida's convention, immigration attorney Elizabeth Ricci had a message for the state's foreign-born veterans and non-native veterans everywhere: make sure you are actually a U.S. citizen.

Ricci hosted an immigration and naturalization seminar last week at the Renaissance Sea World Hotel in Orlando as part of the department's annual convention. Her goal in hosting the seminar, she says, was to dispel several common myths about U.S. military service as it relates to non-citizens. It's essential, she says, that non-citizen veterans realize that military service does not confer citizenship, and that those who don't have evidence of their citizenship likely aren't citizens.

"If there is a foreign-born vet out there who does not have a naturalization certificate or a U.S. passport, the reason they don’t is because they are probably not a U.S. citizen," she said.

Ricci, a Tallahassee, Fla.,-based attorney, has represented numerous foreign veterans, pro bono, who were drafted or enlisted in the military, only to find out years later - sometimes after distinguished military careers - that they never were naturalized as citizens.

One of them, Cuban-born Mario Hernandez, was present with her during the seminar. He shared his story of how, after serving in the U.S. Army and working for the federal government for 22 years, he learned that he had never become a U.S. citizen. He got the "surprise of a lifetime" when he was preparing to go on a vacation outside of the country and discovered he did not have a passport.

"For a lot of these guys, it usually surfaces when they are leaving the country to go on a cruise," Ricci said. "They realize they don't have a passport. And all of a sudden, it's the surprise of a lifetime: they aren't actually U.S. citizens."

Ricci said the other common misconception is that the filing fee for naturalization forms with United States Citizenship and Immigration Services is waived for only active-duty military, and not veterans.

"It's a $680 filing fee and that scares a lot of guys off because maybe they can't afford it or don't want to pay it," Ricci said. "The message is that there is no fee for veterans. It's the same as active-duty military."

Ricci's goal is to spread the message to as many foreign-born vets as possible. She says doing so is essential because representing yourself as a citizen can be considered a felony and a deportable offense.

“I have had several of these cases as one person in Tallahassee, and there are 640,000 foreign-born vets in the country today. There has to be more of them out there," she said.