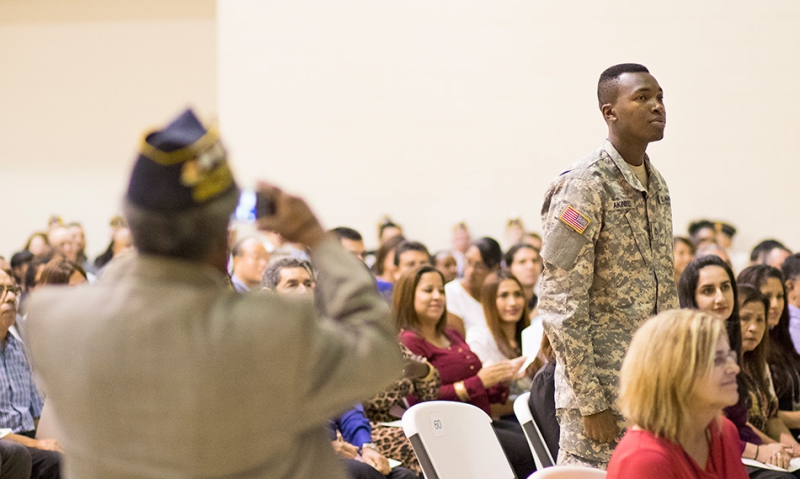 Farsola Akivula was among 150 immigrants who realized their dream of becoming American citizens on Aug. 19 at a ceremony coordinated by American Legion Post 383 in LaPlace, La.

“Today is a very wonderful day, being a United States citizen,” said Akivula, who was born in Nigeria and has lived in the U.S. for three years. “America is a very beautiful country so today is a very happy day for me.”

Post 383 members – and other Legionnaires from District 2 in the New Orleans area – coordinated the event with the regional U.S. Citizenship and Immigration Services (USCIS) office. But Legionnaires did more than just set up the event. They escorted each of the citizen applicants to their seats before the ceremony.

“It was a special touch for special people who have been waiting years for this day,” Post 383 Commander Dave Gatt said. “It was our way of showing them respect.”

That effort - as well as the reception after the event and a voter registration table - made an impression on the new citizens who represented 45 nations including Cuba, Iraq, Pakistan and China among others.

“It means a lot to me that people who fought for our freedoms are still willing to do something for the country itself,” said Akivula, a member of the National Guard who immersed himself in World War II history as he studied for his citizenship test. “It is a really good feeling and something I really appreciate.”

“Back in our early days, The American Legion was involved in citizenship, making sure citizenship was at the forefront of our organization and this country,” Helm said. “That was one of the things I wanted to bring back once again and reach out and partner with the USCIS and have a way to reach out and help them to honor at that moment when an immigrant becomes a citizen. And that is an awesome moment for those citizens.”

Helm encouraged posts to become involved in citizenship programs such as this one. “There are a wide variety of things that can happen between a post and USCIS and the immigrants who are searching for citizenship,” he said. “There are pamphlets out there for people to look at and learn how to become involved. All those posts that are near USCIS field offices need to take a real hard look at this and see what they can do to welcome immigrants into citizenship in this country.”

By working with a local USCIS office, a post can have a significant impact.

Cindy Gomez is district director of the New Orleans USCIS office that oversees Louisiana, Mississippi, Tennessee and Arkansas. Her office handles weekly citizenship ceremonies in New Orleans where about 60 people are naturalized.

“This is one of the biggest ceremonies we’ve had since 2008 or 2009,” she said of the LaPlace event. “I really appreciate the work that we have had with The American Legion in being able to bring this about. We hope this won’t be the end, but the beginning of us doing this on a regular basis.”

Haines moved here from the small island of Grenada with her husband to take care of his father, a World War II veteran, who passed away last year at 92.

“I feel very honored and privileged to finally be a citizen of the United States of America,” she said. “Everyone knows America is the land of opportunity.”