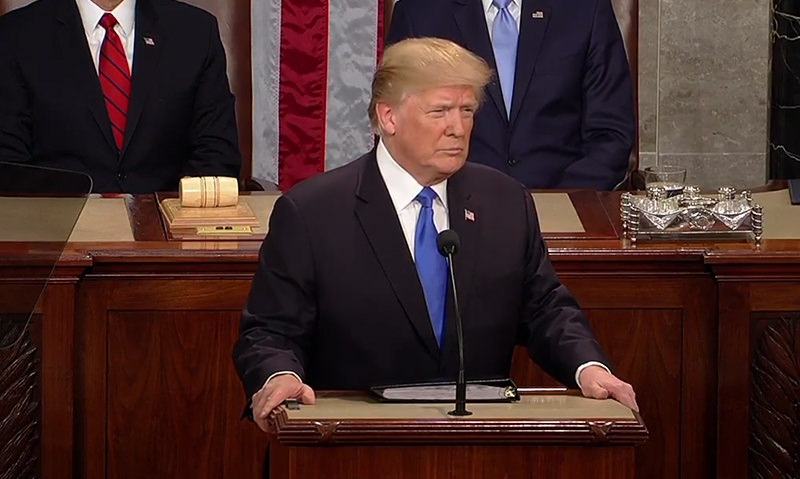 During Tuesday night's State of the Union address, President Trump outlined his plans to overhaul the nation's immigration laws, including a $25 billion proposal to secure the southern and northern borders.

The president also called on Congress to spend more than $1.5 trillion on infrastructure — to rebuild the nation's highways, airports and bridges — during his 80-minute address. "Together, we are building a safe, strong and proud America," he said during his first State of the Union.

Trump touted the passage of the VA Accountability Act, which allows the department to weed out underperforming employees. “Since its signing, ,500 VA employees who failed to give our veterans the care they deserve are no longer employed,” he said. “We are hiring people who love our vets as much as we do.”

The president presented an overview of his immigration plan to members of Congress and the American public. As part of the proposal, Trump wants to end the family-based chain migration policy and the visa lottery program, which admits immigrants from countries that are usually under-represented in other programs. “In the age of terrorism, we must close these loopholes,” he said, referring to two recent terrorist attacks orchestrated by suspects who entered the U.S. via chain migration and visa lottery.

Trump prioritized securing the southern and northern U.S. borders by revving up resources to bolster physical security — including the wall — infrastructure, technology and border personnel.

Additionally, the president is proposing to give legal citizenship status — over a 12-year period — to 1.8 million immigrants who arrived in the United States as children.

He also said that his four-point plan would benefit minority communities. “Struggling communities, especially immigrant communities, will also be helped by immigration policies that focus on the best interests of American workers and American families.”

Trump also addressed other topics of interest to veterans, servicemembers and military supporters:

• Sequestration: "I am asking Congress to end the dangerous defense sequester and fully fund our great military."

• Nuclear weapons: “We must modernize and rebuild our nuclear arsenal, though hopefully we will never have to use it, but making it so strong and powerful that it will deter any acts of aggression.”

• Islamic State: "Last year, I pledged that we would work with our allies to extinguish ISIS from the face of the earth. One year later, I'm proud to report the coalition to defeat ISIS has liberated almost 100 percent of the territory once held by these killers in Iraq and Syria. But there is much more work to be done. We will continue our fight until ISIS is defeated."

• North Korea: “North Korea's reckless pursuit of nuclear missiles could very soon threaten our homeland. We are waging a campaign of maximum pressure to prevent that from happening," he said. "Past experience has taught us that complacency and concessions only invite aggression and provocation. I will not repeat the mistakes of past administrations that got us into this dangerous position.”

Trump also paid tribute to “our veterans who deserve our unwavering support.” Among the president’s guests were those with military connections:

• Staff Sgt. Justin Peck, who has served in the Army for eight years, was part of a team of U.S. troops conducting a multiday mission with partner forces in Raqqa, Syria, last November. Peck’s team was clearing IEDs from a hospital when one detonated, wounding Chief Petty Officer Kenton Stacy. Peck rushed into the building to administer first aid. “Justin bounded into the booby trapped and unbelievably dangerous building and found Kenton in bad shape. Kenton Stacy would have died were it not for Justin Peck’s love of a fellow soldier,” Trump said.

• Retired Marine Cpl. Matthew Bradford, who as a 23-year-old in 2010, re-enlisted despite losing both his legs and his eyesight in an IED attack in Iraq. At the time, he told military officials that he wanted to stay on duty to work with other wounded troops to help them overcome their injuries.

• Coast Guardsman Ashlee Leppert, who helped rescue dozens of Americans during last summer’s Hurricane Harvey. “Ashley, we all thank you,” the president said.

• Preston Sharp, a 12-year-old boy from Redding, Calif., who helped organize a charity drive to place more than 40,000 American flags on veterans’ graves. “Young patriots like Preston teach all of us about our civic duty as Americans,” Trump said. “Preston’s reverence for those who have served our nation reminds us why we salute the flag, why we put our hands on our hearts for the Pledge of Allegiance and why we proudly stand for the National Anthem."