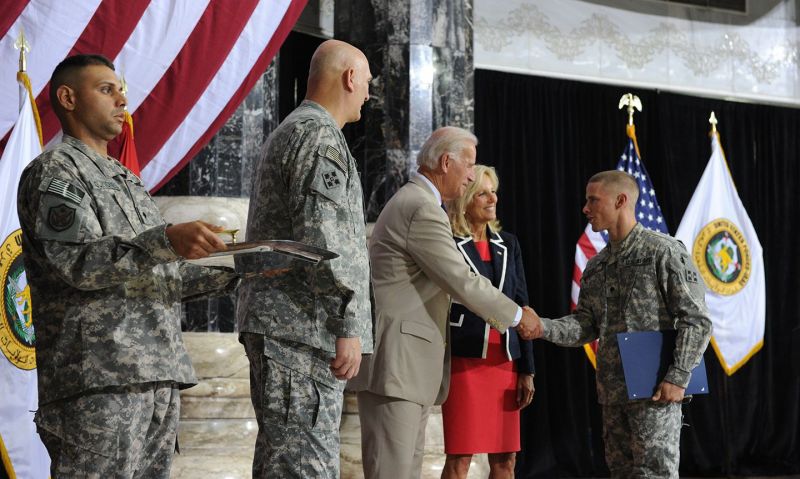 A U.S. soldier receives a handshake from then-Vice President Joe Biden during a naturalization ceremony being conducted at the Al Faw Palace in Baghdad, Iraq, July 4, 2010.

Secretary of Homeland Security Alejandro Mayorkas and Secretary of Veterans Affairs Denis McDonough announced a plan to support non-citizen servicemembers, veterans and the immediate family of servicemembers on July 6.

“It’s our responsibility to serve all veterans as well as they have served us – no matter who they are, where they are from, or the status of their citizenship,” said McDonough. “Keeping that promise means ensuring that noncitizen servicemembers, veterans and their families are guaranteed a place in the country they swore an oath – and in many cases fought – to defend. We at VA are proud to work alongside DHS as to make that happen.”

The Secretary of Homeland Security called the commitment and sacrifice non-citizen servicemembers and veterans have made “profound.”

“We are committed to bringing back military servicemembers, veterans and their immediate family members who were unjustly removed and ensuring they receive the benefits to which they may be entitled,” said Mayorkas.

The American Legion reaffirmed support for immigrants seeking citizenship through service in a statement for the record submitted to the U.S. Senate Judiciary Subcommittee on Immigration, Citizenship and Border Safety ahead of a June 23 hearing on the matter.

For more than 100 years, The American Legion has advocated for those who seek a legal path toward naturalization and first weighed in on the issue in 1919 by passing a resolution at the first national convention which recommended “that American Indians who honorably served in the Army, Navy, or Marine Corps of the United States during the World War be given the full rights of citizenship.”

Approximately 760,000 people have gained American citizenship through military service over the last 100 years. Nearly 24,000 non-citizen immigrants are currently serving in the U.S. military and 5,000 join every year.

“It has been reported from citizenship organizations, national and local news sources, and members of Congress that hundreds, possibly thousands, of veterans have been deported,” wrote Ariel De Jesus, a senior national security policy adviser for The American Legion. “Many of those deported who were interviewed said they were led to believe that citizenship was automatically granted due to their service.”

However, the process was convoluted. The branches of the Armed Services needed to work with U.S. Citizenship and Immigration Services (USCIS) to begin the process of establishing citizenship for the servicemember.

This resulted in many veterans being deported as a result of minor, non-violent or substance related crimes. This could result in veterans being barred from naturalization for life, despite meeting all other criteria for citizenship.

“Deported veterans are exiled from the country they were willing to die for, and their deportation prevents them from accessing the VA benefits they earned and that they are legally entitled to,” said Mark Takano, D-Calif., chairman of the House Committee on Veterans’ Affairs.

In February, The American Legion called on President Biden to issue an Executive Order authorizing the reinstitution of the USCIS for Naturalization at Basic Training Initiative and reopening all USCIS field offices abroad for servicemembers and deported veterans.

“The American Legion believes that non-citizen veterans who are honorably discharged and have not been charged or convicted with felonious or heinous crimes should be guaranteed the promise they were made of citizenship,” said James W. “Bill” Oxford, national commander of The American Legion.

In 2018, The American Legion’s National Executive Committee passed two resolutions that affirmed the organization’s dedication in advocating for the rights of servicemembers who seek citizenship during their military service, as well as those of veterans who have been deported.

“It is imperative that we strengthen military naturalization programs, prevent veteran deportation, and repatriate deported veterans. These policies would protect our servicemembers and veterans permanently with recognition for their honorable service to the United States,” Oxford concluded.