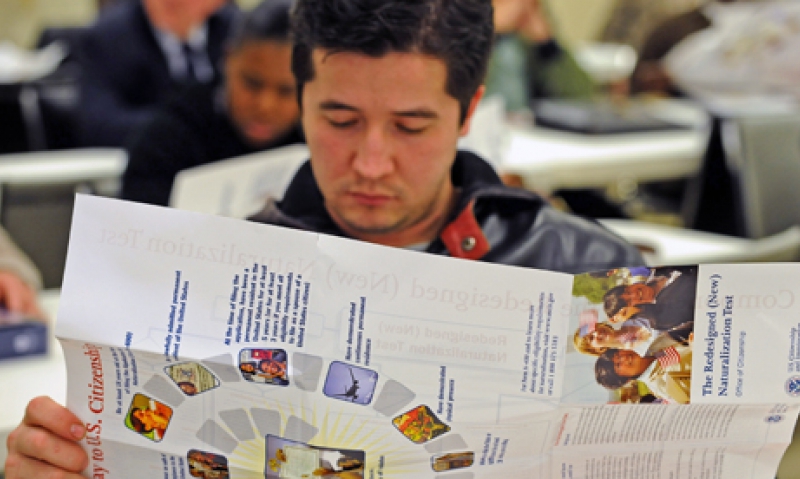 To gain American citizenship, immigrants used to spend hours or even weeks in Ellis Island, being subjected to rounds of medical tests and background checks. The process often would claim lives and split up families.

Those daunting days have long come and past. Fifty years later, Ellis Island is closed, and the naturalization process has been modernized. But, as many immigrants find, it's still not simple.

To help immigrants learn more about the process, American Legion Post 29 in Marietta, Ga., organized an official naturalization class for foreigners who'd like to learn more about becoming citizens. About 20 immigrants gathered at the post Dec. 3 for an educational session, which welcomed as a featured speaker Joe Kernan, a community relations officer with United States Citizenship and Immigration Services.

Kernan went over the particulars and answered questions about naturalization, which can include piles of paperwork and a final examination test in English on U.S. citizenship and government. The process can even be difficult for English-speaking immigrants.

Immigrants received guide books for the new Naturalization Test and got the opportunity to ask Kernan questions. Often the subject of changes and rumors, the naturalization process can create misunderstandings.

Kernan warned attendees that, should an immigration officer ask them if they'd bear arms for their country, rolling up their sleeves and exposing their biceps wasn't the proper response. The anecdote drew chuckles, as Kernan explained that the question was actually supposed to gauge their willingness to defend their country.

A woman from China asked if speeding tickets would affect her chance of gaining citizenship. Generally, only crimes that indicate poor moral character hurt your chances, Kernan explained. Another woman was there attending the class on behalf of her sister who is a legal alien but stranded in the Phillipines because of illness. Kernan warned that staying out of the country for too long can cause loss of residency.

The highest hurdle to American citizenship is often the Naturalization Test, which changed as recently as Oct. 1. The new version tests on the concepts of American democracy and the rights and responsibilities of citizenship, rather than mundane historical facts.

"They have words to study," Beaudin said. "One of the big things was becoming familiar with the language."

The class was the beginning of a series of naturalization educational efforts at Post 29. Working with Transfiguration Catholic Church and USCIS, the post in January will host classes on U.S. government and English as a Second Language.