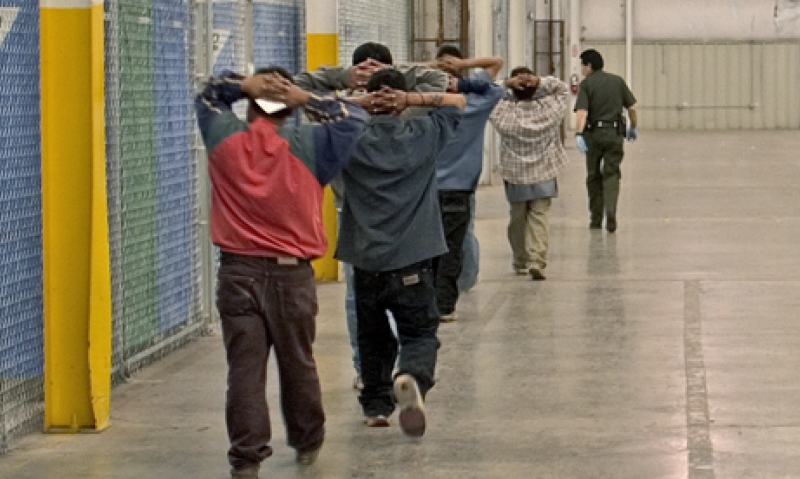 Illegal migrants are placed in holding facilities before they are returned to Mexico. CPB photo

Albert Einstein defined insanity as "doing the same thing over and over again and expecting different results."

While the great scientist was himself a legal immigrant to, and later a citizen of, the United States, it doesn't take a genius of Einstein's intellect to know that America's immigration policy over the last several decades has been broken and the federal government has been derelict in its responsibility to fix it.

While the Obama administration says it's committed to "immigration reform," Americans are rightly concerned that this reform is merely a euphemism for amnesty. When President Reagan signed the Immigration Reform and Control Act of 1986, Sen. Ted Kennedy, D-Mass., said, "This amnesty will give citizenship to only 1.3 million illegal aliens. We will secure the borders henceforth. We will never again bring forth an amnesty bill like this."

The senator was right. Today's amnesty proposals are even worse. They are worse because the population of illegal aliens has skyrocketed to between 10 million and 20 million, depending on whose figures you choose to believe.

Moreover, America has since been struck by a major terrorist attack inflicted by illegal aliens, not to mention numerous failed attacks by those who managed to flout our immigration or entry laws.

The American Legion offers a common-sense strategy to address illegal immigration without offering amnesty or other loopholes that endanger America's national security and threaten our economic well-being.

First, America needs to secure its borders and other points of entry. That means complete the fence, beef up border patrol and deport those who have already been identified as illegal aliens. Deportation does not require a mass round-up as the open-borders lobby would have you believe, but simply processing those who already enter our legal system through other violations.

Additionally, we need to eliminate the jobs magnet by enforcing no-nonsense penalties on employers who hire illegal workers. Likewise, all taxpayer-funded social service benefits - with the exception of emergency medical care - must also be denied.

Finally, and most importantly for our national security, we must effectively screen and track all foreign visitors to the United States. Three of the convicted terrorists who plotted to kill innocent soldiers at Fort Dix, N.J., were illegal aliens. A man accused of assisting the would-be Times Square bomber was also here illegally. Americans have grown accustomed to increased security measures when boarding airplanes. We should expect the increased scrutiny to continue for foreign nationals staying in the United States.

The Obama administration has given strong indications that it does not grasp the problem. While Phoenix is second only to Mexico City in kidnappings, and the Mexican border has seen a recent rise in violence by drug cartels, the Justice Department succeeded in getting a court to temporarily hinder Arizona's attempts to deal with an issue that the federal government has neglected for years.

Moreover, the U.S. Department of Labor produced a video in which its secretary incredibly states, "Every worker in America has a right to be paid fairly - whether documented or not."

The Obama administration is not alone in its misguided approach to this issue. Democratic and Republican administrations have allowed the problem to fester for decades. The issue will not be solved until leaders from all political parties put electoral considerations aside and start putting America's interests first.