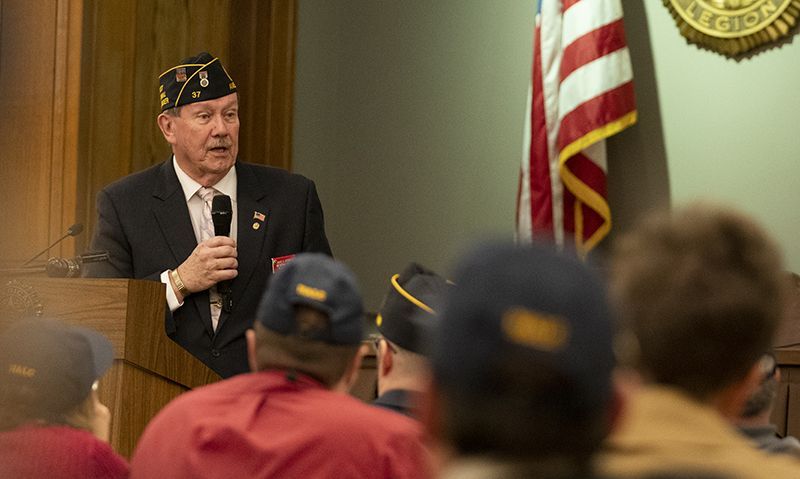 What’s your why to belong to The American Legion? That question has been asked over the past few days to the 2019 American Legion College class as they gather in the NEC Room at American Legion National Headquarters in Indianapolis this week. Several students answered that they joined because of service before self, for God and country as stated in The American Legion’s Preamble, and to take care of veterans and their families.

“What drives my why is that sense of belonging,” said Legion College Chancellor and Past National Commander David Rehbein of Iowa. “Being a part of The American Legion is recognizing that there’s something out there bigger than us.”

Students were randomly called upon to share their why or give a 30-second elevator speech as to why a veteran should join The American Legion.

“My why for joining The American Legion is an extension of what I’ve done for my entire military life,” said Amery Vasso of Post 91 in New Jersey. “I trained and mentored a lot of soldiers, and I always said I have to walk the same ground that my soldiers walk in order for me to mentor and inspire them to do my job. Because that’s always what it was about is filling my shoes. What we need to keep this organization moving on is filling those shoes.”

Their why to joining The American Legion came easy when asked, however, when it came to starting their elevator speech getting the words started as to why one should join didn’t flow so easy.

“We all need to know how to engage our audience. Your canned speeches, as good as they are, you’ve got to deviate from them and realize who you’re speaking with. I can’t say that enough,” said Guillermo Guillen, a Legion College student from Post 180 in Virginia, who served on The American Legion’s 21st Century Committee while on active duty as an Army officer. “It’s super important to engage your audience and not to be the one engaged. Some (post-9/11 veterans) don’t want to hear about my combat experience. But they do care about what we do to support veterans.

“Tailor your conversation to their needs today. Not your needs, not your experiences, their needs.”

A recruiting tool to help with the elevator pitch that both Rehbein and Guillen discussed is the Legion’s Membership Impact Report. “The impact report is a really good tool to help your expansion of what it is you’re selling,” Guillen said.

The monthly report from American Legion National Headquarters presents key impact numbers, voices, activities and history of The American Legion. The report includes statistics that can be used in membership recruitment or to otherwise explain the organization’s role in the nation.

“Our members want to know that they belong to an organization that is doing something,” Rehbein said. He challenged the students to speak with their department adjutant upon their return home and put together a department membership impact report. It doesn’t have to be monthly, but keep it to one page back-to-back. “I think you will find that will have an impact on your membership in your department.”

When the Department of Iowa started one, Rehbein learned that the department’s veterans service officer representative at the VA “did more claims than everybody else put together. You want to feel pride in your membership, tell them that.”