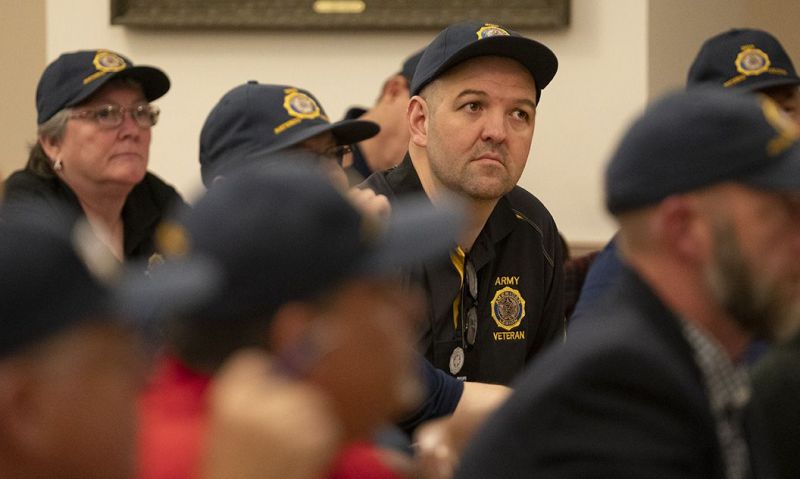 On Friday, 57 Legionnaires celebrated a successful week at National American Legion College in Indianapolis, where they gained a deeper knowledge of the organization, developed mentorship and leadership qualities, explained their “why” when it comes to belonging and recruiting, and much more.

At a graduation ceremony in the NEC Room at National Headquarters, Legion College Chancellor and Past National Commander David Rehbein encouraged and challenged the class of 2019 as they prepared to receive their diplomas.

“Your leadership is going to be dependent upon your communication skills,” Rehbein said. “The better they are, the better you can be a leader. Accept criticism, and never let it get personal. If you’re never criticized, you’re never challenged. But make sure the criticism is valid.”

For post meetings, come early and stay late,” he continued “It’s about creating personal relationships. A big part of this is getting to know each other … we’re all in this together.

Finally, “the only time you should be aware of what color of cap you’re wearing is when you look in the mirror. If you act different because you now put on a white cap … that’s a failure. (No matter the color of the Legion cap), deep down we are all blue caps and need to remain blue caps so we can connect with people at the post.”

The Legion College graduates return home with tools and other resources to continue growing as Legionnaires and to help support their departments.

Michael Downs, commander of American Legion Post 1 in Alaska and the department’s second vice commander, wanted to attend Legion College to learn how he can do more for the organization at the local level.

“I want to help more, and I want to have the tools that I need to do that,” Downs said. “I don’t want to be stumbling around in the dark. (This has been) a great experience. Interacting with other folks here has probably been the best part.”

For Patricia Thurston, sergeant at arms for the Department of Maine, she enjoyed sharing ideas and camaraderie with other Legionnaires. “The experience has been very positive,” she said. “Everybody is lifting each other up and working together.”

Networking through Legion College is “the most valuable piece of your experience,” National Commander James Oxford told the graduates. Further, with what they’ve learned, they will sell others on the benefits of belonging to The American Legion. “You are the best commercial that we can have out there.”

As the graduation ceremony concluded, the students presented Oxford with an $1,800 donation to support his fundraising efforts for The American Legion’s Veterans and Children Foundation.