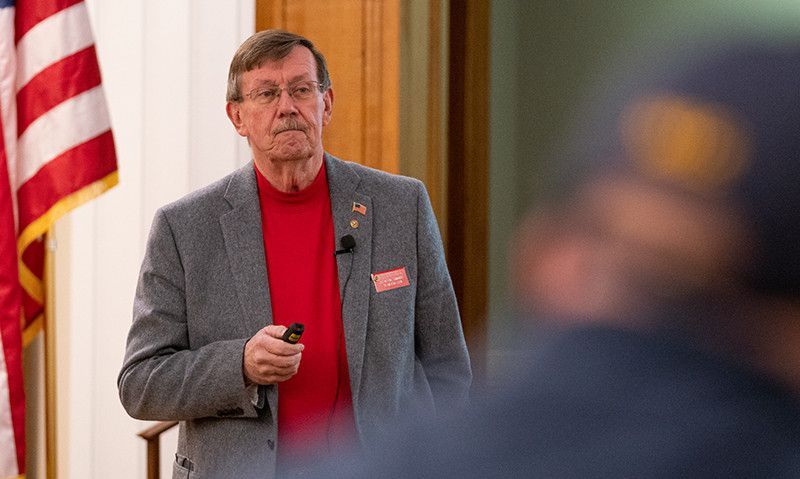 Upon his return home from deployment to Germany in 1971, David Rehbein walked into a café dressed in his Army uniform. His appearance garnered little respect or appreciation, as unfortunately common to military servicemembers during the Vietnam War. He then made the decision to put his military service behind him.

But then, “I was missing something. What I was missing was that spirit of camaraderie,” the American Legion past national commander and National Legion College chancellor shared with the 2020 class during his remarks Nov. 15 at National Headquarters in Indianapolis. “But the day I walked into that American Legion post (because of his wife, Ann, who grew up in the Legion Family) and joined, I found that spirit of camaraderie. You could feel the same feeling you had back there in that Army unit.

Rehbein turned the opportunity over to the Legion College class to share their why. “Because it’s that why that keeps you as a member,” he said. “It’s not what you do … it’s why you do it.”

Joseph Schmidt passed his grandfather’s American Legion cap every day growing up as it laid in his parents four season front porch. He never knew his grandfather, as he had passed before Schmidt was born. In 2012, Schmidt was injured while deployed to Afghanistan and left service two years later. “But my service wasn’t done yet, I didn’t know what else to do,” he shared. “I figured if The American Legion was good enough for (my grandfather), it was probably good enough for me. I walked into a Legion post, signed up and found my place of service where I can continue to serve my community … serve veterans and soldiers.”

“To this day I thank my father for just leaving my grandfather’s (American Legion) cap out there to define my place here in The American Legion,” he said.

Randy Olson’s cousin was shot and injured during a deployment to Afghanistan. “I thought what can I do for him? He has little to none (VA) disability rating since he didn’t lose a limb. I am going to fight for this veteran,” said Olson, a member of American Legion Post 82 in Winnebago, Minn. “One of my whys is that I want to be the one that makes a difference. It gives me more of a drive every day to keep doing more for veterans.”

After listening to several Legion College students share their why, Rehbein said what he heard, and expected to hear, is that “your why is connected very strongly to your emotional attachment to the organization.” Then he laid out a challenge to them.

“Our challenge is to help the younger folks that we’re recruiting into the organization to understand and develop that same kind of emotional attachment to The American Legion,” he said. “And that’s a challenge that we all have to handle individually because every person we approach is an individual. We won’t know what their why is until they find out what it is.”