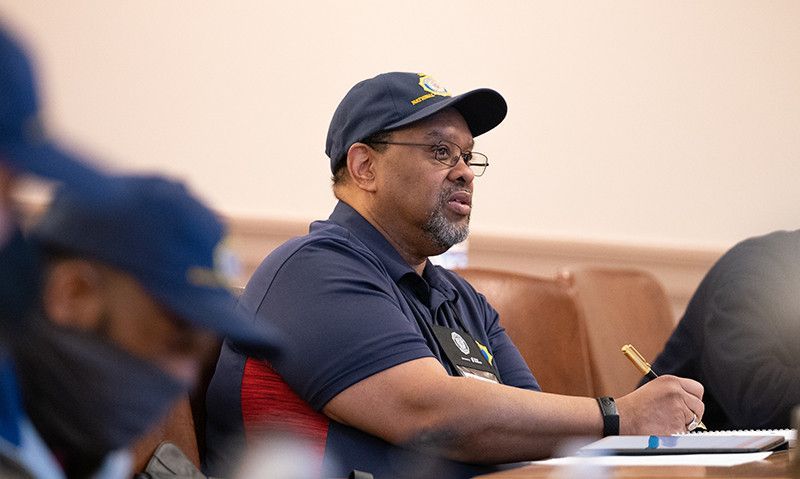 The 2020 National American Legion College class received real-life post conflict scenarios that they were asked to help resolve within their assigned district. A few districts presented their answers to the class Thursday morning.

One scenario was of an American Legion post where 20 years after its charter, the same members held officer positions. However, eventually those officers found they were not longer able to fulfill those leadership positions and soon the post commander took on the role of adjutant, finance officer, etc. But no other member would step up to fill the roles. With no one willing to accept the nomination to serve, the post commander became discouraged during an election meeting and walked out. The district was called in to get leadership at the post going to keep it from closing. American Legion Past National Commander and Legion College Chancellor David Rehbein asked the district assigned to this scenario to share their resolution.

John Dunne III from the American Legion Department of New Jersey gave the resolution presentation for his district. It included the district forming a leadership team to work with the post on addressing the issues and reenergizing the post; creating a strategic plan to move forward for membership growth, and post and leadership development; implementation of training initiatives; and development of communication strategies.

“Why did this happen,” Rehbein asked the class. The response from the class was that it’s the same scenario many posts have in that nobody is stepping up.

“I think what might be a real contributor to this problem … those initial officers really felt ownership and found it hard to let go,” Rehbein said. “And so as you said nobody was stepping up, or were they encouraging anyone to step up? Was there any kind of a succession plan whatsoever?”

Lewis Jones from the Department of Pennsylvania said within his post and district, leadership is constantly reminded to find their successor. “It’s about giving everybody an opportunity to serve.”

Legion College District 3 was tasked with resolving a training incentive put out by the department – the district commander who has the most members completing the online Basic Training Course will receive an award. Resistance to this incentive was met by post commanders, as some members have already completed the course, don’t have computers, etc. District 3 decided to incentivize post commanders as well to get their membership on board. And for members with no access to a computer or unable to complete it at home, they can attend a district meeting to complete it with assistance.

Rehbein shared that what he liked about District 3’s resolution is that “they treated those post commanders comments as valid and addressed them that way and providing solutions, potential solutions, pulls everybody together.”

He added that these post scenarios were not an easy exercise. “It’s going to be hard out there. A trap I don’t want you to fall into is that you don’t have to accomplish this with just your district officers … you have other resources. You have past commanders, you have other interested Legionnaires, you have upcoming Legionnaires. So put your arms around as many resources as you can.”