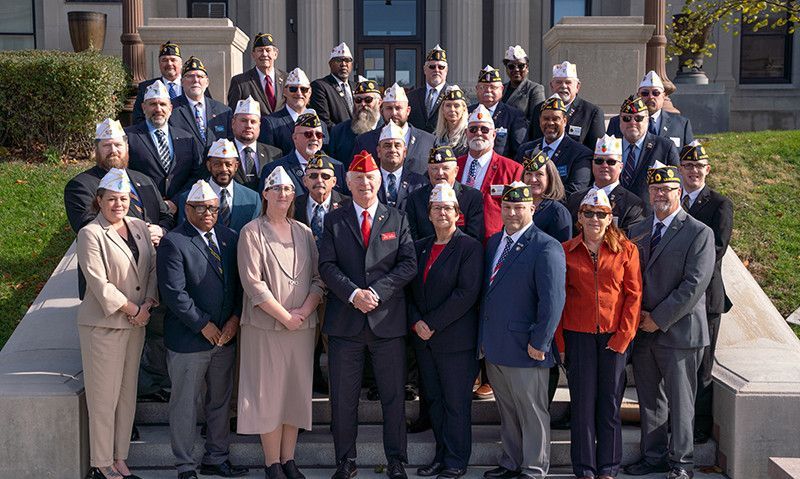 Twenty-eight Legionnaires waited a year because of the COVID-19 pandemic for the opportunity to gather at American Legion National Headquarters in Indianapolis to learn about the organization’s mission, vision and values, and to become the 2020 National Legion College graduating class.

Friday morning, those same Legionnaires earned their 2020 National Legion College diploma and pin in the National Executive Committee Room on the fourth floor of National Headquarters.

He added that over the next two or three years, he expects to attend national convention with many of the students wearing a different color American Legion cap, “having moved up into positions of leadership. I’ve seen students grow this week. I’ve seen how they think about things a little different now, look at problems a little different. And that’s what it (National Legion College) is about.”

Dan Brown from the Department of North Dakota said he learned a lot during the week of National Legion College, but if he had to highlight one thing it would be that “it made me take an internal look at myself and ask why am I here? It’s my fellow Legionnaires and veterans of this nation. I love them.” And not matter what disagreements may arise among each other, “we still have that common goal (of serving veterans).”

American Legion National Commander Paul E. Dillard addressed the class and in his remarks he emphasized that knowledge gained this week must be shared to keep the organization growing.

“A lot of people can read passion when you speak with them … you have to draw them to you. That’s what you have to do when you get back to your departments and posts, you have to draw the Legionnaires in, share what you’ve learned. That’s how this organization is going to grow,” he said. “You are going back to your departments with knowledge, and you have got to use that knowledge to grow this organization. We must continue to fight for our veterans. So no veteran will be left behind. No Legionnaire will be left behind.”