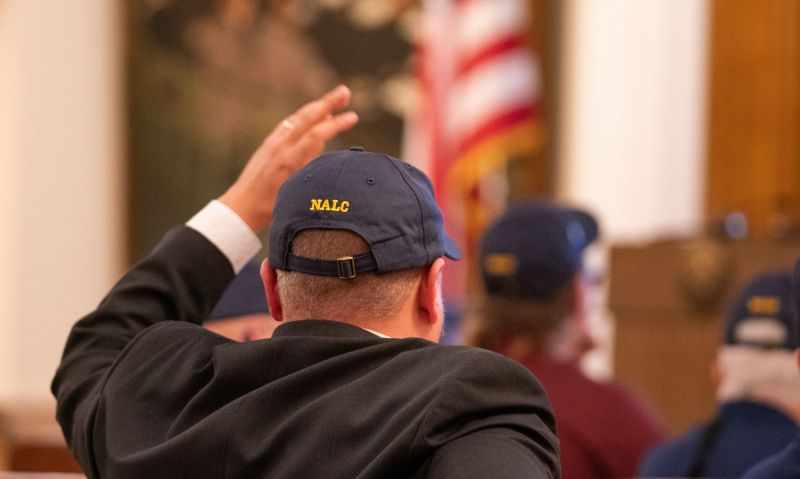 Last year, American Legion Post 371 in Valparaiso, Neb., had a fourth consecutive all-time membership high of 221 members. Post 371 member Daniel Benes said the post has already met 85% of its membership goal this year and is on track to break it.

“We have a good retention rate but more so than anything else in our post we have 92 Gulf War veterans,” shared Benes, a 2021 Legion College student. “We get them engaged, they tell their friends about the good things The American Legion does. These young millennials are probably our best recruiters that we have in our post.

“The veterans are out there,” Benes added. “Remember there are no boundaries for membership. It’s all about telling the good things that we do in our post.”

When a new member joins American Legion Post 145 in Peoria, Ariz., or is transferred in through the DMS program, post member and Arizona District 11 Commander Robert Kimelton said they receive a personal phone call from the commander welcoming them to the post, as well as a survey asking what areas of interests they have. For example, if the member is interested in women veteran issues, the chairman of Post 145’s women veterans committee then contacts the member about joining the committee and getting involved, to whatever extent they want. A mentor is then assigned to the new committee member “to walk with them, engage with them with what’s going on at the post,” Kimelton said. “Our new members are engaged immediately.”

A part of membership engagement is showing members and potential members the value of membership, and where their dues are going. One way to do this is through the National American Legion’s monthly Membership Impact Report. The report highlights the many ways The American Legion is making a difference in the lives of veterans, children and youth, and communities nationwide through legislation, scholarships, grants, programs and more. Suzette Heller, a Legion College facilitator and immediate past Department of Ohio adjutant, mentioned to the class that their respective Legion post or department can make a membership impact report from its Consolidated Post Report.

The Department of Ohio created a CPR Impact Summary Report, a department-wide collection of Consolidated Post Report data presented in key impact numbers that has the look and feel of national’s monthly Membership Impact Report. View an example of the report here.

Whether it’s through a membership impact report, newsletter or even texting, communicating with members is valuable to retention. Kimelton said that Post 145 communicates to its members through text messages about meetings, events and ideas the post has. “Text messaging has a 98 percent open rate in the first 15 minutes of sending the message out. It’s a great way to communicate to your members,” she said.

Legion College student Pamela Krill of Post 36 in Blue Earth, Minn., said that there are over 6,200 members in the department’s 2nd District. As the district’s first vice commander, Krill ran the numbers and discovered only 25% of membership was being reached through email communication. So Krill went through District 2’s membership database and sorted by war conflict and started mailing newsletters out “to our older veterans and got really some great feedback from them because I’m getting letters in the mail about how appreciative they are.” The district stopped mailing newsletters about three years ago and as a result the older veterans didn’t know “what was going on in our district. I know we are looking at moving forward but in some of our districts I feel like we’re forgetting the older generation … I feel they feel we’re running them out.” Krill added that she likes the idea of sending text message to communicate with members.

Ron Neff, a member engagement coordinator in the Internal Affairs & Membership Division, said to the Legion College class during his retention presentation that it’s the member experience “that will shape their decision to stay or go” in The American Legion. With that reminder, American Legion Post 539 Commander in New Bern, N.C., and Legion College student Elizabeth Hartman said, “We have a lot of people not renewing and you can pull that list online and then you can call each person and ask, ‘Why didn’t you renew? And what can I do to get you back?’ It just takes a phone call. Just pull the list, make the calls, and listen to what the non-renewers say.”