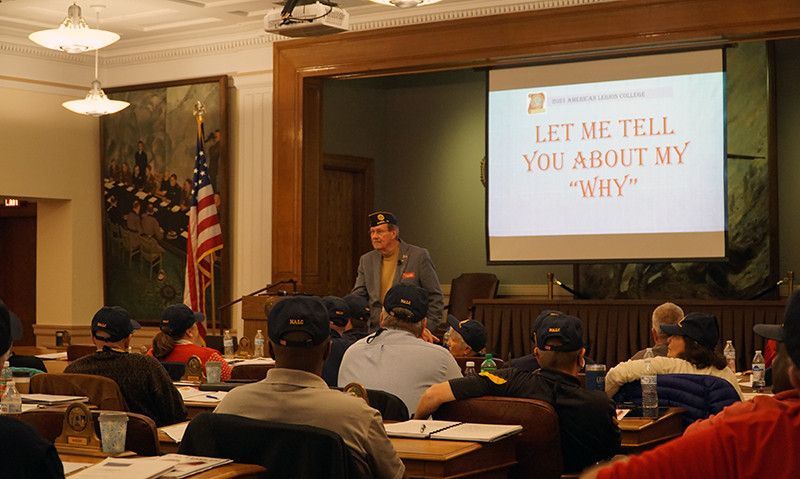 The students were asked to share their why. As many shared, there were tears, applause and all-around encouragement.

A few shared about barriers they’ve had to overcome such as their race, but their why stands strong because “of my commitment to service,” said Willie Branch of American Legion Post 187 in Deland, Fla.; and for Tweila-Rochelle Cauthen of Post 2 in Washington, D.C., it’s because of her passion for the homeless and children and wanting her district “to care how she cares.”

Dale Hutchcraft of Post 159 in College Station, Texas, didn’t know women veterans could join The American Legion. When she walked into the post with her veteran husband, “there was a wonderful female veteran there who is also a Marine. She took me under her wings; that woman became my sister,” said Hutchcraft, commander of Post 159. “It has become a wonderful family to me. And I continue my service too. Those are the emotional things that bind me to my post, and I just love my post.”

Dressed in uniform, Douglas Reighard returned home from service in Desert Storm and waiting for him at the airport were Legionnaires and other veteran service organization members. They carried his bags and when Reighard told them they didn’t have to he said they replied, “No one is going to be treated the way we were treated when we came home.” Now, as a member of Post 551 in St. Michael, Pa., Reighard’s why is, “You’re a veteran, let me take care of you the way I was taken care of. It’s the camaraderie. It’s paying it back. I’m going to stay here and keep doing those things that those guys didn’t have to do for me.”

Once Nancy Laffin became involved with veterans and their families at the VA medical center in Portland, Maine, and heard their stories, she thought, “I got to help these people.” In search of the “best tool” to help veterans and their families, she joined Post 202. Through two mentors at the post, one being Legion College facilitator Matt Jabaut, “I learned a lot about the Legion programs and how to use them as a tool. I found the organization that I needed to use to help people.

“But then I realized it was a family,” said Laffin, filling with emotion. “And I think now I need them more than they need me.”

Feeling welcomed when walking into an American Legion post isn’t the same experience for everyone as was shared among the Legion College class. For Thomas Moore of Connecticut, it’s his goal to make everyone who walks through the doors of Post 13 feel welcomed the way he was.

“When I walked into the post, every single one of (the 16 members at the post) came up to me, introduced themselves and said welcome to the post. I found my why – I can pass on what those members did for me, which was to make me feel welcomed, and to introduce me to what the Legion does. And that’s what I do today.

“When anybody calls or comes into the post, I make sure I walk right up to them and make them feel as welcomed because some day that might be their why.”

Jennifer Monserud, a member of Post 37 in Ames, Iowa, was presented a membership card 25 years ago. But it wasn’t until she went through a difficult time following her transition out of military service that she began to develop her why for staying in The American Legion. While she can’t pinpoint her why on one thing, she just knew “I needed to continue my service to be a part of something bigger than myself and this is where I found it.”

In response to those that shared their why for joining and staying in The American Legion, Jeff Daly said, “My why is rooted in a lot of these stories.”

When Daly, a co-host of The American Legion’s Tango Alpha Lima podcast, walked into his now post home of Hollywood Post 43 he was greeted with a warm welcome. “I felt this big, huge welcome that some of these people aren’t feeling.  I want everyone in The American Legion everywhere to have that same feeling that I had. I don’t want someone telling you that you can’t be the post commander (because of race or gender). My why is hearing all of these things because that’s all I want to do is communicate the bastion of greatness of The American Legion. I want to change the perception of the Legion, I want to start conversations that they don’t think we can have because there hasn’t been the right venue. I don’t think that (mission) will ever expire. It started pretty much when I walked in (to Post 43) and Jennifer Brofer, United States Marine, said ‘welcome to the post.’”