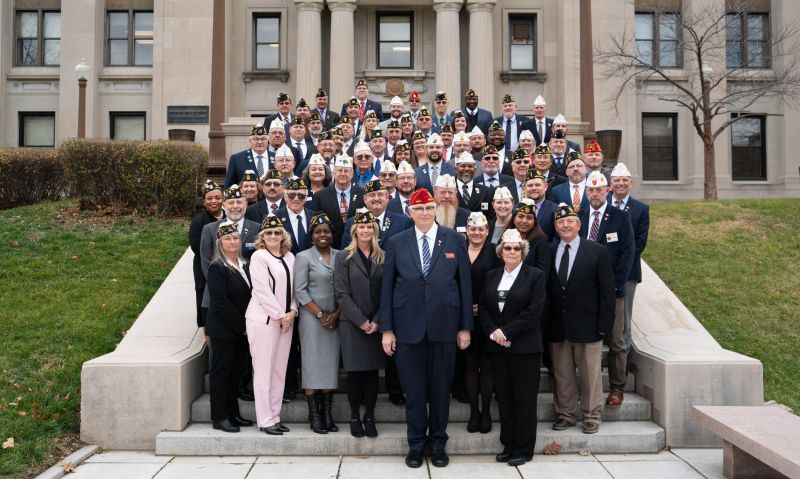 The National Executive Committee Room on the fourth floor of American Legion National Headquarters in Indianapolis was filled with the 2022 National Legion College Class on Friday morning. The 54 students representing 38 departments were graduating after attending the week-long program where, among many things, they discussed and resolved real-life post scenarios; wrote, presented and debated resolutions; developed institutional knowledge through national staff and Legion College facilitator presentations; and built effective leadership skills.

LaKesha Stringer of Post 35 in Columbus, Ga., said she has a list of things she didn’t know about The American Legion until attending National Legion College that she will take back to her post to share. “I’m ready to take them back,” said Stringer, whose Senior Vice Commander Melvin Weaver attended graduation to support her. “I’m grateful that my senior vice commander came to cheer me on for the graduation. He flew all the way here. It’s more of an impact for me to have him here.”

Weaver, a 2018 National Legion College graduate and 2020-21 facilitator, said he wanted to be here to support her. “I want to start that in the department that when we send somebody here, we come and support them. She did a great job. Now the real work starts.

“I’m proud of you,” he said to Stringer.

National Legion College facilitator Don Madden from the Department of Alabama said it was “humbling” for him to see complete strangers come together and now leave as a family because of the relationships the program creates. It’s those connections that had the most impact on student Samuel Johnson of Post 29 in Washington, Iowa.

“I think everyone should take away from here is the relationships that you make,” he said. “The networking that this class offers is remarkable, like no other experience you’ll get in The American Legion.”

Prior to 2022 National Legion College Class earning their diploma and pin, National Commander Vincent J. “Jim” Troiola stood before them to impart a few remarks about the Legion’s Be the One initiative to prevent veteran suicide. He asked each Legionnaire to go back to their post and start making Buddy Checks before Christmas next weekend as the holiday season can be lonely for many veterans. “You need to reach out to (your post members). No issue is more important to The American Legion than preventing veteran suicide. Through Buddy Checks and simply by initiating informal conversations, we can all ‘Be the One’ to save a life.”

If a Legionnaire identifies a veteran in crisis through Be the One, Troiola asked the Legion College students to not leave them after getting the veteran the help they need – “you need to stick with them,” he said. “No matter how big or small it is, it could be a ride to the doctor’s office, it could just be a handshake, or it could be just a chat … that’s a really big piece of this (Be the One initiative). And develop relationships with their families. Because a lot of times if you haven’t quite removed the stigma of that veteran stepping forward, that veteran doesn’t have the courage to come forward, maybe their family members can help.”

Troiola emphasized to the Legion College class that the Be the One initiative is a nationwide challenge. “We want everybody involved in (Be the One). It’s a big challenge; it’s not going away, it’s not a Jim Troiola theme. (Be the One) is going to be ongoing. And I challenge you to be a part of it. Are you up for the challenge?”

“Concentrate on that one veteran that you can help,” Troiola said and not the number associated with veterans who die by suicide daily. “And we will all be better off for it.”