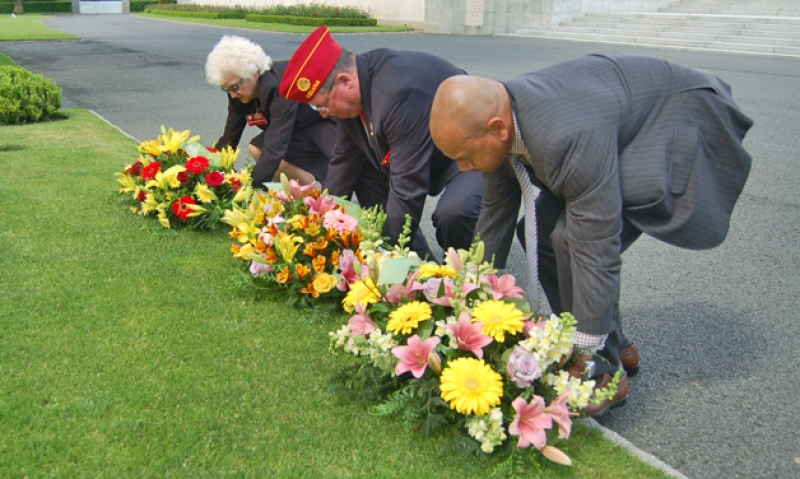 "It was important to me to visit the graves of Americans that don't get the same attention as those at the more famous cemetery," Koutz said after he and American Legion Auxiliary National President Peggy Thomas laid wreaths at the Brittany American Cemetery south of the historic Normandy beaches  where hundreds of thousands of Allied military personnel came ashore in 1944 to enter the campaign that ended Nazi Germany's hold on Europe. Many of those buried at the Brittany cemetery (which is actually in southern Normandy) lost their lives in the D-Day invasion. Many others were aviators who were buried at seven different temporary cemeteries in the region during the war and immediately afterward.

Cemetery Superintendent Jeffrey Aarnio met the commander, president and their delegation and described the history of the site, which was on the path of pilgrimages between Mont St. Michel and Santiago de Compostela in Spain during the Middle Ages.

"Today you are the pilgrims who came from afar to render honors to those men who are still being looked after by the American Battle Monuments Commission," Aarnio told Koutz, Thomas and a group from USAA, preferred provider of financial services for The American Legion.

Bob Lockett of USAA and Robert Oeth, an Indiana Legionnaire, helped Koutz and Thomas lower the colors at the end of the day at the Brittany cemetery near the town of St. James, which receives about 40,000 visitors a year compared to about 1 million a year at the Normandy American Cemetery overlooking Omaha Beach.

The commander and president are participating in ceremonies and activities through the weekend in honor of the 69th anniversary of the Normandy invasion.