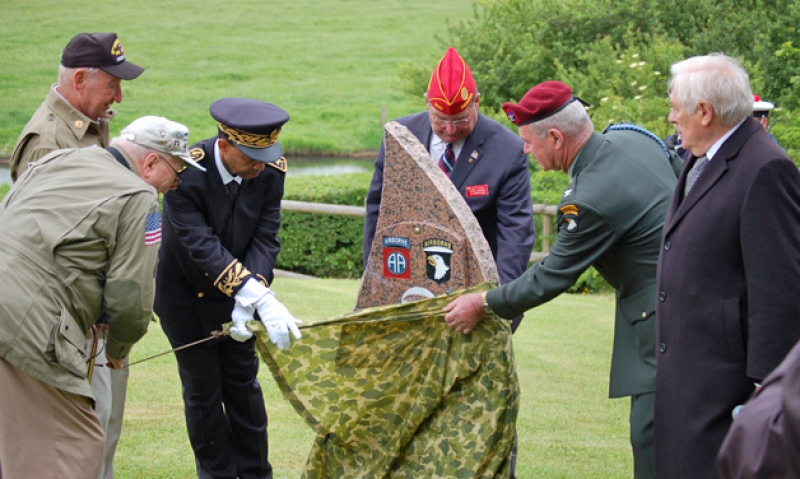 Paratroopers from France, Germany and the Netherlands jumped into the Merderet River plain near La Fiere Bridge, where one of the bloodiest small-arms battles of U.S. war history was fought June 6-9, 1944. More than 300 Americans and approximately 1,000 Germans were killed in the battle.

Eleven active-duty U.S. paratroopers came to Normandy on their own and jumped at various events during the week. Among them was Ben Van Buren, an Operation Enduring Freedom veteran now stationed in Germany. The Gainesville, Fla., Legionnaire did not participate in the Sunday exhibition near La Fiere Bridge after having broken his nose and injuring an arm in earlier jumps during the week of tributes to the airborne invasion. He jumped at Utah Beach, Mont St. Michel and Carantan on his first visit to Normandy.

"I actually got to sit in the door of a C-47 that flew on D-Day," Van Buren told National Commander Koutz as thousands gathered to watch the jump Sunday. "It still had the old shrapnel holes. I cried. It was an awing moment."

Sunday's commemoration included a wreath laying by Koutz and Thomas, along with other dignitaries from France. World War II medic Duane Pinkston received the French Legion of Honor medal during the event. Pinkston, 89, made his first combat jump at La Fiere in the early-morning hours of June 6, 1944, and fought 33 continuous days without relief as U.S. forces secured the Cotentin Peninsula on their way to Berlin. He later jumped in Holland, fought in Bastogne, was wounded three times and helped liberate a concentration camp.

The commander was called forward to unveil a new monument near La Fiere Bridge, honoring all who made the airborne invasion a success. The monument features the insignia of both the 82nd and 101st Airborne Divisions of the U.S. Army and was installed by Amis des Veterans Americains, an organization based in Ste. Mere-Eglise dedicated to the continuous friendship between U.S. veterans and the French people who were liberated after four years of Nazi occupation thanks to those who fought in the D-Day invasion.