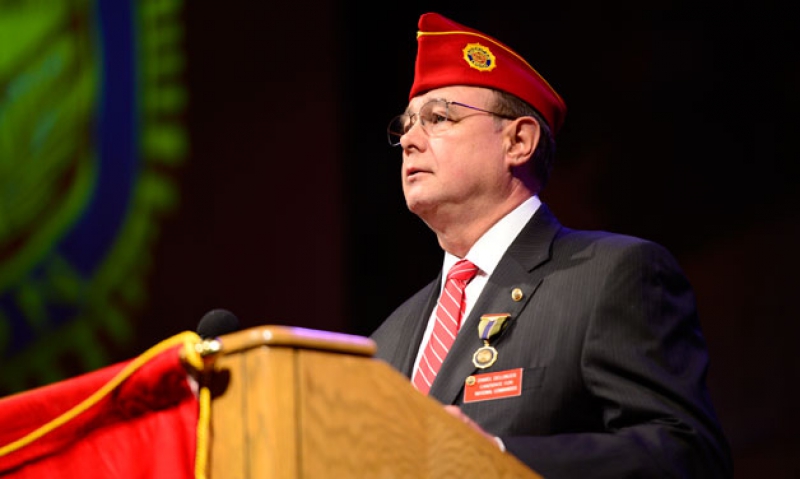 National Commander Daniel M. Dellinger was elected the newest leader of The American Legion at the 95th National Convention in Houston on Aug. 29. (Photo by Eldon Lindsay)

Newly elected American Legion National Commander Daniel M. Dellinger likes where The American Legion has been. But where it’s going is his concern as he heads into his year as the leader of the nation’s largest war-time veterans organization.

Elected Aug. 29 by a unanimous vote during the Legion’s national convention in Houston, Dellinger – a U.S. Army Vietnam War veteran and Legionnaire for more than 30 years – said the Legion must continue to adapt to a changing world and a changing group of veterans.

“We... have rich traditions and a 95-year storied history,” Dellinger told convention delegates. “But is that enough as we move towards our 100th anniversary and beyond? Just as our country has evolved since 1776, we must continue to evolve.

“Two years ago, at the beginning of my campaign, I adopted my slogan for this year – “Building for Tomorrow Today.” With my background in construction, I know you need a good set of plans and a solid foundation if you are going to build a structure to last. We have a rock solid foundation in the American Legion, our 95 years of service to our veterans, our communities and our nation, so what we need is a plan to get us to the next level and above.”

Dellinger said that developing that kind of foresight already has begun in the Legion.

“Through the actions of the National Executive Committee and this convention body, we have passed resolutions that set in motion the changes we need to stay relevant to our service men and women, our veterans, our communities and our nation,” he said. “There is a change in the air, a new culture of growth in membership.

“Some voices in the media say that we are a dying organization. I disagree, and seeing all these faces in this room today, I know you do, too. If we’re going to grow, we need to step it up. We need everyone on this construction team to lend a hand and build our membership back to our all-time high.”

Doing so will require buy-in from the entire Legion, Dellinger explained.

“We have requested that every department formulate a five-year and beyond membership plan to grow our membership to an all-time high,” he said. “That plan will be used in monitoring our growth as we move towards our 100th anniversary date and beyond.”

Dellinger has solid membership experience under his belt, having served as chairman of the Legion’s National Membership & Post Activities Committee in 2001 and 2002. “Both years we made our goals,” Dellinger said. “It wasn’t me. It was you – everyone in this room. It was because everyone bought into the plan and worked together. We can do that again this year.”

Shifting his focus to issues, Dellinger said he and Legion representatives will continue to be a strong voice in the nation’s capitol for U.S. servicemembers, veterans and issues relating to national security. Dellinger will testify before a joint session of the House and Senate Committees on Veterans’ Affairs Sept. 10 – but he said the Legion won’t get the full credit it is due during that testimony.

“I will report on the hours donated, the monies raised and expended to serve our veterans and our programs, but unfortunately, the numbers won’t depict the true picture of who we are,” he said. “Only 57 percent of all posts this past year submitted their Consolidated Post Reports. I have already had a discussion with most of the department commanders requesting their assistance in obtaining 100-percent reporting this year. Remember post commanders, the job is not done until the paperwork is filed. I will continue to reinforce this message as I travel to departments this year.”

Dellinger praised outgoing National Commander James Koutz for leading a fundraising effort that produced more than $1.1 million for Operation Comfort Warriors this year and said the Legion’s National Emergency Fund would be his focus for fundraising.

“Recently, we have seen many dramatic natural disasters challenging our veterans and families here at home,” Dellinger said. “We have expended three-quarters of a million dollars in aid through the National Emergency Fund this year alone. We need to raise funds to guarantee that if a deserving and qualified veteran needs our assistance, monies are available for that assistance.

“My commander’s project will be to raise $1 million for the NEF. It’s a very lofty goal, but one that equates to about 50 cents per member. We can do it. Given the recent tornados in Oklahoma, Hurricane Sandy and other hurricanes, and the deadly wild fires in the western states, the question is not if a natural disaster will hit, but when and where. So I encourage you to support fundraisers for this most worthy cause.”

Dellinger also will lead efforts to continue to make the Department of Veterans Affairs accountable to the nation’s veterans. “You have heard the administration assert that the backlog on claims was and is continuing to be reduced,” he said. “We are and will continue to monitor this issue. It is not about how many as much as it is how accurate these claims are. We will continue to educate our service officers to ensure we maintain our degree of accuracy in processing fully developed claims. We will continue to visit VA hospitals to ensure all veterans receive the best care possible under the ‘System Worth Saving.’”

A member of Dyer-Gunnell American Legion Post 180 in Vienna, Va., since 1982, Dellinger lives in Vienna with his wife, Margaret. He earned a degree in criminology from Indiana University of Pennsylvania, and owned and operated a construction management and general contracting firm for 25 years that specialized in commercial, institutional and industrial construction.