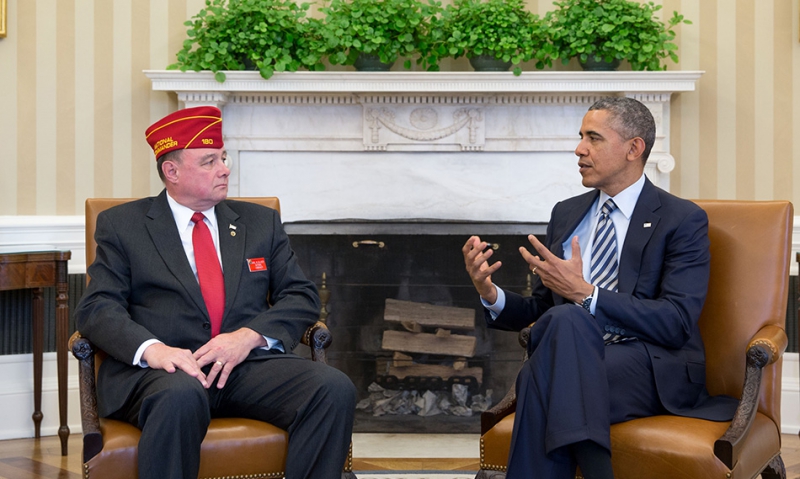 In a one-on-one meeting this morning in the Oval Office, American Legion National Commander Daniel Dellinger shared the Legion’s concerns on a variety of issues with President Barack Obama. The 20-minute meeting was part of a busy morning for Dellinger, who earlier spent an hour with Department of Veterans Affairs Secretary Eric Shinseki.

During the meeting with Obama, Dellinger said the pair discussed easing licensing and credentialing requirements for veterans, the White House’s Joining Forces initiative and the Legion’s role in reducing the VA claims backlog through promoting the use of fully developed claims.

“The meeting went very well,” Dellinger said. “I thanked him for what he did as an administration in moving a lot of these issues forward. He recognized (fully developed claims), and we talked about the interoperable medical record (between VA and the Department of Defense). I asked him about milestones, and he said, ‘We’re working through that process.’ They’re having regular meetings, and his staff is an integral part of all of this to ensure that it stays on schedule.”

Dellinger didn’t get an opportunity to address the Legion’s concerns with sequestration with Obama. “We wanted to do that, but time didn’t allow it to happen,” Dellinger said. “I’m sorry that it didn’t because I think it’s important we continue that fight. Sequestration’s not good for anyone.”

During his meeting with Shinseki, Dellinger said VA construction projects, the claims backlog and shared medical records with DoD were discussed. But a large portion of the conversation focused on transparency within VA and how the agency is dealing with a rash of preventable deaths of its patients. During an April 9 hearing in which Dellinger provided oral testimony, Rep. Jeff Miller, R-Fla. – chairman of the House Committee on Veterans Affairs – said that dozens of VA hospital patients in Phoenix may have died while awaiting medical care, and that committee staff investigators also have evidence that the Phoenix VA Health Care System keeps two sets of records to conceal prolonged waits that patients must endure for doctor appointments and treatment.

“They are taking this very seriously and looking at these issues,” Dellinger said. “A lot of this would never have come to light if it hadn’t been for their efforts to go back through the records and see what they thought were preventable deaths. He identified 78 cases, and 23 have been attributed (to being preventable) at this point. They’re going to do further reviews on those, also. But he says any death is a tragedy, and we agree with him on that. But they also need to be more transparent, and he says he is working on that.”

Dellinger said he was told both by the president and Shinseki, “That if you all see anything … let us know and we will act on it. And as the president stated, we’re the boots on the ground. We’re out there every day and working hard for our veterans. He realizes that, and he thanks us for what The American Legion does for veterans.”