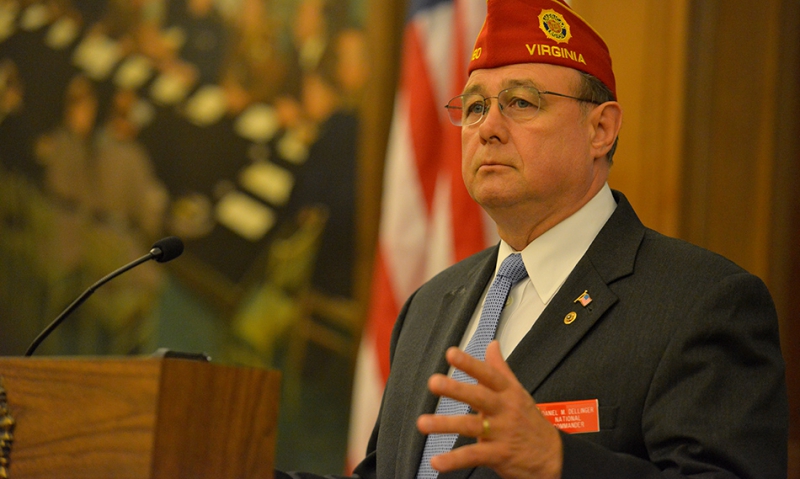 American Legion National Commander Daniel M. Dellinger used his closing remarks on Thursday morning at the end of Spring NEC Meetings to issue a stern reminder: the Legion is only as strong as its members.

That sentiment, Dellinger said, was proven true earlier this week when The American Legion called for the resignation of VA Secretary Eric Shinseki and two of his top lieutenants, and the media - and much of the news-watching public - listened.

Dellinger said the Legion's stance received such acclaim and respect because it had 2.4 million members standing behind it.

"We earned a headline in today’s New York Times, which calls us 'one of the nation’s oldest and most influential veteran’s organizations'," Dellinger said to a room filled with National Executive Committeemen and Legion dignitaries. "Do I need to remind anybody in this room why we are the most influential? Our (membership) numbers are a big reason why."

Since the Legion demanded the ouster of Shinseki and two other ranking VA officials in the wake of an administrative scandal that cost veteran patients their lives, the national media has not only devoted a great deal of attention to the Legion's position, they have looked to the Legion for continued coverage of the matter. Dellinger pointed out that several media outlets - The Arizona Republic and Phoenix's NBC affiliate - have requested to attend next week's "town hall meeting" in the Phoenix area which the Legion will host as part of its System Worth Saving site visit to the Phoenix VA.

The Phoenix VA Medical Center is where the scandal began, as CNN reported that at least 40 veterans' deaths went undocumented there in an administrative cover-up. The so-called "secret list" is alleged to have misrepresented patient waiting times at the facility, keeping unpublic the names of veterans who perished as a result of long-delayed appointments.

"I just told Chris Cuomo on CNN this morning that one veteran’s death is tragic, a preventable death is unforgivable," Dellinger said.

The Legion immediately had the ears of the media and the collective public, but Dellinger cautioned that the organization can't take its clout for granted. Dellinger told the NECmen and department commanders in attendance on Thursday morning that they must take it upon themselves to continue growing the membership base in their departments if they want the Legion to retain its spot as the nation's largest - and ultimately most influential - veterans organization.

"Many important resolutions and issues were discussed during this NEC Meeting. They all matter," Dellinger said. "But the one most important message that I want you to take from this meeting is that without a growing, vibrant membership – there can be no advocacy for veterans. If we don’t do it, who will?"