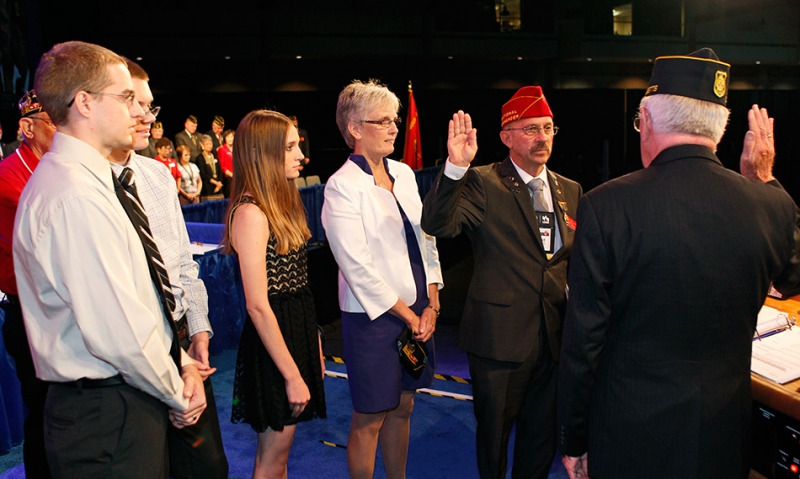 Department of Nebraska Legionnaire Mike Helm wants his fellow Legionnaires to “stay the course” this year. But don’t think for a minute that means maintain the status quo.

Helm, elected American Legion national commander Aug. 28 during the final day of the 96th Annual American Legion National Convention, said during his acceptance speech that he wants Legionnaires to stay true to the ideals of the organization’s founders and use them as a guide toward future progress.

“That is the plan for this year: stay the course,” Helm said. “And no, I do not mean that we shouldn’t raise the bar and constantly seek to improve. What I mean by ‘stay the course’ is to continue to live and honor the great traditions and values established by our founders nearly a century ago. These policies and traditions that got us here will continue to guide us forward.

We are a God and country organization, and we will not apologize for that. We know that a veteran is a citizen of this country who has offered his or her life to honor this nation’s commitment to justice freedom and democracy, and by that action has had his or her life radically and sometimes violently changed forever. We will not let this nation forget that we owe that individual respect and any help they need in making their lives whole again.”

He will use his VA&R experience this year to focus on current issues with the Department of Veterans Affairs.

“Under the leadership of our (immediate Past National Commander Dan Dellinger), we have drawn the line in the sand,” Helm said. “We say now that the health-care needs of the individual veteran must be met in a timely manner. We say that the VA can do a better job in the claims and appeals process. At the same time, we will continue to seek out answers to what went wrong at the VA and why it went wrong." Those people involved in the scandals have to be held accountable, Helm said.

“We know that what happened wasn’t an accident or a circumstance. There is an entrenchment in VA that is not helpful to veterans’ health care or compensation. We will find it and get rid of it. At the same time, we will continue to support the VA as a national provider of veterans’ health care. We need our VA medical facilities because we know it can be and is the best care anywhere if administrated properly. "Those calling for the end of the VA and privatization of veterans health care are wrong. We continue to see The American Legion as partners and friends of the VA. We know they can and will do better."

National security also is on Helm’s radar. “We cannot continue to see the mounting crises erupting in the world and still think it is a prudent thing to reduce our military force and training,” he said. “Those forces of evil and hate are enemies of our way of life. This nation must be ready to answer that challenge.

“We will also continue our efforts to end illegal immigration. It is a national security issue of great importance. Fair and legal immigration is a good thing that has helped build this country into a great nation. We must continue that process. Anything else is a constant danger – especially amnesty proposals which seek to reward illegal behavior and penalize those who have waited patiently to immigrate the legal way.”

Helm said the Legion will continue to support its youth and Americanism programs, saying those programs “make up the fabric that keeps us strong as a nation.” And rather than focusing on a specific fundraising program, Helm has set a goal for the Legion Family to raise a combined $4 million for the various Legion charitable programs.

“I am leaving the choice of fundraising to you,” he said. “All I ask is that you give. America is paying attention to The American Legion not just because we are right on the issues, but because we are doing these great things in our communities.”

Many of those charities benefit not only members of the military and veterans, but also their families – which matters, Helm said. “Most veterans believe that the nicest thing you can do for them is to be kind to their families,” he said. “The most common request of a soldier who is dying on the battlefield is ‘tell my wife I love her.’ Nothing will be appreciated by a veteran more than taking care of his or her family. And that’s exactly what these programs are intended to do.”

When it comes to membership growth, Helm said he wants Legionnaires to focus on the four Rs: recruiting, revitalization, renewals and reconnecting.

“We will always be about service first, but folks, we can’t provide the programs or the service without the membership,” Helm said. "Practice those four Rs. Recruit every eligible veteran that you come in contact. Recruit their sons, grandsons, wives, daughters and granddaughters into the American Legion Family.

“You don’t need to be near a military base to reconnect with servicemembers. Reserve and Guard units have deployed in record numbers since 9/11, and most are eligible for American Legion membership.

“Renewal efforts shouldn’t just include those who left your post in the past year, but check back on those who might have left five or even 10 years ago. They might have had a change of heart or simply forgot to renew because nobody was pro-active enough to take an interest in them. And National Headquarters also offers plenty of resources available for posts that wish to revitalize. Think of it as a 5-Hour ENERGY Shot for a tired post."

Helm took time to honor Jerry Hedrick, the longtime National Executive Committeeman from North Carolina who passed away unexpectedly Aug. 25 during the convention. “Jerry Hedrick … was a presence in this organization for so many years that he has touched the lives of us all in a very good way,” Helm said. “Jerry was always positive. I don’t believe I ever heard Jerry say a harsh word about anyone. He would look at an issue and give you an honest course of action that he thought was best for you and best for the organization.”

Helm was surrounded by many members of his family on the stage – and by two others from more than 6,800 miles away. Helm’s son Aaron and his wife, Robie – both currently stationed at U.S. Army Camp Arifjan in Kuwait – were able to watch Helm be sworn in via Skype.