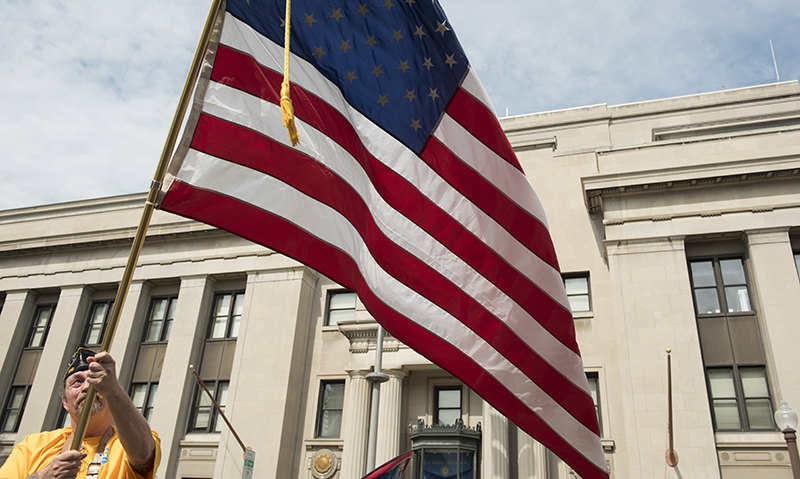 American Legion National Commander Charles E. Schmidt was delighted to learn on this historic Flag Day that U.S. Sen. Steve Daines, R-Mont., has introduced a bill to give Congress the authority to prohibit physical desecration of the U.S. flag. The measure follows introduction of a similar bill in the House on Feb. 2 by Rep. Steve Womack, R-Ark.

“Both houses of Congress now have the opportunity to do what most Americans believe should be done – pass a constitutional amendment to protect the U.S. flag from deliberate acts of physical desecration,” said Schmidt, leader of the nation’s largest organization of wartime veterans. “The 5-4 1989 Supreme Court decision that defined U.S. flag burning as free speech demands a constitutional amendment in order to return to the states the ability to protect our nation’s sacred symbol of freedom and unity. We can argue all day long that flag burning is behavior, and not speech, but that doesn’t change the court’s ruling. It will take a two-thirds majority vote in both the House and Senate now to get this passed, and three-fourths of the states must ratify it. I am calling on all American Legion members and everyone in this nation who understands the colors of our country and all the lives that have been lost fighting for liberty under them, to contact their congressional delegations to co-sponsor these bills and push to give the flag amendment a floor vote. Our flag deserves it.”

The American Legion has fought to return to the states the ability to protect the flag since the Supreme Court took it away in its much criticized Texas v. Johnson ruling.

Weeks after the decision in 1989, The American Legion and American Legion Auxiliary formed the Citizens Flag Alliance, a consortium that grew to more than 100 other organizations that seek protection of the flag. In 2006, the flag amendment measure came within one vote of achieving the necessary supermajority in the Senate, after the House overwhelmingly achieved the necessary two-thirds support. In successive congressional sessions since then, flag-protection amendment measures have been introduced but have not advanced out of committee for floor votes.

“This Flag Day is the 240th anniversary of the resolution passed by the Second Continental Congress that adopted our banner of stars and stripes, representing, as the patriots said at the time, ‘a new constellation,’” Schmidt said. “Since then, over a million Americans have died fighting under that constellation, for the liberty of others and the protection of us all. If any exception should be made to our Constitution, which we deeply respect, it’s the flag that symbolizes every right and freedom written into it.”