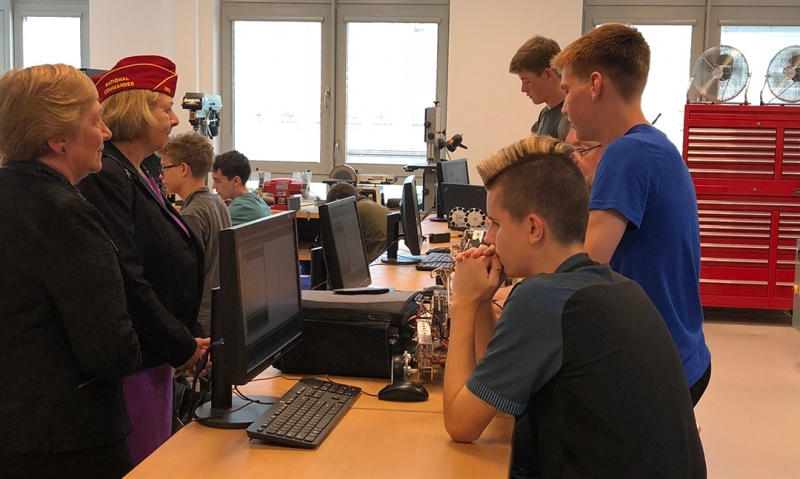 American Legion National Commander Denise H. Rohan brought her message of “Family First" to top U.S. military officials in Germany this week as she embarked on a visit to The American Legion Department of France.

It’s a perception that The American Legion is working to change through visits to military installations, National Guard and reserve units throughout the United States and overseas.

The visit included a tour of Wiesbaden High School, a facility that just completed its first year educating children of Department of Defense personnel. Its principal, Dr. Sandra Whitaker, is a strong supporter of American Legion Family programs.

“I know all of the programs are fabulous, but Boys State and Girls State are life-changing experiences for them,” she said of her students. “They come back thinking about our nation and citizenship. They learn all of the things that we want people to practice in order to be good citizens.”

Military children have challenges that many of their peers with nonmilitary parents don’t face. “I’m 16 years old and I’ve moved 10 times,” J.J. Rivera, a 10th grade Wiesbaden student, told the delegation. “But it’s good. I’m used to it and I have a big circle of friends from all over.”

“What I notice about military families is their resiliency,” Rohan said. “I always have said that it’s not just the veteran that serves, it’s the entire family. We’ve learned that teenaged children of military personnel stationed in Germany have a difficult time finding jobs because of onerous security regulations and a lack of opportunities on bases. Like military spouses, these teenagers have to quit their jobs and start over when their family has to relocate because of change of duty station. Some are required to pay out-of-state tuition if they decide to attend college back in the United States or transfer to a place that is not their home of record. These are just some of the many reasons that The American Legion will continue to advocate for these special families.”

Rohan also plans to visit patients at Landstuhl Regional Medical Center on June 1. She will present Operation Comfort Warriors grants to the LRMC Chaplain’s Closet, the adjacent USO and area Fisher Houses. The grants are worth a total of $20,000 and will purchase clothing, games, electronics, a pool table and gift cards for the post exchange and commissary.

The delegation will then head to Normandy, France, where it will observe the anniversary of D-Day and conclude their tour in Paris, the birthplace of The American Legion.