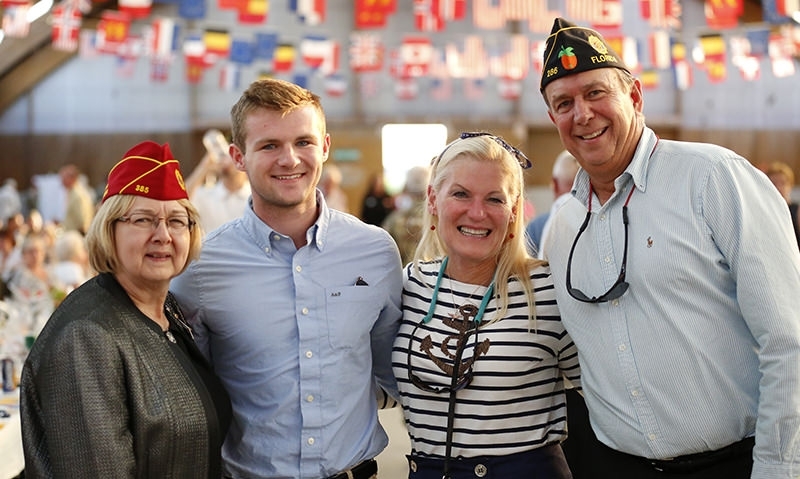 Bert Fletcher of Orlando, Fla., is on his way to the U.S. Naval Academy partly because of opportunities The American Legion gave him through Boys State and Boys Nation.

Vern Schmidt of Clovis, Calif., remembers that he once went two months during the vicious winter of 1945 and only took off his boots twice.

Somehow, those two experiences – that of a teenager dreaming of becoming a Navy pilot in the future and that of a world-changing veteran now in his 90s whose past paved the way for Fletcher’s future – converged in Ste. Mere Eglise, Normandy, France, Saturday evening.

“My dad and I are big history buffs,” said Fletcher, a Boys State and Boys Nation participant in 2017, on vacation with his family. “He’s retired Navy, and I am going into the Naval Academy in two weeks. We wanted to see the beaches and experience the history.”

The teenager said he studied French in high school, and that is helping him and his family get around in Normandy where he came “to honor the sacrifice of our veterans.” He said he is also impressed by the way the French respond to U.S. involvement in their gratitude. “They remember that we saved them from the Nazis. It’s great to see the memory is alive and well.”

His father, Charlie Frye of American Legion Post 286 in Orlando, Fla., expressed his gratitude for the Americanism youth program that helped. “Boys State and Boys Nation were so wonderful,” Frye said. “It opened up so many doors. It’s a fantastic program. I am so thankful to The American Legion for having put it on all these years.”

“Pretty much everywhere I go, I end up meeting somebody where an American Legion Americanism program affected a life in one way or another,” Rohan said. “It’s amazing.”

Rohan said that her Saturday evening experience at the annual banquet of Amis des Veterans Americain (Friends of American Veterans) – connected the dots between current Supreme Allied Commander-Europe, U.S. Army Gen. Michael Scaporrotti, to World War II veteran Vern Schmidt of Clovis, Calif., who fought through the winter of 1945 to defeat Hitler, to Fletcher, who is leveraging his Boys Nation experience into a future of service as a Navy officer.

“It’s amazing to see that respect that they give each other,” Rohan said. “I didn’t know what to expect, but it’s fantastic. I can’t wait for the rest of it.”

The commander and her group are scheduled to place wreaths at La Fiere Bridge, Normandy American Cemetery and the Lafayette Escadrille Memorial as the week progresses, in honor of all U.S. military personnel who have fought and died for the cause of freedom.