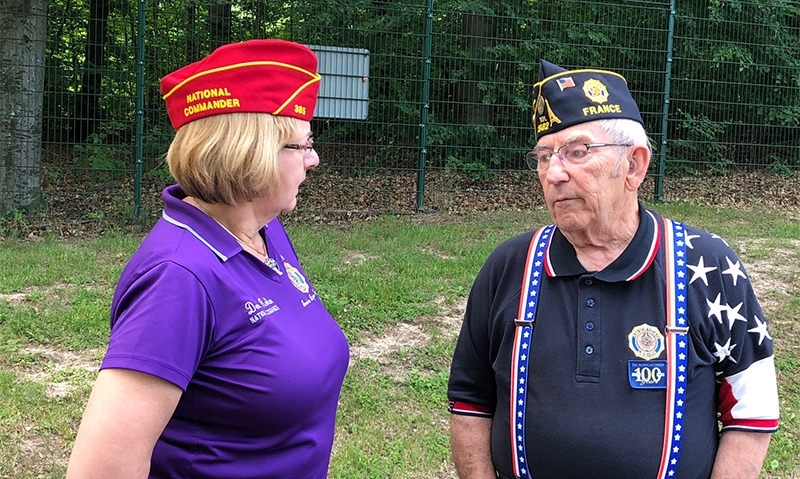 An estimated 20 veterans a day commit suicide. They are not statistics but real men and women who served their country. One man who nearly joined that group and is certainly not a statistic is Kenneth Aungst, an 81-year-old Vietnam veteran living in Ansbach, Germany.

The retired U.S. Army first sergeant survived three tours in Vietnam and earned two Purple Hearts. But it was the 2012 passing of his wife, Marga, that inflicted upon him his greatest emotional challenge.

“We were married for 54 years,” Aungst said. “For the first six months after she passed, I really considered suicide. I was going to jump off a bridge. That’s when I got involved in The American Legion. It gave me a purpose as a human – a feeling that I could help somebody. I started giving to my community, to Scouts, to the school. There are some forgotten people over here in Europe. It became my mission to remember them.”

Aungst volunteered for leadership positions at his American Legion Post GR 1982, and twice served as post commander. During his early days at the post, only about 10 people attended meetings. Now, about 35 to 40 attend and membership has grown rapidly.

“It really is like a family,” Aungst said about his Legion community. “For years military families had been forgotten. Wives really were not all that welcome back on bases in Germany while their husbands were deployed. It wasn’t fair. My little girl was only 18-months-old when I first deployed to Vietnam. You don’t get that time back. What The American Legion is doing for these families is so important.”

“Kenneth is a veteran that The American Legion needs, and it’s clear that The American Legion needs him,” Rohan said after meeting Aungst at a Legion cookout in Germany’s Patch Barracks last week. “It’s inspiring that our organization played a role in him not taking his own life. Every veteran suicide is a tragedy, but at the same time, every Kenneth Aungst is a blessing. We should all be energized in knowing that when we help a veteran, we could be saving that veteran’s life. You simply cannot find a higher call of service.”