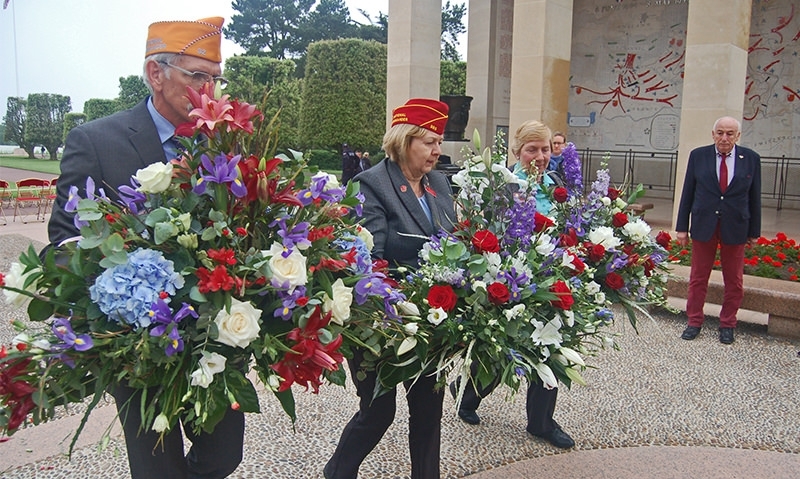 Robert Devinney of Lansing, Mich., was 20 years old when he entered the fighting late in the European campaign of World War II. Serving with the 82nd Airborne Division, he marched to the snowy front of northern Germany where his unit was quickly pinned down, far ahead of the rest of the division, and they were stuck. There, both of his feet froze to the ground and swelled. He could no longer strap on his combat boots.

He was evacuated to field hospitals and then to England where he recovered a couple of months later and was offered administrative duty. He rejected that. He had trained to parachute into the action and did not at that time have a combat jump in World War II. No more jumps were scheduled as the war in Europe drew closer to conclusion. But he wanted to get back to his unit and fight on the ground to be a part of Nazi Germany’s defeat. He eventually won his case and was returned to the front.

Devinney, a member of American Legion Post 12 in Lansing, was one of many veterans of World War II who gathered in Normandy, France, this week to recall the Allied invasion that liberated Europe from German occupation nearly three-quarters of a century ago. There, he and his fellow veterans of the so-described “greatest generation” were treated like celebrities. Men and women of all ages, including dozens of active-duty troops from multiple nations, and many French civilians lined up to hug them, shake their hands and kiss their cheeks.

“It’s indescribable,” Devinney said of the gratitude shown by the French people. “I was a Pfc. That was my highest grade. Now I get to talk to the commanding general of the 82nd Airborne (Maj. Gen. Erik Kurilla, who attended remembrance activities with dozens of his paratroopers). It was a one-on-one thing, and he was looking me up! You just can’t imagine. How in the world do you describe that?”

American Legion National Commander Denise H. Rohan was among thousands who made their way to La Fiere Bridge Sunday, where in 1944 some of the bloodiest fighting in the history of U.S. warfare occurred after D-Day by paratroopers and glider-entered soldiers. The annual parachute jump there re-enacted the low-altitude assault of June 6, 1944, just ahead of the famous beach landings that breeched Germany’s Atlantic Wall and began the march to victory.

Rohan and current Supreme Allied Commander-Europe Gen. Michael Scapparrotti were among those who spoke at the Iron Mike statue that overlooks the La Fiere Bridge battle field along the Merderet River. “We stand united and free because Allied soldiers were able to and willing to strap on 80-pound packs and jump in the night from C-47s, through storm clouds, into enemy fire,” Rohan told the crowd. “We stand united because when they landed here, these soldiers were able and willing to fight to the death for a cause greater than themselves.”

As events unfolded to recognize the 74th anniversary of D-Day, the American Legion Family group encountered hundreds of veterans, active-duty military personnel and European citizens, who the national commander specifically recognized. “As a former U.S. Army soldier and leader of America’s largest organization of wartime veterans, I thank the people of Normandy for remembering our fallen in the way that you do,” Rohan said. “I thank all our active-duty men and women assembled here today – from all nations – because you ensure that the hard-won freedoms that bring us together now are protected.”