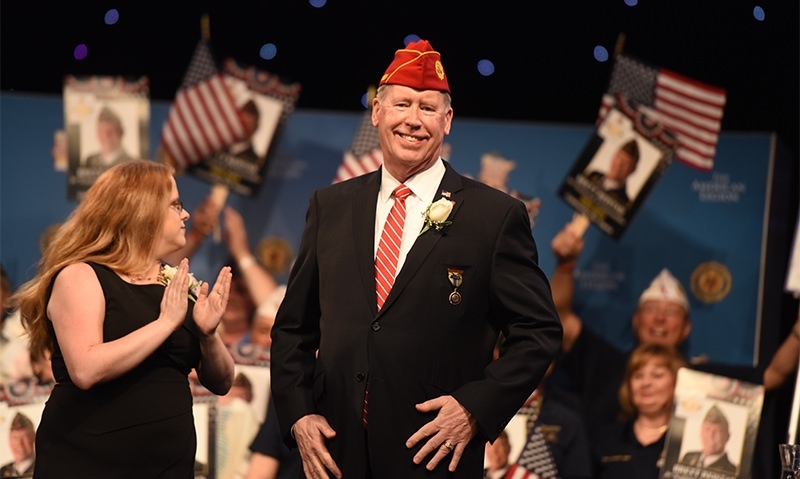 Newly elected American Legion National Commander Brett Reistad will lead the organization as it begins a celebration of its 100 years of service to veterans, the military, community, state and nation.

And while there will be plenty of time to look back at The American Legion’s many accomplishments, Reistad said the centennial celebration should be about more than that.

“Today begins a 15-month celebration of our centennial," said Reistad, a 37-year member of McLean Post 270 in McLean, Va. “A lot of history has been made in the past 100 years. This is a unique opportunity for us to reflect on our many accomplishments and share them with our friends, neighbors and communities.

“It’s also an opportunity for us to be a part of that history. My theme for the year is 'Celebrating Our Legacy,' but, it’s more than that. It’s also about charting the course for our future and remaining strong and relevant. Strength my friends, is paramount.”

To maintain that strength, Reistad said, means maintaining a strong membership and working together. He has experience leading that effort, having taken The American Legion Department of Virginia to an all-time high membership while serving as department commander from 2005 to 2006.

“That is why I have chosen ‘Team 100’ to be our centennial membership theme - to bring all our resources to bear, increase our membership and start our second century of service off on the right foot,” he said. “You, my fellow Legionnaires are ‘Team 100,’ and I need your commitment to achieve this success, just as you once committed yourself to serving your country.

Reistad praised what he said is the spirit and commitment of Legionnaires – both that of the organization’s founders and those currently carrying out its mission.

“Whether it be volunteering in a VA medical center, conducting funeral honors for our departed brothers and sisters in arms, volunteering at American Legion Boys State, or raising money for a Legion charity, you make a difference in the lives that you touch,” Reistad said.

A U.S. Army veteran who served from 1974 to 1978 in the 3rd U.S. Infantry Regiment, “The Old Guard”, at Fort Myer, Va., Reistad has a bachelor’s degree in criminal justice and spent 26 years with the Fairfax County (Va.) Police Department in suburban Washington, D.C. He served in patrol, investigative, forensic and administrative assignments – mostly in a supervisory capacity. He currently serves as a law enforcement services coordinator for the Regional Organized Crime Information Center, a component of the Regional Information Sharing Systems program, a law enforcement assistance program funded by Congress through the U.S. Department of Justice.

Reistad said there are many similarities between first responders and veterans. “We are all committed to public service – a commitment that requires the willingness to risk our own lives to perform our sworn duties,” he said. “And that’s exactly what the founders of our organization did more than a century ago. They sacrificed, fought and many were wounded to free Europe so Americans could be safe at home. It’s a scenario that has repeated itself in other parts of the world, in every war era since.

“From World War I to the current Global War on Terrorism, Legionnaires have responded to our national emergencies. Whether stateside or in a combat theater, we all sacrificed something to ensure that our liberties and our communities would be preserved.”

Looking back, Reistad said what The American Legion’s founders did in establishing the organization was “unprecedented. They formed a network committed to a half dozen bedrock principles. They included care for one another; support for the families of those who did not come home from World War I, as well as those who came home sick and disabled; (and providing) a support network for children and youth, who the early Legionnaires saw as the future of the nation and the key to strengthening the nation in the event of future national security needs.”

Reistad said the founders also promoted patriotic values, fought for a well-resourced and equipped military, and ensured that U.S. military sacrifices were not forgotten.

“Out of these principles arose what The American Legion calls its ‘Four Pillars’ — veterans, Youth, defense and Americanism,” he said. “Built on a strong foundation of God and country, under each pillar are programs and services undertaken at every level of America — from the local American Legion post to the department, to the National Headquarters and international U.S. military duty stations located in foreign countries.

“All the same values envisioned by the World War I generation are performed in communities, states, the nation and around the world today.”

Reistad said when The American Legion received its federal charter from Congress on Sept. 16, 1919, it was in part to fulfill functions the government would otherwise need to perform. Foremost, he said, is representation of veterans in the pursuit of Department of Veterans Affairs benefits, education, health care and respect from a grateful nation.

The drafting, promotion, passage and ongoing stewardship of the original GI Bill remains one of The American Legion’s most important accomplishments, Reistad said.

“When American Legion Past National Commander Harry Colmery distilled multiple government responsibilities into just 10 initiatives in the Servicemen’s Readjustment Act of 1944, critics declared it would break the United States Treasury,” he said. “Instead, the provisions approved in the GI Bill returned $7 for every $1 the government invested.

“The American Legion has worked with Congress over the decades to improve the GI Bill for subsequent generations of wartime veterans. The most recent example of this is the Harry W. Colmery Veterans Educational Assistance Act of 2017, which improves and extends GI Bill benefits for Post 9/11-generation veterans and their dependents.”

Reistad said that while the most recent GI Bill was meant to lift restrictions on the time a veteran must use the benefit – giving it the name the “Forever GI Bill” – “only in Washington does ‘forever’ NOT really mean ‘forever.’ Last month, the Defense Department announced a new rule which prohibits members of the armed forces with more than 16 years of service from transferring their GI Bill benefits to their dependents.

“We have a message to the Pentagon, Congress and the White House – veterans earned these benefits, and The American Legion will not stand by as you slash the intent of the Harry W. Colmery Forever GI Bill.”

Reistad said The American Legion will continue to honor its Four Pillars through such efforts as working to eradicate veteran homelessness, lobbying for a well-funded Department of Defense, fighting to hold together retirement benefits and health-care services for military retirees, and providing programs like Boys State and Boys Nation and the National High School Oratorical Contest to incentivize young people to take a strong interest in government, public service and constitutional awareness.

To commemorate The American Legion centennial, Reistad said the organization has focused largely on empowering its galaxy of local posts — each of which has its own legacy of service — to tell its centennial story at the community level and increase awareness of all The American Legion is and does.

“Each American Legion post is different, its own separate corporation, and its functions vary by community,” he said. “Some American Legion posts operate local ambulance services and hospitals. Some have blue-ribbon child-safety programs. Legionnaires in Mexico dedicate their time, money and efforts to disabled children there. In Pennsylvania, The American Legion’s Housing for Homeless Veterans program is a model of success for the rest of the nation. In Montana, The American Legion places markers along the roadways to remind drivers to slow down and be careful.

“The American Legion does all this — at the community, state and nation levels — because veterans believe they have an individual obligation to continue serving their country.”

Reistad said The American Legion’s centennial celebration is an opportunity to connect its legacy of accomplishments and significance in communities to a vision for the future. That includes a new generation of veterans taking on a greater role in the organization.

“Just as it was when the World War I generation handed the reins over to the World War II generation, then the Korean War generation, Vietnam and Gulf War, the future belongs to a new generation of veterans — those who have served in the War on Terror,” he said. “One by one, and in groups, these honorable wartime veterans are joining The American Legion, assuming leadership roles and advancing a vision of the future that matches that of our World War I founders — serve veterans, support the military, promote Americanism, and create healthy, educational opportunities for young people.

“Many are joining because they have been the firsthand beneficiaries of American Legion support in the struggle to resume civilian life after wartime service.”

The American Legion's values, conceived 100 years ago, are “as timeless as the common bond of military service across the generations,” Reistad said. “How The American Legion executes those values — the pillars — is certain to change as the future unfolds, but the underlying commitment to service, to community, state and nation, under the flag for which so many lives were given to ensure our nation’s freedoms -- will never change. It’s also a legacy – that under my watch – we will continue to celebrate.”