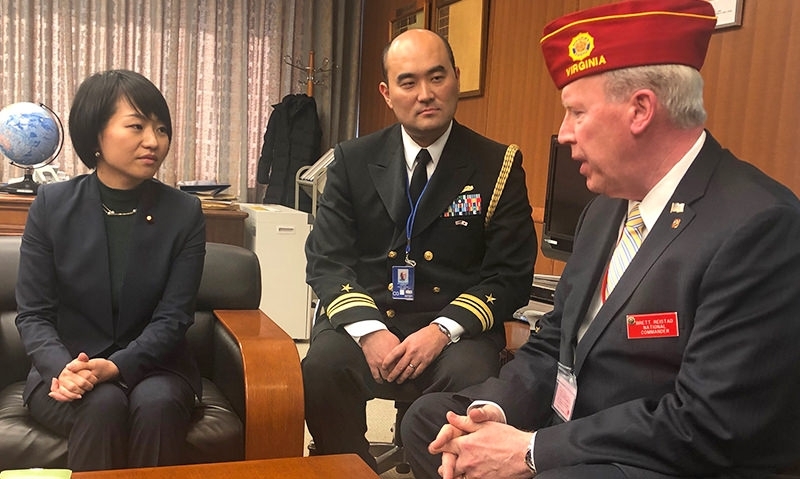 It's only fitting that after American Legion National Commander Brett Reistad left the continental United States on Dec. 1 for a tour of Pearl Harbor that he conclude his Far East visit three weeks later in Japan.

"The visits were really perfect bookends to a productive and fact-finding series of meetings with diplomats and military leaders which will enable The American Legion to become better advocates not just for our troops who are charged with fighting wars, but for our policymakers who are charged with preventing them," Reistad said. "Pearl Harbor is a permanent reminder that our country must never again take peace for granted and be caught off guard. Later during my visits, I was told repeatedly that our alliance with Japan could not be stronger. The United States and Japan have really gone from being the bitterest of enemies to the strongest of friends."

One relationship which is considerably more complicated and alarming is that of North Korea and the rest of the international community. "The president's patience is not limitless," Joseph Young, the deputy chief of mission in Japan told Reistad during the Legion delegation's visit to the U.S. embassy in Tokyo. "If we don't see some concrete actions by North Korea, we may have to re-evaluate our position (on denuclearization efforts there)."

In addition to concerns about North Korea, Young pointed out that Japan and Russia have never signed a peace treaty to end World War II hostilities with each other due to some disputed islands. Combined with aggressive behavior by China, the need for a strong U.S.-Japan alliance is not only understandable, but a strategic responsibility.

"The cornerstone of Japanese national security is the Japan-U.S. alliance, and going forward, I believe that it is very important and crucial to build a relationship with The American Legion to contribute to the stability of Japan and the world," Japan's Vice Minister of Defense Takako Suzuki said. Suzuki, who is also a member of Japan's House of Representatives, is skeptical of North Korea's willingness to end its provocations. "Even though there are more developmental moves between North Korea and the Republic of Korea, I believe that the threat has not changed even though there is some dialogue," she said. "Therefore in order to address those security issues, we have to consider the condition unchanged and pay special attention to that."

"I can't thank you enough for the military service that you have provided us for over half a century. There is so much going on in the Far East and our security environment," Tsuji said. "The tension has been building in the past decade and we need your help. We need this alliance more than ever not just to protect our two countries but the whole Indo-Pacific region."

Tsuji also thanked the United States for coming to his country's aid during "3/11," the day a 2011 earthquake and tsunami devastated the Fukushima Daiichi nuclear facility.

"Some people on our side criticize the Japan-U.S. military alliance and say it's never been tested. But it has," Tsuji said. "3/11 is one big example. That is how our relationship has been nurtured in the past."

Quality of life issues for U.S. military personnel stationed in Japan were also on Reistad's mind as he met with a group of sailors aboard the USS Ronald Reagan (CVN 76), an aircraft carrier home-ported at Yokosuka Naval Base. During the meeting, a senior chief with 22 years in the service said that he earned less than he did six years ago when he was stationed in the United States due to Japan's expensive economy and what many believe is an insufficient Cost of Living Allowance. Another sailor said that her deployment made it impossible to complete a course and was causing problems with her GI Bill benefits.

"These are issues that The American Legion can and will bring back to Congress," Reistad promised.

Reistad also met with the aircraft carrier's commanding officer, Capt. Pat Hannifin. Hannifin was very straight forward about the Reagan's ability to be an instrument of peace or a weapon of war.

"At sea, the focus of effort is ensuring that the Reagan is as lethal as possible," he said. "We can be your best friend or worst enemy. You pick it."