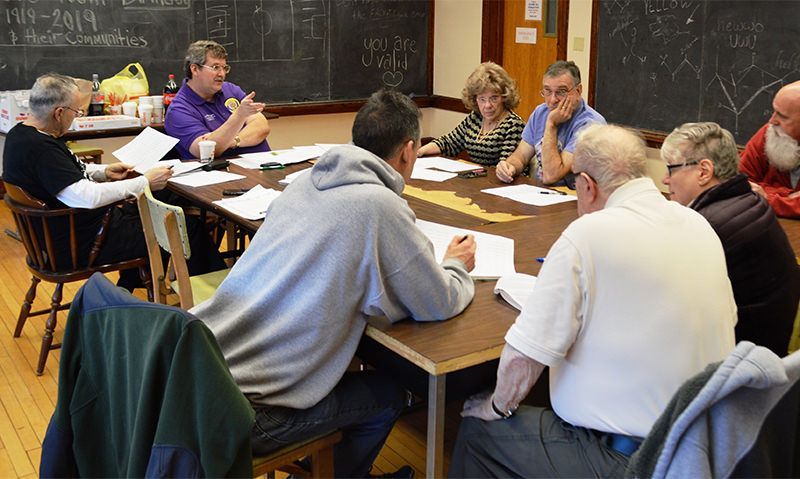 Earlier this year, American Legion National Commander Brett Reistad issued a call to action to American Legion posts. He asked Legionnaires to perform a Buddy Check during the organization’s National Week of Calling around the Legion’s 100th birthday. Reistad wanted to use the Buddy Check as a way to reach out to members and former members who may need help.

Buck-Dubiel Post 101 in Somers, Ct., answered the national commander’s call. From 3-8:30 p.m. March 13 and March 16 a group of volunteers from Post 101 got together to make phone calls to check on fellow members of Post 101, and other Legionnaires in the area who are members of the department headquarters post or who had allowed their membership to lapse.

Post 101 Commander David McCaffrey and Post 101 Public Affairs Director Sherri Marquis spent an hour before each Buddy Check session going over the primary objective of the effort – wellness checks on the veterans – and explained the process of documenting and drafting scripts and tailoring them to the callers’ personalities to sound genuine.

Marquis said the Buddy Check benefitted both sides of the phone calls. “It was an experience every buddy check team member thought was fulfilling and very much needed,” she said. “We learned of members who were in poor health, needed assistance with VA benefits, (and) wanted to attend meetings but had no means of transportation, and were home bound and lonely and could use a visit/camaraderie.

“Some were unable to volunteer due to being caregivers or having demanding lives and were happy with contributing just by being a member and others were grateful for the call, had questions about the Legion mission and asked what Post 101 was doing in the future in which they could be involved.”

The post provided snacks, pizza and beverages to the volunteers, who went through after-action meetings to review how to more effectively reach Post 101 members and how to best help those they’d reached based on the information provided during the phone calls. Post 101 also had an executive committee meeting the following week to identify action items and assign responsibility based on needs and feasibility.

“Our team realized there is still much work to be done in caring for our service buddies,” Marquis said. “It becomes challenging when the resources are scarce yet the need is high. Post 101 is targeting sources for assistance within our community and has been fostering a culture of compassion and empathy.”

“There is nothing much better than connecting with others and letting them know that you care,” Marquis said. “We had fun while working as veteran volunteers on the Buddy Check. Fun at work matters. After all, God gave us each other to walk alongside, encourage and spur one another.”

In addition to the Buddy Check, Post 101 also helped celebrate The American Legion Centennial by joining with other Department of Connecticut Legion posts in presenting local public libraries with a history of The Connecticut American Legion Family from 1919 -2019. The date chosen represents 100 years since the Legion's first caucus in Paris, France, March 15-17, 1919.

Post 101 presented theirs to the Somers Public Library. “The ceremony was small but memorable, reflective of the Legion's ongoing mission to connect with our Legion family and our communities for the next 100 years and beyond,” Marquis said.