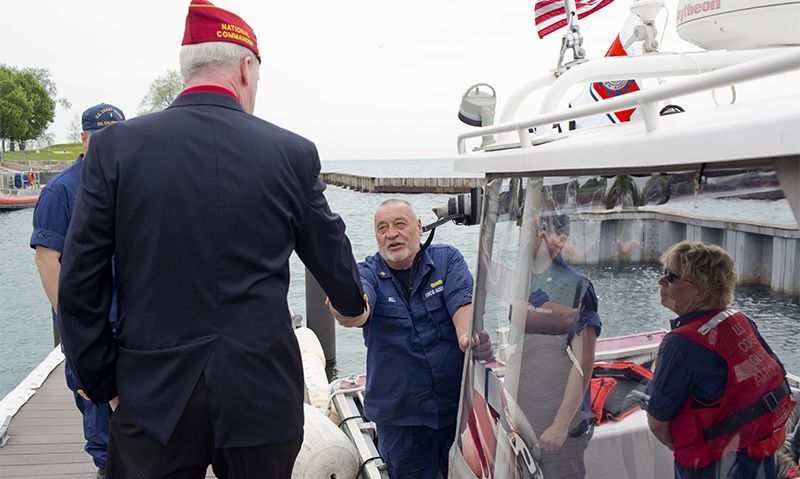 When The American Legion announced it was providing expedited Temporary Financial Assistance (TFA) grants to Coast Guard members with minor children in the home who were financially affected by last winter's government shutdown, Department of Illinois Membership Director Chad Woodburn shared the important message on Facebook. The post went viral and reached Chris Roggy at the U.S. Coast Guard Station Calumet Harbor in Chicago. Woodburn and Roggy worked together to help Coast Guardsmen at the station receive TFA grants. As a result of the working relationship and support, Roggy invited The American Legion to visit the station anytime.

“Thank you for all your help with the (TFA) grants for our junior members. It was a big help; it was awesome,” said Roggy, a machinery technician first class and Legionnaire. “It was a hard time for younger people who don’t really have savings accounts.”

Reistad was in Illinois for his official visit with the department. His visit to Coast Guard Station Calumet Harbor with department leadership included a brief insight into the station's mission and a tour from Roggy, Commanding Officer Matt James and Chief Petty Officer James Doll.

Coast Guard Station Calumet Harbor is the busiest station in the Great Lakes that works closely with the Chicago Police Department and Fire Department. On average they do between 150-250 search-and-rescue cases – with 10,000-plus registered boaters on Lake Michigan, search and rescue becomes their main focus.

“What I love about the Coast Guard and the missions we have is we focus more on search and rescue, and I like to help people,” said Doll, an 18-year Coast Guardsmen and Legionnaire who recalled docking in Kodiak, Alaska, and all the crew going to Post 17 for lunch. The American Legion “is a really good organization to be a part of.”

“We really love serving this city, we love serving the state of Illinois,” said James, a 24-year Coast Guardsmen. “We have an awesome team here. You should be very proud of the quality of young people we have working here.”

There are 42 active duty on staff and 25 reservists that operate like a firehouse with two days on, two days off and sliding weekends. No one lives full time on base.

With many Coast Guardsmen living off base, “that was one of the things we had to take into consideration when we offered them Temporary Financial Assistance is the fact that a lot of them still had to pay their mortgage. They have financial responsibilities,” Reistad said.

Reistad has now visited four Coast Guard stations since The American Legion provided more than $1 million in non-repayable TFA grants that assisted 3,120 children of 1,173 active-duty Coast Guard servicemembers. His visits have been “important to The American Legion to have some perspective on how they were affected by the government shutdown and their lack of pay. So coming here I have a better understanding of the duties of a Coast Guard station,” Reistad said.

During the Coast Guard tour, Reistad and Illinois Legionnaires stepped aboard a 45-foot Response Boat-Medium (RB-M) used for search and rescue. James said something the Coast Guard does very well is standardize. As an example, equipment on a 45-foot RB-M boat in Hawaii operates the same as the boat in Coast Guard Station Calumet Harbor. “I would know exactly where every piece of equipment is stowed,” James said. “So when you see things like with Katrina or hurricanes in Houston, what makes us successful is that we can grab Coasties from any place in the country, you could build a crew from one person out of every corner of the country, and within five minutes they would be able to operate together. They speak the same language, they speak the same standardization.”

Donna Manella, a member of Post 134 in Morton Grove, Ill., was stationed at Coast Guard Calumet Harbor in the late 1980s. Her father, Thomas Duzmal, also was stationed there during his time in service. She began reminiscing with Roggy about her time at Calumet Harbor and mentioned how her father took a porthole from a decommissioned ship as a souvenir, which used to hang in the station’s mess hall. “Let me show you what we did with the porthole,” Roggy said. “You are going to like this.”

A hole was cut in an office door at the boat maintenance facility and the porthole was placed in it. “Oh my gosh I have to take a picture of this. My dad is going to be so happy,” Manella said.

The porthole was found on a shelf in the maintenance building by Roggy when he first reported to the station three years ago and knew he had to do something with it.

Roggy is an Iraq veteran and a Paid Up for Life member of American Legion Post 748 in Anitoch, Ill. “I joined The American Legion for the camaraderie, the brotherhood and taking care of other servicemembers, making sure that they’re OK. If I ever need help a perfect example is when the TFA grant came out. I didn’t end up needing it, but a lot of our junior members did. If (the shutdown) would have went on for two more months I would have needed it as well.

“(The American Legion) is just a great organization.”