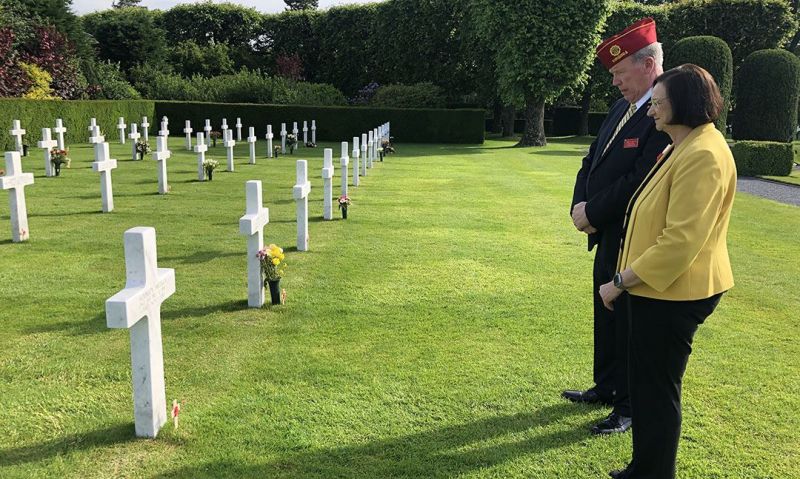 After visiting symbols of the Cold War such as Germany’s Brandenburg Gate, American Legion National Commander Brett P. Reistad met with military leaders during the past several days to discuss American readiness for adversaries emanating from Europe and Africa.

“The consensus among our delegation is that our military members are spectacular, but they still need our support,” Reistad said. “The United States alone simply does not have the resources to fight every possible conflict that could occur in Africa and Europe. It takes strong alliances and diplomacy. But in addition to persuading our allies to properly fund their own defense budgets, we have to commit to making our warriors whole. That means lowering any unnecessary stress.

“Social media makes it difficult for servicemembers to decompress and fully focus on their mission. Daycare costs, for instance, are outrageously expensive for military members living in foreign economies. There are issues with military construction and Morale Welfare and Recreation. These are items that The American Legion plans to address with leaders in the Pentagon, the U.S. Congress and even the White House.”

While Reistad frequently visits military bases in the United States, it was his visit last year to the Far East and his current tour of Europe which allows him to hear about the unique challenges facing U.S. troops overseas.

“Being here in the European theater, we’ve got to see the change in the operating environment over time” said Air Force Col. Brad Spears, 521st Air Mobility Operations Wing commander. Spears mentioned that increasing communication with the home front has led to some tougher mental health challenges among the ranks and a need to decompress.

“Social media keeps them connected to all their problems,” he said. “It used to be once you deployed, whoever stayed back took care of all the problems and you worried about the fight that you were in. Now they stay connected to their problems, which is a challenge.”

An Air Force nurse stationed with the 86th Aereomedical Evacuation Squadron at Ramstein Air Base mentioned that child care options are very limited to parents stationed there. She told Reistad’s delegation, which included staff members from national headquarters and Legionnaires from the Department of France, that she has two children who have been on the installation’s daycare waiting list for several months.

“There just is not enough day care for our families,” she said. “I pay $900 per child each month. It is extremely stressful to subject military families here to the local German economy.”

“These are issues that The American Legion can take to Congress and ask members to fix,” said Lou Celli, American Legion Executive Director of Government and Veterans Affairs. “Most members of Congress, like the American public, want to support our military. That’s why we are here: to see firsthand what our military members need and what requires immediate attention. That’s also why we testify before Congress, not just to help veterans who served, but military members currently serving.”

Although the 75th anniversary of the Normandy invasion has been dominating headlines, leaders from the American Legion Family also paid homage to fallen heroes from other battles by placing wreaths at Luxembourg American Cemetery, Flanders Field American Cemetery and Mardasson Memorial at Bastogne, Belgium.

“Preserving our memories and incidents of our associations in the great wars isn’t a choice, it’s a promise,” Reistad said. “Every time we recite the Preamble to The American Legion Constitution, we take that pledge. It’s one of the reasons our founders created The American Legion. Even after years and generations pass, these heroes must be remembered.”

American Legion Auxiliary National President Kathy Dungan noted the significance of Flanders Field. “Normandy is undoubtedly important and we look forward to honoring those heroes. But we must not forget about World War I,” she said. “Flanders Field is where poppies have become such a cherished symbol of our fallen veterans. It will always be hallowed ground to The American Legion Auxiliary. The war ended a century ago, but their sacrifice is timeless.”