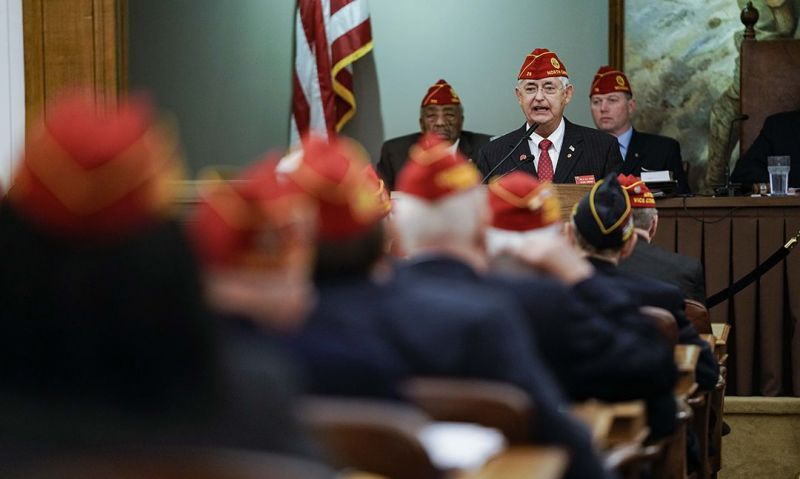 The American Legion’s 100th Anniversary Commemorative Coin series was released on the Legion’s centennial birthday, March 14. However, the sale and production of the coins will cease after Dec. 31.

With “A Foundation for the Future” as his theme, National Commander James “Bill” Oxford reminded members of the National Executive Committee (NEC) and other leadership that “preparing for the future should never mean we should forget who we are or where we come from. So let’s not forget what an honor this coin series has been. We should maximize the esteem and recognition that this country has bestowed upon our American Legion in honor of our centennial.”

In Oxford’s opening remarks to the NEC during Fall Meetings at National Headquarters in Indianapolis Oct. 16, he added that the centennial coins make a great fundraiser, a gift for the upcoming holiday season and a conversation-starter to share about the Legion’s four pillars, programs and advocacy efforts.

At the start of the new year, Oxford will shift his fundraising emphasis from the centennial coins to The American Legion Veterans and Children’s Foundation, which has a fundraising goal of $25 million. Auxiliary National President Nicole Clapp made a significant contribution to the foundation by handing a $10,000 donation from the Auxiliary to Oxford following her remarks to the NEC.

“What a great life-changing resource this could be for future generations of veterans and their families,” Oxford said. While $25 million is a lot, a goal of that nature was achieved by Legionnaires in 1924 with a membership of 800,000. They raised $5 million for the Endowment Fund, which Marketing Commission Chairman Mike Rohan of Wisconsin said is $30 million in today’s dollars.

“We can do this. We owe this to our veterans and our children to do this,” Rohan said during his remarks to the NEC. Over the next several months the Marketing Commission will be working with departments on fundraising efforts, including asking department commanders over the next seven years to take this on as his or her project.

“This is historic; you can be part of history helping us raise $25 million for the future of our children and our veterans,” Rohan added. “We can do this.”

Oxford reiterated that it can be done when “we have strength in numbers.”

For the 2019 membership year, 63,000 new members were recruited into The American Legion. Oxford’s goal for 2020 is 100,000. “With your help, we can make it to 100,000 (new members). Let’s make it our goal,” Oxford said. “And thanks to the LEGION Act, our family can get dramatically bigger” as there are an estimated 4.2 million veterans now eligible to join The American Legion.

According to the Oct. 4 American Legion membership report, membership is up by more than 7,000 compared to this time last year. “But it’s still very early and we must continue the momentum throughout the year. We had 3.3 million members in 1946. There is no reason to believe that we can’t someday reach that level again. But we must be visible in the communities.”

Oxford ended his remarks with words he spoke during his acceptance speech following his election as national commander during the 101st National Convention in August.

“So let’s count on each other as we build a Foundation for the Future to ensure that The American Legion can have a second century that our founders would be proud of.”