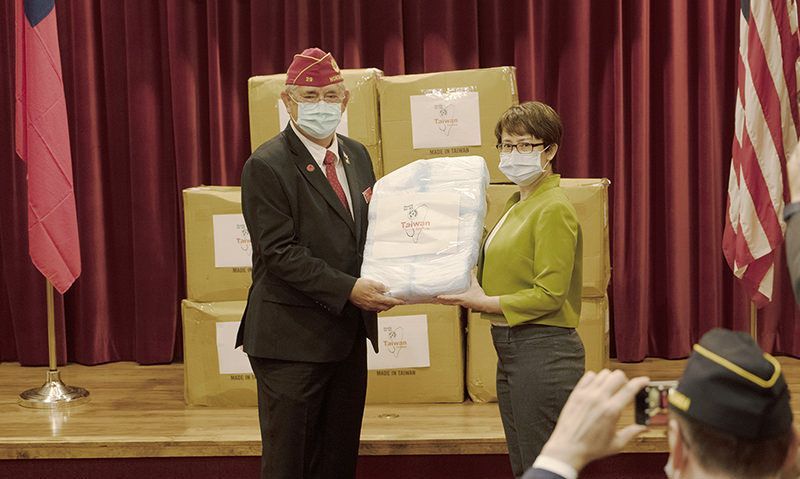 “This gift of masks will save lives,” Oxford said in his remarks. “Even before COVID-19, it was not unusual to see people – mostly in the Far East – wear facemasks out of consideration for others. It truly is a selfless act. We will ensure that veterans across the country receive these masks.”

“We are proud of our longstanding friendship with the American Legion,” Hsiao said. “Last August, President Tsai addressed the 101st American Legion National Convention in Indianapolis, where she spoke about our joint values, as well as the sacrifices our veterans have made for democracy and freedom in both our countries.”

Rep. Ted Yoho, R-Fla., also attended the event. He addressed the audience on the importance of the relationship between the United States and Taiwan and the commitment of both nations to freedom, democracy and human rights. “I stand here between two flags of two countries that represent peace, democracy, liberty and freedom,” he said. “Those will never waiver.”

The relationship between Taiwan and The American Legion was furthered during the national commander’s trip to the Far East in 2019, when the delegation from The American Legion traveled to Taiwan. While there, Oxford met with President Tsai Ing-Wen to discuss relations between the two nations and the shared values of freedom and democracy.

“When we think about the world situation as it is today…we come to understand the value of our alliances and our friendship,” Oxford said during the ceremony.

This event was about more than the masks, said Hsiao. It’s about a shared commitment between Taiwan and the U.S., as well as a commitment to those who serve in the armed forces of both countries. “Today, we have brought 250,000 medical masks from Taiwan to donate to The American Legion, in part to thank them for their service to veterans and many communities here in the United States," he said, "but also as a symbol of friendship to jointly work to keep our communities and our veterans safe and healthy.

“We all owe a debt of gratitude to those that have served in defense of our many shared values.”