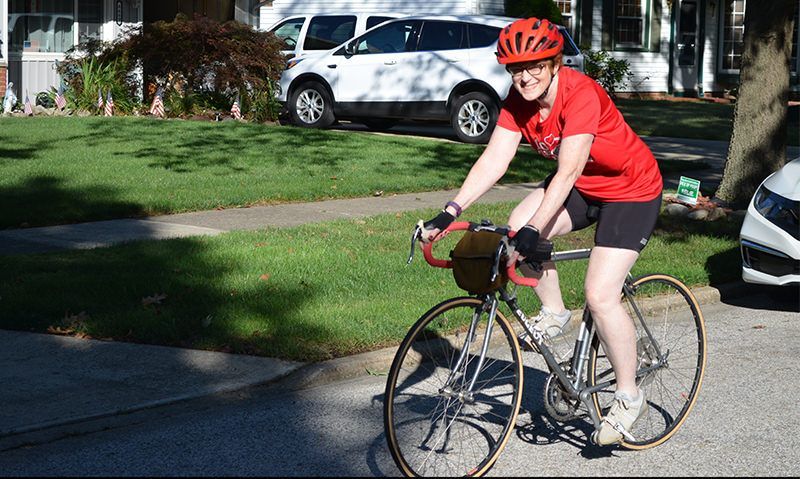 American Legion Auxiliary member Cindy Boehnlein continues to ride her bike and has her sights set on 700 miles.

The American Legion Family that walks, rides or runs together, stays together.

Or, at the very least, together they support veterans and children, and improve their fitness, as part of American Legion National Commander Bill Oxford’s 100 Miles for Hope campaign.

On Aug. 3, Oxford launched the 100-mile challenge, asking Legion Family members to cover 100 miles in the next 100 days through Veterans Day by walking, riding, running, hitting an elliptical or any other way they can dream up. Sons of The American Legion Commander Clint Bolt and American Legion Auxiliary President Nicole Clapp also began their journeys that day.

Participants can still register for $30, roughly half of which goes to benefit the Veterans & Children Foundation. The other half of the fee covers a slick tech shirt, commemorative sign and shipping costs.

Holly Lewis, adjutant of Post 557 in Wintersville, Ohio, has finished her 100 miles by walking daily and twice-weekly bike rides.

“I felt the challenge as a whole was a great way to get everyone out of the house and moving again,” she said. “It's for a great cause and it works wonders for the mindset to move every day.”

Lewis was among those who joined the Department of Ohio for a special Zoom meeting Aug. 29, bringing together walkers, runners, riders and others virtually. “I joined the Zoom because it was a fun way to showcase how technology can be used creatively.”

Participants put in some miles for 30 minutes then joined the Zoom meeting on Facebook where they shared their progress.

“Our event was a success in that we had a nice group of diverse members share their journey of miles since starting the challenge,” said Danya Beyer, historian for The American Legion Auxiliary Department of Ohio. “Everyone was wearing their shirts, which they declared was a good public relations tool to generate awareness and opportunity to accept donations to the Veterans & Children Foundation.”

The campaign has also inspired Legion Family members to safely return to engaging with their communities.

“The kickoff by National Commander Bill Oxford started a momentum of ideas to get out and get moving on our programs, interacting with members, talking with the community while practice social distancing,” Beyer said.

Cindy Boehnlein is among those who is going above and beyond to support the campaign.

“I jumped at the chance to participate in this event as I needed to challenge myself physically and to fundraise for accounts my unit doesn't usually donate to,” said Boehnlein, a member of American Legion Auxiliary Unit 421 in the Department of Ohio. “I have even gotten my husband to participate for the 100, and I am seeing a change in his health for the better.”

For her 100 miles is only a starting point. She is going well beyond the 500 miles and the fundraising that is part of the registration fee. She was inspired by the support her son and daughter-in-law received from an American Legion post in Herndon, Va., when they needed help paying their daughter’s spinal surgery bill. “This is why I am giving back to our Legion Family.”

Boehnlein continues to ride her bike and has her sights set on 700 miles. Even better, she has extended her own personal challenge to family and friends, asking them to pledge and donate for her extra miles.

“My extra miles and donations are going 50/50 to the American Legion Child Welfare Fund and the Auxiliary Emergency Fund,” she said.