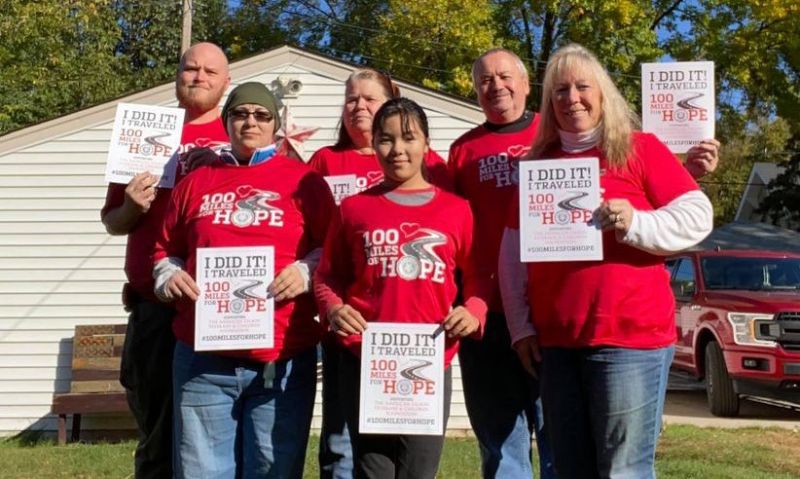 Teresa Ash, first row far right, and her family and friends have embraced the healthier lifestyle they discovered by participating in The American Legion's 100 Miles for Hope campaign.

Teresa Ash had been a pack-a-day-smoker for 40 years before being able to quit on Flag Day. “I was overweight, I was not breathing well.”

Still, she needed something extra to keep her from reverting back to the habit that began as a teen when she took her mom’s Kool filter Kings.

“It’s kind of crazy but it timed perfectly for me,” she said, pausing. “Because I was quitting smoking. One of the things I did as a smoker would be to pace around. I did it outside and my family would come out with me and talk. I would be pacing or moving. When I decided to quit smoking, everyone told me that I had to change all my habits.”

But Ash knew others who changed their habits when they quit smoking, “and it didn’t work out for them.”

Instead, she continued everything — without the cigarettes. “Everybody would continue to come outside with me,” said Ash, a member of Christie DeParcq Post 406 and vice commander for The American Legion Department of Minnesota. “I would just pace, continuing to do what I did when I smoked. That’s how this whole thing started.”

Now, she averages about four miles walking a day, admitting that she was pacing during the phone interview. “I feel so much better. I really do. It was wonderful that my family was so supportive of me.”

There is still time to get involved, join the challenge and help meet Oxford’s goal of 5,000 participants by registering at Emblem Sales. Participants will receive a tech shirt and proceeds will help American Legion service officers and military families with children in need through the Veterans & Children Foundation (V&CF).

She has seen changes in not only herself but her family members. When she smoked, her family hung out with her outside as she paced during smoke breaks. Now, they walk with her.

“Everyone is feeling better,” she said. “I’ve lost 30 pounds since I quit smoking and started walking. My daughter works for the post office so she is constantly on her feet and on the go. My perfect husband walks with me and he has lost weight. My daughter’s boyfriend has felt much better.”

Joining her on her journey are:

• Her husband, Michael Ash , an Air Force veteran and also a member of Christie DeParcq Post 406.

• Her daughter, Amanda England, an Army veteran and Post 406 member.

While the 100-mile challenge concludes on Veterans Day, Ash and her family will keep up their commitment.

“We absolutely will,” she said. “You feel better. You feel healthier. And you want to live longer and be stronger to do things. Michael and I go God, family and American Legion. We work to help veterans and we need to be healthy to do that. This 100 Miles for Hope really just came at the right time for us. Everything just fell into place.”