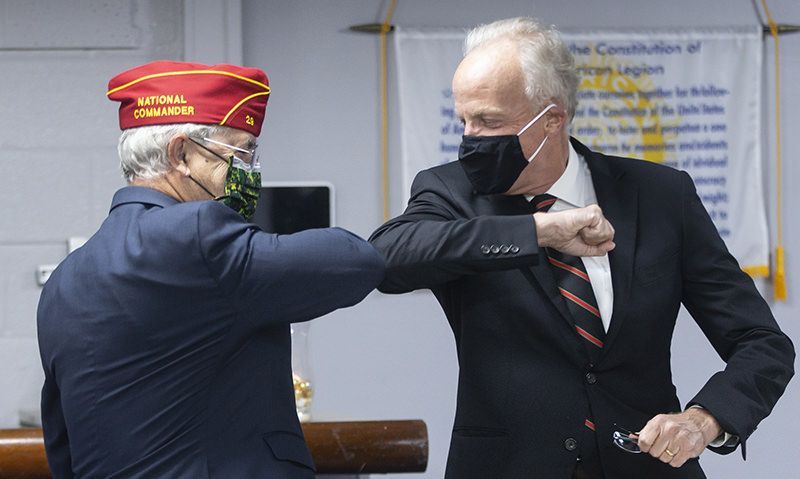 “The COVID-19 crisis has interfered with our ability to travel,” Oxford said. “While I have resumed some department visits, it’s important that Legionnaires prioritize safety in order to hold events responsibly. I was honored that Sen. Moran believes that The American Legion is important enough to meet with us during my visit to his state. He made clear to me over dinner that serving veterans is one of his top priorities as a senator. He also seemed open to supporting legislation in Congress that would designate a Buddy Check week.”

“I became the chairman of the Senate Committee on Veterans’ Affairs in January,” Moran said. “I want to make sure that my priorities are their priorities. What I know about veterans’ needs are based on conversations that I have and that they have with my staff. What we decide to prioritize in our committee, what we work to get passed through Congress and signed by the president are things that Kansas veterans talk to me about.”

Moran added that he is often able to gauge veterans’ opinions through his relationship with The American Legion.

“We talk to veterans, we listen to veterans but we know that The American Legion speaks for veterans, and we trust and respect what they have to say,” Moran said. The senator also said that he was “anxious to review” Buddy Check legislation with his staff.

“We certainly support the concept, the idea of recognizing the importance of having a buddy,” he said. “Particularly in today’s world with COVID-19 isolation and the challenges that we see with those who served in recent wars and wars of the past.”

Oxford arrived in the Sunflower state on Sunday. He begins a visit to the Department of Wyoming Saturday. “It’s an honor to have the national commander of The American Legion with us in Kansas,” Moran said. “I appreciate the efforts that the Legion makes in staying connected with its members … It’s an honor to pay my respect to veterans and especially the veterans who help other veterans, which is what The American Legion does.”